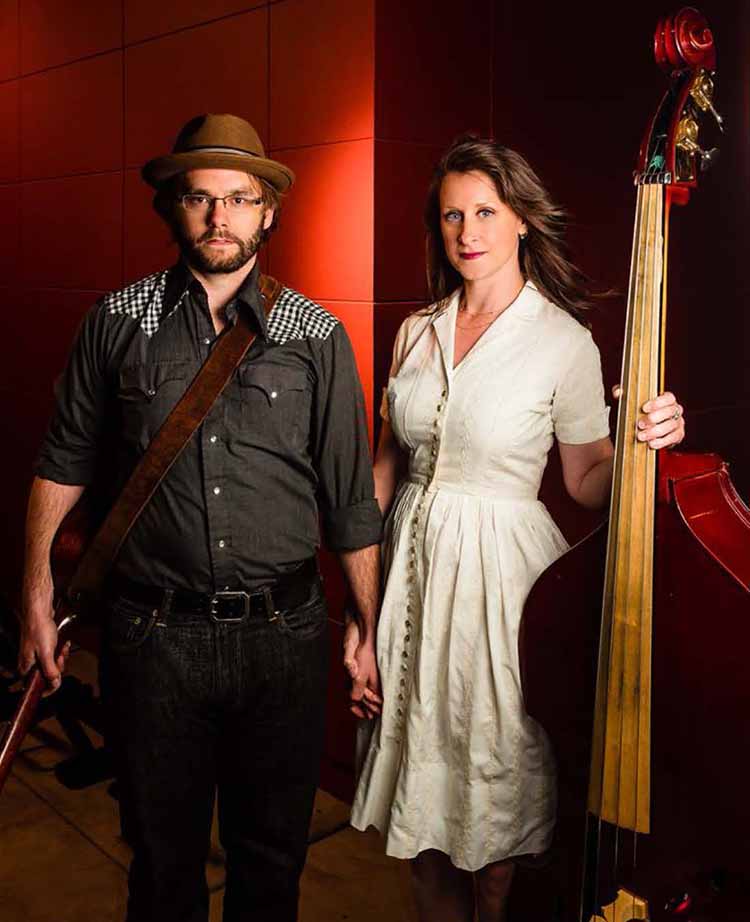 UKIAH 2/2/2017 — Sam Misner and Megan Smith will perform this month at the Ukiah Methodist Church, to raise money for the church and for Plowshares, the local soup kitchen and a hub for homeless services. This is part of the church’s “Universal language music concert series,” which seeks to build bridges between cultures “with music, not committees.” Here’s a press release for the event:

Tickets available at Mendocino Book Company and at the door.

With soaring vocal harmonies and story-filled, poetic songwriting, Sam Misner & Megan Smith’s sound harkens back to the bedrock of modern American rock & folk. Paying tribute to strong influences like Simon & Garfunkel, The Band, and Buffalo Springfield, they invent a sound all their own, seducing listeners with music that captures longing and belonging in the same moment. Their partnership in music is a search for meaning. The songs yearn for connection, ache for understanding, relish in mystery, and rejoice in creation. In a world that often feels to be crumbling down around us, they dig deep, and find hope in simple things, in the beauty that surrounds us all.

With their fourth release, Seven Hour Storm, Misner & Smith have created an album of vivid, poetic songwriting, filled with some of the finest harmony singing around. Working with producer Jeff Kazor (The Crooked Jades, Richard Buckner) and engineer Bruce Kaphan (David Byrne, REM, The Black Crowes) they have penned an album with lush, yet subtle arrangements, filling out an already rich sound that the duo is known for producing live.

Seven Hour Storm has the same timeless quality as some of the classic albums in folk and rock, and while there are certainly stand out songs on the record, this is an album that begs to be listened to from start to finish. Each song is a story, a journey, a place, a time, an experience. There is nothing general in the songwriting, nothing vague. The imagery is sharp, and the lyrics plumb the depths of emotions with an ease and honesty that is personal and at the same time universal. But this isn’t an album of words only—it is filled with melodies and harmonies that at once sound familiar and new, matching the lyrics every step of the way. The voices lock in together, and without disappearing into each other, they soar with power.

With more fleshed out arrangements, and added instrumentation, the new record is a logical progression for Misner & Smith. Their music has never been easy to classify or pigeonhole into one genre or another. They’ve lived in between the lines for years. In many ways, this is continuing what they have done from the beginning, and listening to Seven Hour Storm will only make the listener want to hear what came before. This path leads back to their previous releases Misner & Smith Live at the Freight & Salvage (2010), Poor Player (2008) and the duo’s debut album, Halfway Home (2004). All three of these albums are a testament to the strength of their partnership, and draw from the same well as their newest offering, with a pared down feel of the duo at its core: two voices, and two instruments—which is where it all began.

It was an entirely different art form that brought these two together in the first place. Having separately studied and worked for years as actors in theaters around the country, they met for the first time at a Shakespeare festival in California in 2002. Though the seeds for their future collaboration may have been planted then—in an outdoor amphitheater surrounded by the poetry and prose of Shakespeare and Chekhov—it took two more years for the musical bond to be forged, when the two were cast in another show together in the Sierra Nevada foothills of California.

This time it wasn’t the spoken verse of the Bard that was at the center, but the verses penned by legendary American folksinger and songwriter, Woody Guthrie. Through several weeks of rehearsals, and an extended run of the play Woody Guthrie’s American Song, Sam and Megan discovered a mutual love of roots music, and in particular, harmony singing. With intricate, often 5-part vocal arrangements of Guthrie’s songs as the backbone of the show, the special blend that Misner & Smith have become known for became evident right away. Since then, the two have acted in the play over a hundred times around the country, including runs at venues such as Marin Theatre Company, The Freight & Salvage Coffeehouse, The Colorado Shakespeare Festival, among others.

Balancing their lives as musicians and actors is no easy task—and often more like a juggling act. Yet storytelling is at the heart of both, and may well be the common thread running through all art. Inspired by both music and theater, their influences contain equal parts playwrights, songwriters, actors, and musicians.

Crafting songs rich in meaning and texture, Misner & Smith’s sound is anchored by their unique vocal harmonies and evocative lyrics. They tour extensively, both at home and abroad, and in 2007, their song “Madeline (Paradise Cracked)” won the West Coast Songwriters Association’s Song of the Year.