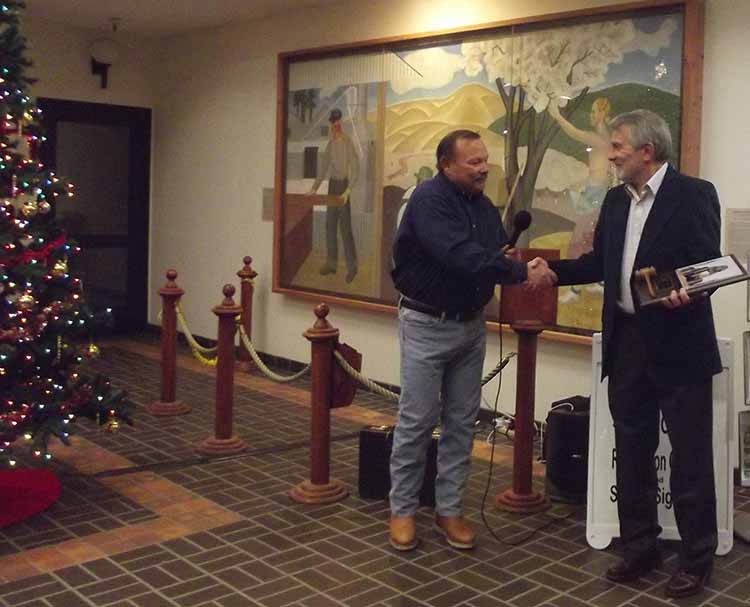 UKIAH 1/3/2017 – For the first time in a year, Steve Scalmanini did not meet with Ukiah City Manager Sage Sangiacomo to go over the agenda for the next Ukiah City Council meeting. That’s because, as of December 7, he’s no longer mayor of Ukiah, a position he held for one year starting last December. The mayoral position now falls to councilman Jim Brown, who served as vice-mayor during Scalmanini’s tenure. The Mendo Voice caught up with both men to ask about their thoughts on 2016 and what they hope to accomplish in 2017.

Scalmanini spoke mostly about the infrastructure projects the council approved in the last year, while Brown hoped to wrap up some longstanding disputes, get a Costco, and start fixing the streets. In the recent election, Ukiah voters passed a half-cent sales tax increase, with an advisory measure to use the additional taxes collected on street repair.

“Getting the street repair tax passed was a milestone,” Scalmanini said. “I’m glad we did that.” The crosswalk on North State Street at Garrett, completed on July 12, was also a project he counted among one of the successes of 2016. But the long-time environmentalist was also happy to offer an anecdotal report on the Tesla supercharging stations near Alex Thomas Plaza, which the city council approved in August of 2015. “Yesterday with my own eyes,” he began, “I should have taken a photo. I saw four Teslas charging at the same time!”

“I didn’t expect to have the recognized influence as mayor to help solve problems that the public brought up, but it was helpful” in some instances, he said. He recalled helping residents in a cul de sac at the end of Cleveland Lane figure out how to keep their on-street parking. The street was being narrowed due to the construction of the Sun House senior housing complex, which broke ground in March of 2016. Work on the complex is still underway. “I really just helped guide guide others to solve that,” he remarked.

For 2017, the former mayor plans to volunteer himself for a committee to look into what it would take for Ukiah to become a sanctuary city for undocumented immigrants.

Shelter for vulnerable people has been an ongoing concern for the 65-year-old Scalmanini, who volunteered this year and last year on the emergency winter homeless shelters in Ukiah. “I was just doing little things,” he said of his work on the drywall inside the shelter at 1045 South Street and assembling a storage shed outside. The assembly manual for the shed gave him and another volunteer the impression that putting the structure together would take just a couple of hours. Four days later, “As soon as we were finished, they said, I think we need another one,” Scalmanini recalled, laughing.

In his remarks to Scalmanini on December 7, Brown thanked him for the touch of humor he brought to the city council meetings, which are not always known for their sense of rollicking festivity. In his hopes for the new year, 61-year-old Brown, a retired probation officer, spoke briskly of “big ticket items” he hoped to dispose of. Reached on Monday, January 2, the new mayor said he had just come back from a camping trip to the Pomo campground on the coast. “I used to be a tent guy,” he said, though this time, he chose to spend the holiday weekend in a camping trailer.

The first thing he mentioned when asked about his plans as new mayor was the lawsuit with the Ukiah Valley Sanitation District, which was filed in 2013. The city of Ukiah and the district will go to court sometime this year, and Brown said he is looking forward to seeing the litigation “taken care of.” The two other items in Brown’s docket are the Palace Hotel, which will be the topic of a receivership hearing on January 9, and Costco, which many residents have been anticipating for years.

In addition to those three items and fixing the city streets, “Let’s just hope for a nice smooth year,” Brown wrapped up. Then he laughed. “We can talk more later,” he said.