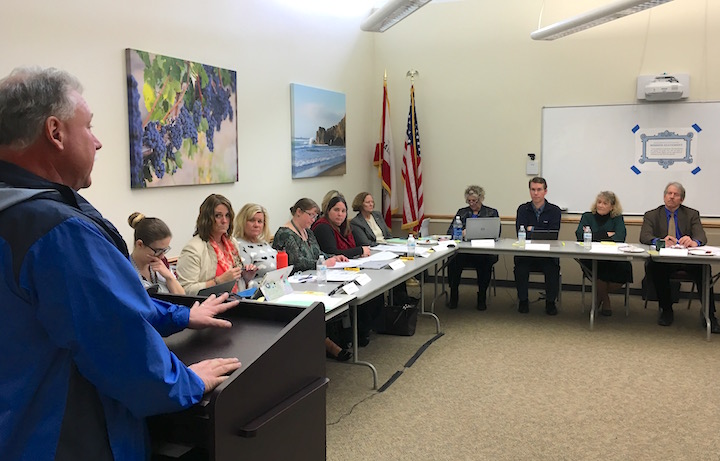 Allman presents to supervisors, BHAB members, and HHSA staff at a Jan. 23 joint meeting in Ukiah.

MENDOCINO Co., 1/26/17 — At some point in the coming year the Mendocino County Sheriff’s Office plans to stop responding to “crisis calls” unless there is a threat of violence, Sheriff Tom Allman said Monday, although he would not specify a date. Allman presented this “challenge,” as he called it, to Mendocino County supervisors in a measured presentation at a special joint meeting of the supervisors and the Behavioral Health Advisory Board held January 23, also attended by Health and Human Services Agency directors and mental health staff.

For the past several years a debate has raged in Mendocino County over how to better respond to people suffering a mental health crisis, who can be deemed “a danger to themselves or others” and can be placed on a “5150.”[footnote]So called for the California penal code that allows people to be detained if they are deemed a danger to themselves or others.[/footnote]Central to the debate is the fact that the county has had no emergency facility for mental health patients since the closing of the Psychiatric Health Facility in 1999. An increase in the number of crisis cases — who wound up being taken to the jail or hospital — caused alarm during the tenure of the previous mental health provider Ortner Management Group; and both law enforcement and local medical staff expressed frustration with the strain on their resources.

“I had a person say, ‘Is there one agency in the nation that has made this decision?’ I want to tell you, that doesn’t even play into my thought process, because Mendocino County has to be seen as a leader,” he noted in his presentation, thanking three out of four supervisors for supporting Measure AG.[footnote]Measure AG was a proposed sales tax increased placed on the Nov. 2016 ballot, that would have funded a mental health facility. It lost.[/footnote]

Although he credited substantial improvements in crisis response to Redwood Quality staff and mobile preventative outreach, Allman said that MCSO deputies and law enforcement still find themselves as the default responders after 5pm. “We, as Mendocino County, have to get to a point where the appropriate responding unit is the agency that’s responding to a mental health crisis…the Sheriff’s Office cannot continue to be the answer to all problems, whether it’s a tree across the road or someone having a mental health crisis,” he said.

Patients must be evaluated by a qualified medical personnel or law enforcement officer to receive a “5150” assessment, after which they can then be legally held up to 72 hours, if they are considered a danger to themselves or others. Since Mendocino County does not have a crisis facility, they are often transported to the jail or a hospital, and once assessed to facilities out of county.

Allman suggested that mental health staff could be trained as first responders, and coordinate with medical staff and ambulances around the county, adding “it’s not fair to say every mental health crisis is dangerous.” He said that 911 dispatchers could be instructed to ask a series of questions to assess the level of violence, and then could direct the call to mental health crisis services instead of law enforcement, giving the example of someone contemplating suicide at 2am. Emphasizing that if law enforcement was requested officers would still respond, he invited BHAB members to sit in during a shift at the dispatch office to witness calls come in.

Redwood Quality Director Camille Schraeder also spoke during Allman’s presentation to clarify that RQMC crisis response staff are available after 5pm, and that they have responded on “multiple occasions” and “will continue to do so.”  Between October and December 2016, Schraeder said, RQMC recorded that 115 crisis center referrals (26% of the total) had come from law enforcement agencies — including local police departments —[footnote]In contrast, 9% came from medical services, 13% from “community and county partners” and 52% from patients themselves[/footnote] Schraeder said her staff needed to assess “how many of those calls were a gun, an overdose, a jump off the bridge,” to determine percentage of cases should be considered a public safety issue and the impacts of Allman’s proposal.

Schraeder also suggested a joint study of the crisis cases handled by the Sheriff’s Office, and recommended the supervisors and BHAB be involved in looking at these numbers and case studies to help decide what crisis calls should be considered violent. BHAB members requested they be involved and proposed Allman set a timeline for a report. Allman resisted, saying that setting a deadline would hinder his ability to conduct his own study, and asked them to “trust us on this one, we’re on track…we’ll bring back the numbers.”

According to outside consultants, a large part of the response crisis problem, both in tackling the data and eventually in handling the problem, is that no memorandums of understanding(MOU) exist between law enforcement, medical services, and crisis mental health providers[footnote]A memorandum of understanding, or MOU, is simply an official document that exists to coordinate and codify cooperation between government agencies. They are not laws, but do create a lot of administrative policy in local government.[/footnote]to tackle this particularly multi-party and complex issue. The consultant, Lee Kemper, had urged that MOUs be in place between law enforcement, medical staff, and Redwood Quality prior to their taking over adult care services in July 2016.

However, Allman insisted that past MOUs, with previous agency directors and Ortner, had left law enforcement feeling that other agencies do not hold up their end of the bargain, and likened their willingness to sign an MOU to a hot stove, once touched. He said he would consider an MOU that allows law enforcement to “kind of step away from” certain situations but it would likely be a three to four month process.

Noting Measure AG’s failure, Allman also said the supervisors could place the measure on this year’s ballot to address the county’s crisis needs, but said “I’m not going to collect signatures again, I have a sheriff’s office to run.”

The meeting also covered a range of mental health services issues including adequate staffing, housing funds, treatment of patients held in the jail, the Stepping Up program, and the need for cultural competency training, which will be discussed in an upcoming Mendocino Voice article.