The CHP urges drivers to be cautious and courteous, as the National Weather Service is predicting rain all over the county today.

Keep an eye out for rock slides! There is one already, as of 7:09am, in the eastbound lane of 175, close to lake County.

UPDATE: A big rig is on its side and is blocking all lanes of the 271 at Piercy, under the 101. The truck lost its load of lumber. Smoke was visible. An ambulance was enroute, as of 8:53am.

UPDATE: As of 8am, CalTrans reported that the Navarro River crested at about 20′.

The Navarro River is pretty close to flooding, according to a graph from the USGS. 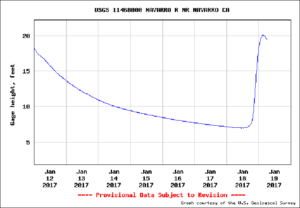 The Willits Police Department is geared up for flooding. Willits city residents can pick up free sandbags in the parking lot to the east of the police dept. Ignoring road closures is a ticketable offense, though as of 6:45am, no list of closed streets was available. The Mendo Voice will keep you updated!