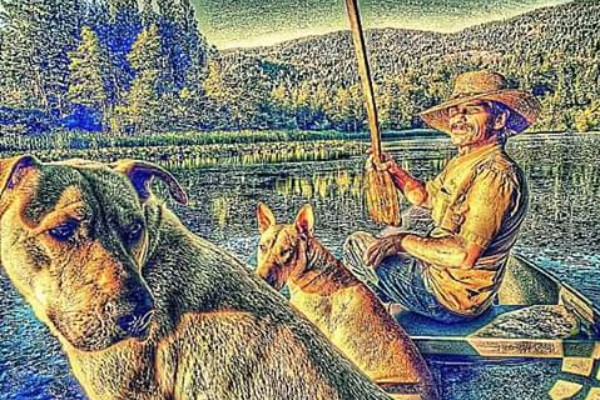 Hale, also from his Go Fund Me.

MENDOCINO Co., 1/9.17 — Pollard Hale, 57, of Covelo is in the hospital after a dog mauling left him badly injured, and in need of substantial reconstructive surgery. On Jan. 4 Hale went out for his evening walk in Covelo and was attacked by three pit bulls. Hale was airlifted to Santa Rosa Memorial Hospital, where he underwent reconstructive surgery on his face.

According to a Go Fund Me site set up by his son, he was also bitten on both arms. The damage to his left arm may be substantial enough that he will lose use of it. It seems that Hale was unconscious for sometime, but has recently woken up. The family is asking for donations to pay for the surgeries. According to the site, Hale and his wife are raising two of their grandchildren, and with the substantial injuries Hale is now unable to work.

The dogs belong to Miguel Escareno Pinon, 24, of Covelo. Escareno told police that he left the gate to his property open on that evening, and that the dogs escaped. The MCSO is investigating the incident and the dogs are being held in a 10 day quarantine. They say that Escareno has been cooperative, and are asking if anyone witnessed the attack or has additional information about the dogs. A legal process to determine whether the dogs are deemed dangerous and are to be euthanized is on going. 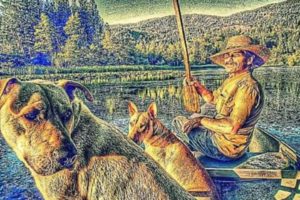 Hale, also from his Go Fund Me.

The following is the complete press release from the Mendocino County Sheriff’s Office.

Synopsis:  On 1/5/2017 around 10:20 AM the Mendocino County Sheriff’s Animal Control Division received a call from a female in Covelo who wanted to report a dog mauling.  The female reported that her husband, Pollard Hale, had been attacked by three adult Pit Bull Terrier dogs as he went on his evening walk.  The caller reported the attack occurred the evening before, around 7:00 PM, on Wright Way.  Mrs. Hale advised her husband had sustained major injuries to his limbs and face and had to be flown, via air ambulance, to Santa Rosa Memorial Hospital for treatment.  Hale is currently in intensive care and it is expected he will have to go through extensive rehabilitation in his recovery.

The Mendocino County Sheriff’s Animal Control Division has opened an investigation and has learned the owner of the animals, Escareno Pinon, also lives on Wright Way in Covelo.  Escareno Pinon has been cooperative in the investigation and the three dogs have been secured by Animal Control for a 10 day bite quarantine.  The owner advised investigating Officers that he had left the yard gate open when he left his residence and the dogs got out.  When he returned he saw the three dogs around the victim who was lying injured on the ground.  He secured the dogs while medical personnel were called to assist the victim.  The Sheriff’s Animal Control Division has one previous contact with the owner of the dogs regarding a previous dog bite, but it did not involve the same animals.
The investigation is on going and the case will involve a legal process to determine whether or not the animals will be returned to the owner or if they will be deemed dangerous animals and euthanized.

The Sheriff’s Office is requesting anyone who may have witnessed the dog attack or has previous knowledge about these animals to contact the Animal Control Division at (707)463-4086.