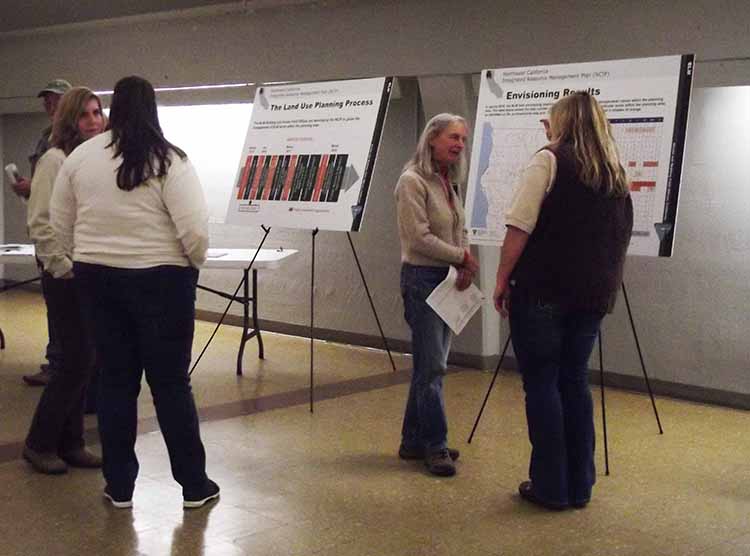 Members of the public talk with BLM staff

WILLITS 1/18/2017 — The Bureau of Land Management (BLM) held an open house at the Willits community center on Tuesday night, to answer questions and gather comment about a new plan for the 400,000 acres of land it manages in northwest California. The BLM is a federal agency within the U.S Department of the Interior that manages about one-eighth of the landmass of the United States. An estimate of 124,000 acres in Mendocino county includes areas in Cache Creek and Cow Mountain. But a map of the county is dotted with tiny isolated parcels owned and managed by the BLM, including about 1,200 acres in Little Darby, a park just east of Willits on Berry Canyon Road.

Every 20 years, the BLM is required to update its management plan for the lands under its administration. Part of this process includes seeking comment from the public about what people want for — and from — their wilderness areas. The public can offer input on the plan until February 3. A draft is expected to be published by the end of 2017, followed by a 100-day public comment period. The proposed final plan will be followed by another public comment period, and is scheduled to head for the governor’s office by the end of 2018. 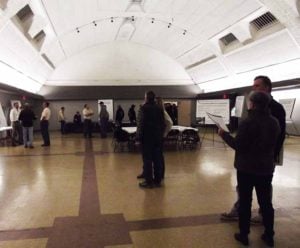 Members of the public at the BLM open house.

The crowd of around 40 people at the Willits community center included David and Ellen Drell, of the Willits Environmental Center, several volunteers and board members of the Eel River Recovery Project, and about half a dozen guys from the Mendocino 4×4 Club. Stations were set up with large maps next to tables spread with reading matter on specific wilderness values, which ranged from wildlife to cultural and paleontological resources on public lands. Each map was labelled with a different wilderness value, and attended by experts ready to discuss the subjects. A large table in the middle of the room held stacks of blank comment sheets, handouts with questions for people to answer in their comments, and little piles of hard candies.

Leiskyka Parrott, an interpretive specialist whose work at BLM includes public outreach and education, said the most common desire for public lands is access. Much of the public land is surrounded by private property, and is nearly inaccessible. But there are modern concerns, as well. “We don’t have any policy on drones,” Parrott said. The agency also hasn’t sorted out a policy on wildlife cameras. “We need help,” she concluded.

The desire for access is common to wilderness enthusiasts of all kinds, including the Mendocino 4×4 club, a “mild to wild” group that enjoys driving on trails of all levels of intensity. Allen Schrage, the president of the club, said that four-wheeling enthusiasts are known to travel up to five hours to enjoy their hobby. He believes that Mendocino County is “Missing out on a great economic opportunity” by not having more lands that are open to off-road recreation. Jesse Hodge, a member of the club, said club members had done clean-ups on several remote roads, including Sherwood Road and Tomki Road. Some cleanups, he said, involved removing two abandoned vehicles. Club member Manny Jimenez added, “There are a lot of us, just as there are lots of animals.” 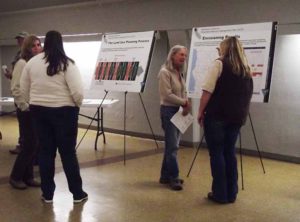 Members of the public talk with BLM staff

As Parrot predicted, the recreation and trails station was heavily attended. Justin Robbins, an outdoor recreation planner with the Arcata-Redding BLM field office, echoed Parrot’s remarks about access when he pointed out that people are less likely to use the wilderness “If my truck can’t make it up that road, or the really fun part of the trail starts two miles in.” Referring to the Little Darby trail, he said, “I don’t think tourists are getting off the 101 to go the Little Darby trail. Is that trail meeting the needs of the Willits community?” If community input includes requests to expand the 1.5 mile trail, the management plan would have to include a trail-building schedule that would not interfere with the mating season of a pair of spotted owls that recently made their home in the area.