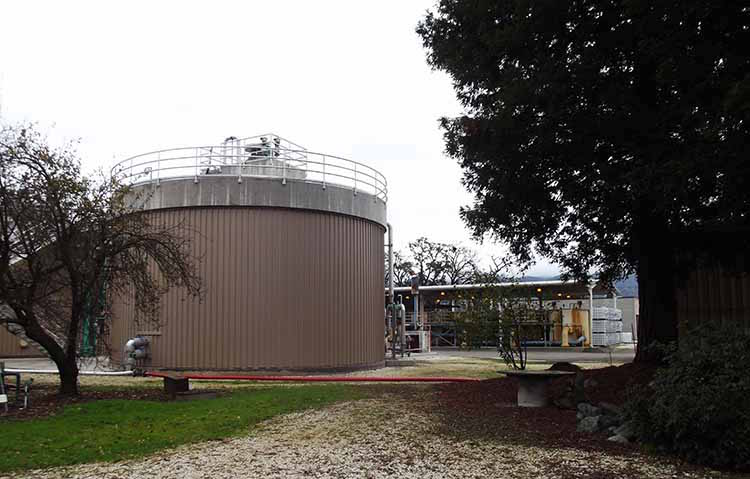 UKIAH 12/28/2016 — The Ukiah Valley Sanitation District and the City of Ukiah will appear before a Sonoma County judge tomorrow, Thursday Dec. 29, to set a date for the trial that will hopefully settle the long-standing dispute between the two entities. Careful watchers of Mendocino politics might recognize an echo of a previous dispute over sewage, between the City of Willits and the Brooktrails Community Services District, which also had to be resolved in a Sonoma County courthouse. On December 27, the district board met in closed session at the end of a special meeting for a conference with legal counsel on the litigation. Also on this agenda was a discussion of a budget resolution, which was rescheduled after a raucous meeting in November, during which ratepayers in the district expressed their displeasure with the district’s lawsuit against the City of Ukiah.

In its suit, filed in 2013, the district seeks damages that add up to around $30 million, plus prejudgement interest, citing agreements going back to 1955. If the city loses the trial, it will have to pay the claims out of the city wastewater fund, which, until earlier this month, was also being used as security for a recycled water project. Under a new plan proposed by City of Ukiah Director of Water and Sewer Sean White on December 7, that project could be salvaged. But the litigation could still cost the city millions in opportunities to refinance debt and borrow money on favorable terms for future projects.

The lawsuit alleges that the City of Ukiah was overcharging the district for services and had charged the district disproportionately for rebuilding and increasing the capacity of the wastewater treatment plant. The city handles billing and collection for the district, as well as maintenance and repair of the shared sewage system and the city-owned wastewater treatment plant. According to a recent report by City of Ukiah Finance Director Daniel Buffalo, as of October 31, the city and the district had so far spent a combined total of $3,300,276 on litigation. The city had spent $499,818. The district had spent $2,800,458 on the lawsuit, $2,525,047 of it going to the law office of Duncan James. The search for a mediator both parties find acceptable has stalled, so on Thursday, December 29, the case will come before Judge Michael Byrne of the Superior Court of California in Sonoma County. This will be a case management conference, which means the trial date will be set at that time.

Until recently, the greatest potential downside of the ongoing litigation appeared to be that Ukiah would lose an opportunity to use state funds to build a “purple pipe,” or recycled water system. This system, according to a city report, would alleviate the need to divert water from the Russian River and its tributaries; would save potable water by using recycled sewer water for agricultural and municipal purposes; and would end the practice of discharging effluent into the river, which puts the city at risk of violating ever-more stringent environmental laws. City staff also believe the project would circumvent the need for a $30 million upgrade to the wastewater treatment plant.

The city’s wastewater fund, which is still at risk in the dispute with the district,  was also being used as the pledge for a loan of $25,564,000 with a 1 percent interest rate in California State water bond funds. For this reason, the State Water Resources Control Board, the lender, was reluctant to allocate the funds that have been awarded to the city to build the recycled water system. There was no hard and fast date for the city and the district to resolve their differences and be sure the money was forthcoming, but many people close to the project, including Tim Eriksen, the public works director and and city engineer for the City of Ukiah, worried that other municipalities with an attractive project and no costly legal liabilities could easily snap up the money he had been counting on.

Now, even though the outcome of the trial is uncertain, the recycled water project may proceed in spite of litigation. The city has decided not to use the wastewater fund as security for the loan.

At the December 7 Ukiah City Council meeting, City of Ukiah Director of Water and Sewer Sean White proposed using the city’s water enterprise fund as security, instead of the wastewater fund. He assured the council that, according to preliminary legal and financial assessments, this approach was sound, though it could have some consequences. These include postponing capital improvement projects and possibly increasing the water rate. An automated meter reader is on the list of projects to be postponed. Two new wells could also be delayed, though Eriksen said the city’s water supply is robust enough that these are not a high priority at the moment. The council voted unanimously to approve using the water enterprise revenues as an alternative to the wastewater fund as security for the loan.

However, according to Finance Director Buffalo’s report, which he gave at the same meeting, the city still has opportunity costs as a result of the lawsuit. These include the inability to secure favorable financing terms for future projects, which he estimated could cost the city between $19.1 and $33.3 million. He believes the city could also lose $8.1 million by not being able to refinance the $75 million in bonds issued by the Association of Bay Area Governments in 2006 to build the new wastewater treatment plant. The city could also lose $16 million in grant funding, which adds up to $43.2 to $57.4 million, not counting litigation costs.

In the same report, Buffalo also suggested possible Brown Act violations on the part of the district. State law, he said, requires the district to report expenses in the minutes of their meeting agendas, though he was not able to find all the information about the district’s legal expenses in these documents. During the public comment period on the agendized budget item at the November 17 district board meeting, Chair Jim Ronco refused to discuss the lawsuit expenses, on the grounds that subjects under litigation are not discussed in public.

In a conversation after the city council meeting, Doug Losak, an attorney with Duncan James’ law firm, said “The district hasn’t done anything illegal,” and that he was not sure what Buffalo meant by violations of the Brown Act. He said he didn’t know if the amount paid in attorney’s fees was correct, but that James’ office had provided that information to the City of Ukiah upon one of the city’s requests for documents. Both the city and the district have claimed that the other side has relied heavily on public records acts requests, and been slow in providing information. District Manager Frank McMichael has been on extended sick leave, which also makes it difficult to get information.