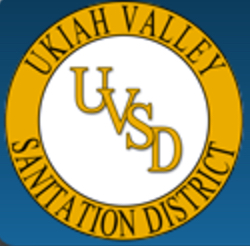 UKIAH — The monthly meeting of the Ukiah Valley Sanitation District board, held on November 17, was ostensibly concerned with workshopping a budget and considering connections for a planned winery. But the meeting, attended by about 40 members of the public, was instead dominated by acrimony and expressions of outrage over a lawsuit that could prevent the City of Ukiah from receiving $37,650,191 in state grants and low-interest loans for a project that would use recycled water for frost protection and watering the golf course and lawns at the cemetery and public schools.

The outrage over the ongoing lawsuit, originally filed in 2013, grew so heated that Chairman Jim Ronco called for a recess twice, admonishing the crowd to “control itself.” The budget workshop was deferred to the next meeting, a joint session of the sanitation district board and the Ukiah City Council. District Manager Frank McMichael suggested December 1-9 as possible dates.

The details of this are both complicated and their subject matter is somewhat unglamorous, but the outcome affects basic services, the local environment, and the city budget, so it bears close examination. Although portions of the sanitation district are within Ukiah city limits, this was not the case in 1955, when the sanitation district was established as a special district to provide sewer services outside of city limits. Gradually, the city began to annex unincorporated county land, and the two entities became ever more entangled.

In 2011 the sanitation district management decided that it could not pay off a multimillion dollar project to upgrade and increase the capacity of the wastewater treatment plant, which was completed in 2009, with the one-time fee paid for a sewer hookup to a new house. The term of art for sewer hookups in the Ukiah area is Equivalent Sewer Service Units (ESSUs). [footnote]An ESSU is slightly different from a connection, in that it is 250 gallons per day, or what is considered equivalent to the amount of waste discharged by a single-family residence. Therefore, one connection that discharges 500 gallons per day would be two ESSUs. The confusion is enhanced by the fact that measuring discharge by ESSUs only came into use in 1985, so earlier documents refer to connections.[/footnote]

The finances of the two entities are as entwined as their sewer pipes, a long standing situation which has broken down into acrimony and mistrust. The sanitation district’s board believes the plant is close to capacity, and doubts Ukiah Director of Water and Sewer Sean White’s calculation that it could handle about 900 more ESSUs.

The sanitation district contends that the figures used by the city are wrong and that therefore, the amount it paid for the plant capacity project was based on inaccurate calculations. In a September 20, 2016 letter to the Ukiah City Council, the sanitation district board stated that “the underlying basis for the Project[sic] cost allocation was false and does not reflect reality.” The amount of increased capacity anticipated at the improved wastewater treatment plant was allotted as 65% of new ESSUs for the district and 35% for the city, meaning that the district wound up paying more. Members of the board are now fuming and making accusations of the plant’s budget being used as a slush fund for the city’s “ever-growing institutional overhead.” This would not be without precedent, as the City of Willits and the Brooktrails Special Services District, engaged in a protracted legal fight over budgeting for their shared plant, with similar accusations levied then.

In 2013, the sanitation district sued the city, demanding it turn over millions of dollars that belonged to the sanitation district but was in a joint city-managed account. According to Ukiah Director of Public Works and City Engineer Tim Eriksen, the city turned over $4.5 million. Close to $3 million of that has been spent on legal fees, the majority of it to the Ukiah-based law office of attorney Duncan James.

At Thursday night’s meeting, people came to the podium to demand that the board divulge where it got the money for the lawsuit. During the public comment period on the budget, one woman asked the board, four of whom sat with their backs to the public, if there was a line item for the lawsuit. When Chair Jim Ronco told her that litigation was not the topic, she retorted, “how can you possibly have a budget and you don’t address a large object like attorney’s fees?”

Ronco replied that litigation matters are not public, and responded to the outcry that ensued by announcing “a five minute recess until the crowd can control itself.”

While ratepayers continued to express their frustration that sanitation district money is being spent on legal fees, Eriksen worried that the fighting might cause the state to give some other city the money that is ever-more-tentatively scheduled to be granted and loaned to Ukiah. “I’m sure they have several suitors at this time,” he said. There is not a hard and fast deadline for Ukiah to clear up the lawsuit and be certain of receiving the funds, but he added, “I would say if the deadline is a gray thing, we’re in that gray thing.” City staff is currently “grinding through every possibility” to find other funds to back the loan, if the lawsuit is not cleared up soon.

Meanwhile, the woman from the sanitation district board meeting continued having her say. During the uproarious recess called by Ronco after she insisted that the lawsuit was part of the budget, she raised her voice above the crowd and said, “you guys are just playing chicken.”