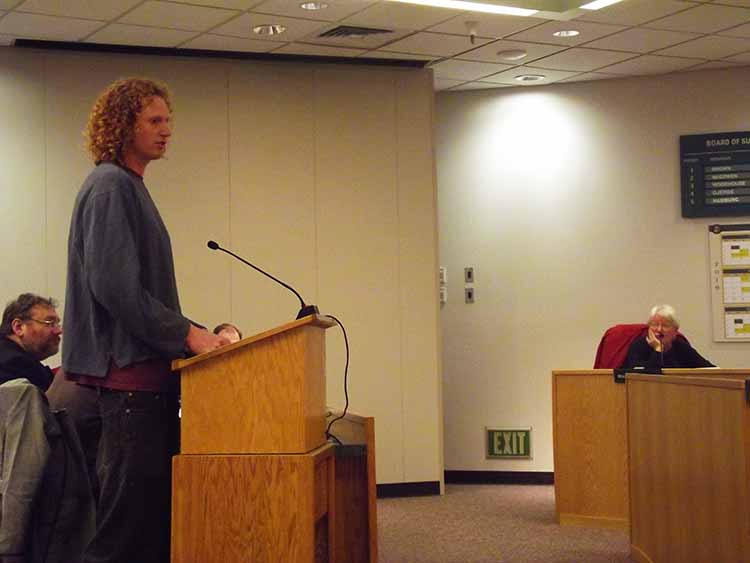 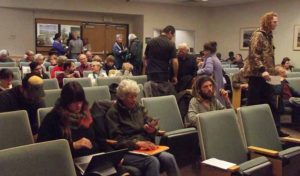 The board of supervisors chambers fill up for the hearing.

UKIAH, 12/16/2016 — The Mendocino County Planning Commission met December 15 for the second hearing on the initial study and environmental checklist for the county’s proposed cannabis cultivation ordinance, which would amend the inland zoning ordinance and add a chapter to the agricultural code. The study determined that the proposed ordinance calls for a mitigated negative declaration, which means that, as long as various measures are in place to protect the environment, the impacts of cannabis cultivation under the ordinance should be insignificant. County officials hope to avoid a full environmental impact review (EIR), which is generally far more expensive and time-consuming than the mitigated negative declaration. The first hearing was held on December 1.

More than 70 people attended the hearing last Thursday, and most of them had something to say. Homeowners in Ukiah’s residential neighborhoods objected to crime and odor they associate with pot growing, while growers insisted that they who attend five-hourlong meetings at the county seat are not the ones degrading other people’s quality of life. A contingent of environmentalists also requested that the environmental mitigations include requirements for future ordinances to protect unique habitat. 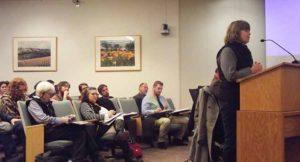 Candy Dickenson of Ukiah tells about being frightened by a grower’s dogs in her residential neighborhood.

Jerilynn Harris, a resident of Ukiah, limped up to the podium with a crutch under one arm and a notebook in her other hand. She began her comments by saying, “If this keeps going on long enough, I may be able to come up here without a crutch.” Harris opposes indoor as well as outdoor grows in residential areas.

The length of time involved in reviewing the proposed ordinance was a matter of serious concern for many growers, who worry that they will not have licenses by the time the new planting season begins. Joshua Keats, a grower from Laytonville, said “Provisional licenses will be 100% necessary” for growers who are impatient to be compliant with rules that are not yet in place.

James Smalley, another grower from Laytonville, said he, too, was willing to pay taxes and abide by environmental mitigation measures, but worries about being priced out of the business by prohibitive taxes. “Please do not shut down Laytonville,” he asked the commissioners. “You don’t hear anyone from Laytonville speaking out against pot.”

Commissioner Jim Little, a former chief of the Laytonville Fire Department and former president of the Forest Landowners of California, questioned Deputy County Counsel Matt Kiedrowski, saying, “What happens if this [proposed ordinance] is implemented and some judge says…you  need an EIR? These people don’t know where they stand, legally.” Kiedrowski replied that he is looking into the possibility of an affidavit that would not be tied to the proposed ordinance, in case the mitigations fail to protect it from lawsuits.

Little also compared the current process of regulating cannabis cultivation to the process of regulating forest lands, which, he said, “took the small land owner out of business…I can see in a few years, cultivators pushing for an initiative to become illegal again.” He added that “I’ve been through a lot of rule making processes and this is the most complicated.”

Some people in attendance were at the hearing to request further rule-making. More than half a dozen members of the public specifically requested that mitigations include a clause that requires the county to craft an ordinance to protect the oak woodlands. Some also called for a future ordinance on grading, to protect streams in sensitive ecosystems. Kate Marianchild, author of the much-beloved nature book “Secrets of the Oak Woodlands: Plants and Animals Among California’s Oaks,” spoke of how her travels have led her to conclude that “Mendocino County  may have the greatest expanse of pristine woodlands of anyplace in the state. Most of those are zoned rangeland.” One of the most hotly-contested proposed mitigations is forbidding new pot grows on rangeland. Several growers have contended the zone is perfect for growing pot, while many environmentalists, including Marianchild and David and Ellen Drell of the Willits Environmental Center, fervently support preventing cultivation there.

Another topic that came under discussion was that of lighting, and its usefulness — or lack thereof — as a security measure. Commissioner Madelin Holtkamp declared herself “a fan of the dark sky,” adding that “even raccoons are entitled to a dark night.” Worker safety, site plans for future homes on cultivated areas, and the legality of raising fees to pay for the enforcement of regulation are all potent issues that continue to come up in the process of answering questions about what a regulated pot industry in Mendocino County will look like.

The public comment period on this matter closes January 4.