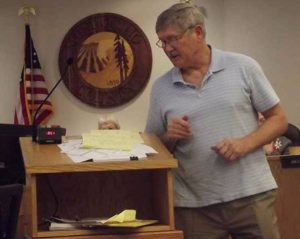 MENDOCINO Co., 12/6/2016 — The Mendocino County Planning Commission held a hearing last week, on December 1, to discuss the environmental analysis for the Mendocino County Medical Cannabis Cultivation Regulation. The nearly three-hour meeting consisted mostly of comments from a cross-section of Mendocino society, from small farmers vowing their commitment to environmental stewardship, to non-growing homeowners expressing outrage over crime and the odor of ripe marijuana.

The proposed ordinance would amend Mendocino County’s agricultural and zoning codes to regulate only medical (non-recreational) cannabis cultivation in accordance with the state medical cannabis rules. The proposed county ordinance, developed during a series of public hearings during the spring and summer of 2016, applies to all unincorporated county areas except a portion of the coastal zone regulated by the California Coastal Commission.[footnote]The coastal zone is an area running very roughly from about the first ridgeline down to the shore. Regulations in the coastal zone require input from the California Coastal Commission, a state body, which make can the process lengthy.[/footnote]

Over 80 people attended the three-hour long hearing on Thursday and many rose to speak. In a comment that recalled an incident from this summer — when a hunter’s association sued the county over the cannabis cultivation “urgency ordinance,” forcing a drastic shortening of the enrollment period — Chris Brennan, a local rancher and the former federal trapper, came to the podium and threatened to throw a “monkey wrench” that could impede the development of the law. Other commenters made specific requests about where cultivation should be permitted, and precautions that should be taken.

Also in attendance were Mendocino County Agricultural Commissioner Chuck Morse and Mendocino County Planning and Building Dept. Senior Planner Mary Lynn Hunt, both of whom aided with the draft regulations. The Planning Commission will consider the public’s comments and make a recommendation to the Mendocino County Board of Supervisors, which will then vote on whether the proposal should become law or undergo another round of environmental mitigation discussions. Any member of the public can make a claim against the county for not addressing an environmental mitigation.

Research-intensive analyses of complicated projects are often prepared by private firms. In this case, the board of supervisors contracted with Laco Associates, a consulting company that specializes in planning and inspection services, to prepare the 131-page project analysis. Laco determined that the project only needed a mitigated negative declaration.[footnote]This is basically a report explaining that a project is either harmless to the environment, or will be as long as certain environmental mitigation measures are in place.[/footnote] Some of the protective measures in the county’s proposal include not providing permits for new grows on areas zoned as rangeland; requiring a watershed assessment for new cultivation areas; and requiring that lights in indoor grows be completely contained.

The county’s two-part cultivation ordinance — an amendment to the agriculture code and an addition to the zoning code — represents Mendocino County’s first steps in creating a set of local licenses. This is a necessary part of the process under California’s Medical Cannabis Regulation and Safety Act (MCRSA), passed in 2015, which requires local licenses to secure a state license. Passage of some kind of local ordinance will enable Mendocino medical cannabis growers to apply for state MCRSA licenses, which are scheduled to be fully implemented by January 1, 2018.

First up to the podium was Brennan, the Laytonville rancher, and trapper of some local repute, who began by describing just how difficult and expensive it would be to perform a full environmental impact report (EIR) for the proposed ordinance. “We can easily throw a monkey wrench in this and make you do a full EIR,” he informed the commission, after saying that non-growers like himself would need a number of concessions from the growers before they would accept the proposed mitigations. “But I don’t want to go there,” he went on. “It costs too much money, and that would be a real pain for Chuck.” Here he referred to county ag commissioner Chuck Morse who spent much of the year crafting the ordinance. Among the concessions Brennan called for was a requirement that all new large grows only be situated on flat, irrigated farmland, “That’s where they belong.”

Stuart Bewley, also a Laytonville farmer, disagreed with Brennan’s analysis of pot grows on rangelands, saying that they are perfect for cannabis cultivation because the land is often grassy with clay soil, which holds water for a long time. Also, “You don’t have to cut down a bunch of trees,” he pointed out. He also recommended building pit ponds. These, he told the commissioners, would hold four to five acre-feet of water, which would spare local watersheds a great deal of the environmental destruction that is often attributed to marijuana cultivation.

Bewley said growers could build a pit pond for $20,000. But other members of the public spoke up to address other costs they characterized as “onerous.” Paul Hansberry, a farmer who has spoken about this topic at public meetings in Sacramento, predicted that, “If you make the regulations too onerous, the regulations won’t be adopted.” Other growers came to the podium to say they had spent between $20,000 and $50,000 on the various permits and inspections necessary to bring their farms into compliance with local rules this year.  In her closing remarks, Planning Commission Chair Molly Warner requested that county staff provide an estimate of the cost to growers, but the information was not forthcoming at the time.

Several residents of Ukiah neighborhoods spoke about how they felt driven indoors by the powerful odor of the crop and purported criminal element they associate with cultivation activity. “We had felons next door,” said Ukiah resident Barbara McLean. “It was horrible.”

“How could anybody listen to that woman’s story and not be moved?” asked Will Porter, of Emerald Grown, an independent cannabis growers co-op. In a conversation after the meeting, he said that “the idea of trying to cultivate in an antagonistic environment is horrifying,” and that “nobody on our side” supports growing pot in crowded urban neighborhoods.

Several speakers reminded the crowd about broader impacts of cannabis cultivation that are often overlooked. Priscilla Hunter, of the Coyote Band of Pomo Indians, spoke to the commissioners about the need to protect cultural sites and to encourage cultivators of all kinds to return Native American artifacts to the appropriate indigenous people.

Dennis Slota, an amateur astronomer in Ukiah, suggested an a lighting ordinance based on the International Dark Sky Model Lighting Ordinance, saying that human are losing the ability to view “the largest international park, which is the night sky.” He also asked the commissioners to consider a provision against the use of guard dogs, which he characterized as inhumane.

Before adjourning Wednesday’s meeting, Chair Molly Warner went over the items she plans to revisit at the next Planning Commission meeting on December 15. She said she found “compelling arguments both ways” about the range land issue. Guard dogs, the watershed assessment, and a suggestion to prohibit hauling water to grow sites were also on the lengthy list of issues she touched upon in her brief meeting recap.

The commissioners, Warner said, will try to make a final recommendation to the Mendocino County Board of Supervisors in late January. The proposal may become law by February of next year. Vice Chair Madelin Holtkamp said she thought it would be a good idea to suggest that the Mendocino County board of supervisors craft a plan for the county to pay for the program. Warner also requested an estimate of how much growers would have to pay for the ever-increasing number of permits and fees. “It does seem like it’s going to be expensive,” she observed.

At this point, the planning commission, which has seven members, is taking public comment. The Mendocino County Dept. of Planning and Building Services is required to consider each issue that was commented upon. If the board of supervisors and the planning commission agree that the mitigated negative declaration is inadequate, they can direct county staff to conduct a full EIR.

It is not too late for members of the public to comment on the process, either in writing or orally, at the December 15 meeting, which will take place in Ukiah at 10am, the public comment period will end on Jan. 5, 2017. Warner expressed a preference for written comments, which can be sent to 860 Bush Street in Ukiah or 120 West Fir Street, in Fort Bragg. Comments will also be accepted by email, phone, or in person at a meeting. The phone number for the Ukiah office is (707) 234-6650. The phone number for the Fort Bragg office is (707) 964-5379. Readers can check out the Mendo Voice’s list of this month’s Mendocino County government meetings here.