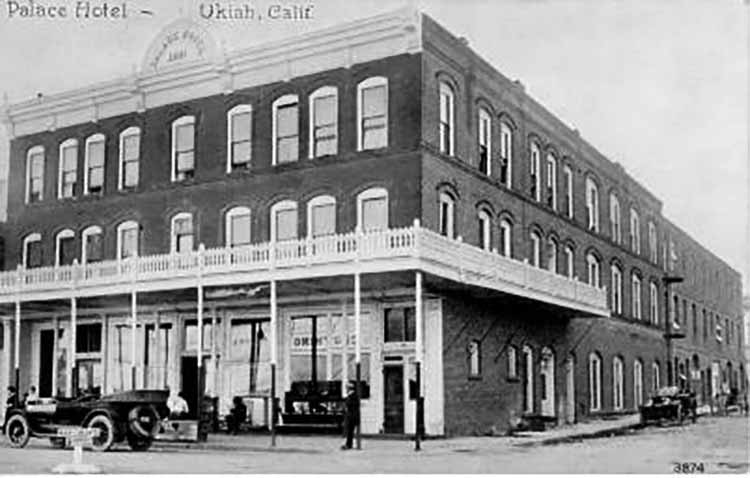 The Palace Hotel, circa 1915. Photo courtesy of the Ukiah Main Street Program website.

The Palace Hotel in downtown Ukiah has been shuttered since 1989. The city finds the building unsafe, and is unsatisfied with the owner’s progress in repairing it. Now a hearing is set to determine if a receiver will take responsibility for the landmark hotel. A press release from the city of Ukiah, which was signed by Ukiah City Manager Sage Sangiacomo, is below.

Settlement discussions between the City of Ukiah and the owner of the Palace Hotel have come to an end without the parties reaching agreement. Therefore, a hearing on the City’s petition to appoint a receiver to oversee the rehabilitation of the historic hotel has been set for January 9, 2017. (A previous press release indicated that the hearing would be held on January 3, 2017.) Following that, a trial has been set for three days, starting on June 5, 2017.

The case will be heard by out-of-county judge Leslie C. Nichols. Judge Nichols was appointed by the Judicial Council to hear the case after Eladia Laines, the owner of the hotel, filed a motion to require the case to be heard in a different county. In November of 2015, Judge Nichols ordered mediation between the parties rather than hearing argument at the first  hearing.

If a receiver is ultimately appointed, that person will have the power, subject to court supervision, to  take control of the hotel and hire engineers and contractors to design and perform repair work. He will also have the power to borrow funds, secured by the hotel property, to pay all costs of the  receivership.

This is the first receivership sought by the City for  a dilapidated property.

The Palace has been vacant and boarded up since it was purchased at a tax sale in 1989. Since that time, the City of Ukiah and members of the community have made numerous efforts to encourage the owner to  improve the building.

In May of 2011, the Ukiah Building Official conducted an inspection of the Palace Hotel, where numerous health hazards and violations were reported. Based on the results of that inspection, the City Council conducted a hearing to determine whether the building should be declared a public nuisance and a violation of building and other codes. The hearing was periodically continued for four years to allow Ms. Laines the opportunity to remedy the unsafe and dilapidated condition of the property. When she failed to make satisfactory progress, the City Council completed the public hearing process and administratively determined that the property is in an unsafe and dilapidated condition.

In July of 2015, the City of Ukiah announced that it would be filing a petition to appoint a receiver for the Hotel.