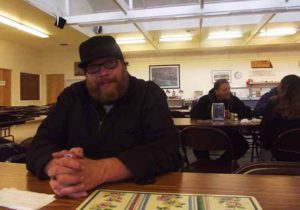 Robert Gray at Plowshares in Ukiah

UKIAH 12/14/2016 —  A Canadian weather system brought much-needed rain and even some photogenic snow to Mendocino County last week. But the winter is hard on the close to 1,200 people in the county who are homeless. The Mendocino Voice went to Plowshares, the soup kitchen in Ukiah, at lunchtime one day to ask a few homeless people how they are faring. Here is what three of them had to say.

“We need the water and we need the rain,” acknowledged Erin Blackwell, a homeless woman who appeared to be in her thirties eating lunch at Plowshares in Ukiah on December 7. But “it’s really hard in the rain,” she added. Asked how she manages, she said simply, “I don’t know.” She was glad to be wearing fresh clothes, but explained that once they get wet, “you just wear wet clothes until the sun comes out.” It was snowing in Willits that day, and rained in Ukiah that night. Blackwell said she had felt faint most of the day and that she thought “police should lighten up on where you can sit and stand.”

Robert Gray, who was born and raised in Ukiah, said he has been homeless “coming up on four years now.” His housing has never been stable, but “this is the first time it’s been like this.” Gray, who will be 49 later this month, said he’d been on “quite the journey” in the past few years, when he began to live on the streets “full, full-time.” Though he has mental health issues, he said, “from my point of view, a lot of it has to do with not just mental illness.” He prefers to keep to himself, saying, “I don’t do the WalMart crowd. I don’t do crowds, I don’t do loud.”

“I’m not shady or sideways,” Gray said, but “these streets are mean. People get shot, stabbed, beat up, killed, every day.” He said he also sees “a lot of thieving. People wait til you have nothing, and then steal that.” Though he did not specify, he remarked that “the police don’t make things any easier.” He mentioned a ubiquitous Ukiah Police Department flier that states, “Handouts are not helping.” Gray agreed, opining that, “it’s true. It’s like feeding the bears.” But he suggested “incorporating a little bit of the Marxian” concepts about helping the needy. Otherwise, “I don’t see things getting any better. I see people getting cold, freezing, sleeping on asphalt and concrete.” He predicted that “there will be loss of life in the homeless community, come February or March,” without sufficient shelter to accommodate them.

A less life-threatening issue, but one that is important to him, is hygiene. The personal hygiene supplies and fresh socks from Plowshares, he said,  are “awesome, especially if you’re on your feet all day.” While Gray, whose person, clothing, and pack were clean, is willing to “hit that river, even if it’s cold,” for a bath, he said he’d like to see designated places where homeless people can take a shower and do laundry, even if that means just a hand washer. “I’m lucky if I have fifty cents to use the dryer,” he said. Gray also said he’d like to see some “self-mentoring,” from “decent people within the homeless community,” who could provide tips about survival skills.

Another man with survival on his mind was David Simmons, who when asked how he was doing in the winter weather replied, “Not very well.” Simmons, who will be 52 shortly before Christmas, is dying of liver disease. He was animated and well-spoken, with a bruise in the middle of his forehead at the hairline. He said he “has children all over the place,” but that his family “is scared because they’re scared of the disease,” and won’t have anything to do with him. He has been homeless this time for three years. “It’s kill or be killed out here,” he said, adding that homeless people have “been in fights, stabbed, beaten.” “Fall asleep for five minutes, and see who you can trust,” he suggested.

Simmons, too, objected to the treatment homeless people receive from the police, saying, “They run us around like hogs all night.” He was also upset that the city of Ukiah opened up an ice rink, though the winter shelter, which has faced a number of delays, has not yet opened. “The town needs to step up and see that we’re citizens. They treat us like garbage,” he said. “You go to McDonald’s to warm up and people kick you out. You still get treated like crap, just because you have a pack.”

“How did this happen?” Simmons asked, spreading his hands to take in the plight of the homeless people around him. “Not all of it’s because of dope,” he said, answering his own question. “There are people out there every day, one check away from homelessness. Everybody. These people don’t deserve this. They have feelings, and emotions.” He reached for a napkin and wiped tears from his eyes as he declared himself ready to volunteer to help other homeless people, “Just as long as my people get off the fucking streets and get fed.”

You can read our previous coverage on the emergency winter homeless shelter in Ukiah.