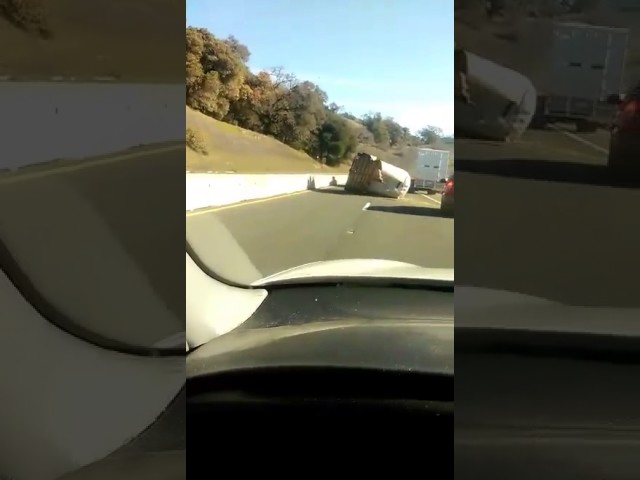 UPDATE 5:15pm: The CHP has released a statement on the incident, stating the driver, Jessi Preyer, was driving a 2002 Ford F250 when the horse trailer began to sway. Preyer then lost control of the vehicle which jackknifed causing the trailer to become unhitched and the vehicle to go off the steep embankment towards the west, where the vehicle came to rest. The trailer ended up in lane 1 of Highway 101 southbound. One horse suffered a large facial laceration but otherwise there were no other injuries.

4pm: Ukiah CHP Public Information Officer Adams told The Mendocino Voice that “a horse was injuried, they’ll be ok out of the crash. They had some facial laceration, they’ll have to get some vet work done, nothing super major.” Adams also reported the driver of the vehicle, a 17 year old, went off a 100 foot embankment but is without injuries, and the incident is being cleared up now. The CHP will be releasing a press release on the incident with more information shortly.

3pm: Several readers are reporting they have seen the horses uninjured on the side of the highway. We will update when we are able to confirm this information with the CHP or animal control.

2:12pm: A reader is reporting the horses were recently seen being examined on the side of the highway. No additional information seems to be available from scanner traffic or the CHP incident report. We’ll update as new information becomes available.

1:25pm: The second lane has been re-opened. Animal control stuck in traffic attempting to reach the vehicle and overturned trailer.

ORIGINAL POST: 12:30pm – There are current reports of a horse trailer accident on Highway 101 in the southbound lanes of the Willits grade, with one lane fully blocked and the second lane partially blocked. Traffic is being diverted to the second lane. (Warning: Video contains some non-family friendly language).

Scanner traffic indicates there may be a minor injury to a civilian, and officers are requesting extraction tools as the trailer includes two horses, as well as assistance from animal control or a vet. The incident reports seems to indicate that the vehicle associated with the trailer is about 50 feet down the embankment south of the Howard Forest Ranger station. The incident was initially reported at 12:29.

CHP officers, All in One Towing, Sheriff’s deputies, and medical personnel are responding.

We’ll update with more information as it becomes available. Video thanks to Daniel Palmer.