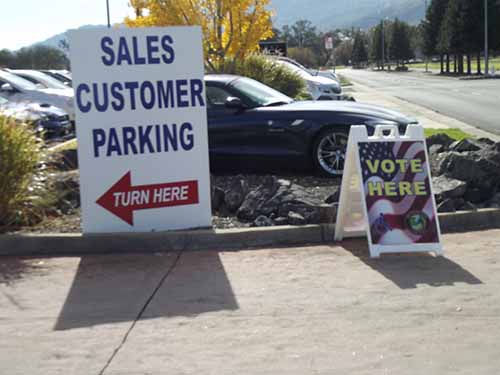 UKIAH — After a national campaign season that was rife with allegations of fraud and intimidation, poll workers reported high turnout but none of the bullying that was widely anticipated.

“I’ve never had any problem with intimidation,” said Katherine Cannon at the New Life Community Church. Cannon has been a poll worker for 16 years. Asked to talk about the trickiest problem she has faced, she laughed and said she was working at a polling place in a school one time when a voter drove up in a car with a bumper sticker bearing the name of a school board candidate. That was accidental electioneering, and she had to ask the voter to move the car.

Only Anna Webb, a ten-year polling place veteran, remembered an instance of deliberate and persistent electioneering that prompted her to call law enforcement, though she did not recall the measure. A little before noon on November 8, she said about 85 people had come to the Ukiah Assembly of God Church on Barnes Street to cast their ballots. As she chatted for a few minutes, two voters requested replacements for spoiled ballots, which Webb discarded, and another voter requested a provisional ballot.

At Saint Mary’s Parish Hall, poll monitors Jo-ann Rosen and Mary Waters, who had been trained by the Lawyer’s Committee for Civil Rights in San Francisco, had questions about the limited material available in Spanish. However, County Clerk-Recorder Susan Ranochak said that, according to criteria based on the 2010 census, Mendocino County is not required to print bilingual ballots. One copy of a sample ballot in English and Spanish was available at each polling place. Also available at each station was a touch screen voting booth equipped with headphones, to help visually impaired voters navigate the ballot.

Some voters were still uncertain as to whether they would even cast a ballot. At the polling place at Ken Fowler Motors, an auto dealership on the south end of town, salesman Shaun Johnson reported that it had been “crazy busy,” from the time he arrived at 8:30am. Asked if he had voted yet, though, he said, “I haven’t had a chance to look into it yet.”