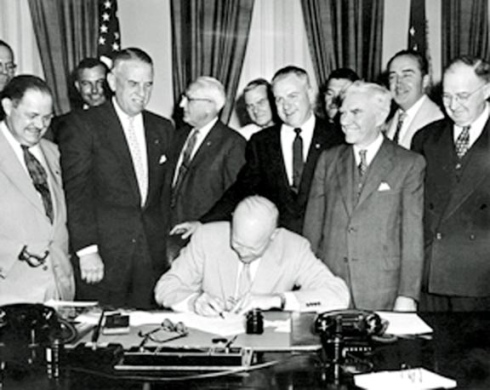 Eisenhower signing a proclamation declaring Veterans' Day. Nov. 11 was formerly Armistice Day, and remains so in much of the world, commemorating the end of hostilities in World War I. After World War II, President Eisenhower, who had commanded the Allied forces in Europe, changed the day to a day remembering all who had served in the armed forces, living and dead.

November 11, 1918, marked the end of fighting in the “war to end all wars,” WWI. On that day, at the eleventh hour of the eleventh day of the eleventh months, fighting in Europe ceased as an armistice was declared. Though the war would not be formally ended for several months, this date marked the end of bloodshed and became celebrated throughout the world. In France and Belgium it is still celebrated as Remembrance Day. Likewise in the Commonwealth Countries of the United Kingdom, Australia, and Canada, Nov. 11 is observed as Remembrance Day, with varying celebrations. 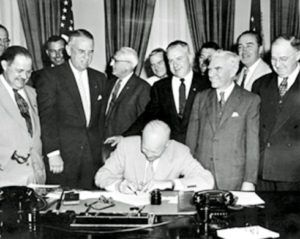 In the United States we commemorate those who have died in war on Memorial Day, which began as Decoration Day in the wake of the Civil War.

After WWI President Woodrow Wilson proclaimed Nov. 11 as Armistice Day, and we continued calling it that during the period between the world wars, and immediately after. But in the mid-1950s, after the Second World War and the Korean War, President Dwight Eisenhower rededicated Nov. 11 not only to those who had died, but to all who had served.

By the President of the United States of America
A Proclamation
Whereas it has long been our custom to commemorate November 11, the anniversary of the ending of World War I, by paying tribute to the heroes of that tragic struggle and by rededicating ourselves to the cause of peace; and

On that day let us solemnly remember the sacrifices of all those who fought so valiantly, on the seas, in the air, and on foreign shores, to preserve our heritage of freedom, and let us reconsecrate ourselves to the task of promoting an enduring peace so that their efforts shall not have been in vain.

Whereas in the intervening years the United States has been involved in two other great military conflicts, which have added millions of veterans living and dead to the honor rolls of this Nation; and

Whereas the Congress passed a concurrent resolution on June 4, 1926 (44 Stat. 1982), calling for the observance of November 11 with appropriate ceremonies, and later provided in an act approved May 13, 1938 (52 Stat. 351), that the eleventh of November should be a legal holiday and should be known as Armistice Day; and

Whereas, in order to expand the significance of that commemoration and in order that a grateful Nation might pay appropriate homage to the veterans of all its wars who have contributed so much to the preservation of this Nation, the Congress, by an act approved June 1, 1954 (68 Stat. 168), changed the name of the holiday to Veterans Day:

Now, Therefore, I, Dwight D. Eisenhower, President of the United States of America, do hereby call upon all of our citizens to observe Thursday, November 11, 1954, as Veterans Day. On that day let us solemnly remember the sacrifices of all those who fought so valiantly, on the seas, in the air, and on foreign shores, to preserve our heritage of freedom, and let us reconsecrate ourselves to the task of promoting an enduring peace so that their efforts shall not have been in vain. I also direct the appropriate officials of the Government to arrange for the display of the flag of the United States on all public buildings on Veterans Day.

In order to insure proper and widespread observance of this anniversary, all veterans, all veterans’ organizations, and the entire citizenry will wish to join hands in the common purpose. Toward this end, I am designating the Administrator of Veterans’ Affairs as Chairman of a Veterans Day National Committee, which shall include such other persons as the Chairman may select, and which will coordinate at the national level necessary planning for the observance. I am also requesting the heads of all departments and agencies of the Executive branch of the Government to assist the National Committee in every way possible.

In Witness Whereof, I have hereunto set my hand and caused the Seal of the United States of America to be affixed.

DONE at the City of Washington this eighth day of October in the year of our Lord nineteen hundred and fifty-four, and of the Independence of the United States of America the one hundred and seventy-ninth.

By the President:
JOHN FOSTER DULLES,
Secretary of State