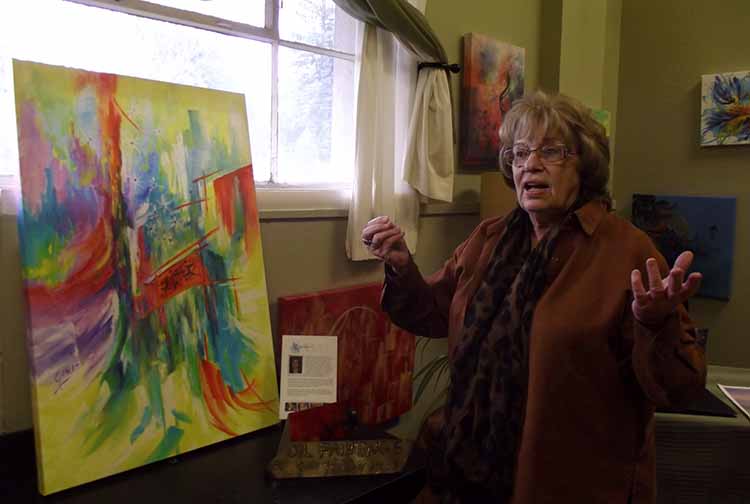 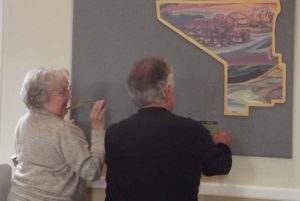 UKIAH, 11/30/2016 — The Mendocino Voice took a pre-tour of this Friday’s art walk, to check out who will be flying giant red flags outside of their establishments at the end of a long work week. We found individuals and organizations preparing for what promises to be a moveable feast for the eyes, if visitors are prepared to do some walking.

Corner Gallery at Church and State — that intersection of so much art patronage — is the hub of the First Friday art walk in Ukiah, from 5-8pm. But many art lovers never make it to the other venues, north to Alchemy Tea House, which is an experience of olfactory connoisseurship; west to the Community Foundation, where a mural with storyboards about the seven county regions will be on display; or northwest to Toppers Salon, where Gini Hoover’s paintings reflect her relationship with God. The art walk is a collage of inspirations, with each participant motivated by something different.

“You could log some serious steps without even knowing it,” said Ukiah City Council Member Maureen Mulheren. The art walk combines two of Mulheren’s pursuits: promoting downtown businesses, and encouraging people to walk. With twenty local businesses and galleries participating in the event this month, logging some steps sounds like a distinct possibility. Santa Claus will be at Mulheren’s office, Connect Insurance at 304 North State St., wearing a custom-made suit. “He starts growing his beard in October,” said Mulheren, sounding very much like she knows him personally. 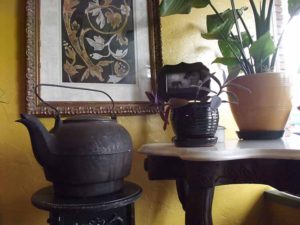 A teapot at Alchemy Tea House

Emily Held, of Mama’s Medicinals. Held’s 2000 square foot space is wide-open, containing a chessboard, a display of teapots, and a small stage with a piano. Held’s artist canceled with short notice, but she hosts an open mic that starts at 7:30pm and sometime lasts until midnight.

Several small businesses in the downtown shopping district feature one or more artists, such as Bona Marketplace at 116 West Standley Street, where owner Leslie Bartolomei said she likes to find a pair of artists whose work complements each other. On one side of the shop, tucked in between two racks of necklaces, one of Sue Sweet’s large textured paintings tells a bittersweet tale. “It Takes a Village” is a brightly-colored abstract painting of several adult women and a child, which is a reference to the way a group of friends came together to care for the daughter of a friend who was suffering from cancer. On the other side of the shop, Polly Palecek’s “Whelk Girl” depicts a woman’s face peering out of a large spiral shell. This one is inspired by “All the Light we Cannot See,” Anthony Doerr’s novel about a blind French girl’s coming of age during World War II. 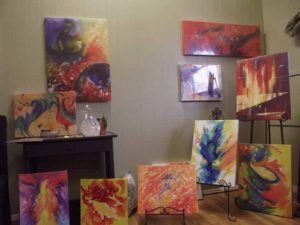 Gini Hoover, whose art will be featured at Toppers Salon at 301 N. School St., told her story about being inspired by divine instruction. She was having her hair done when a reporter from the Mendocino Voice popped in on Wednesday, but she gave a private tour of her studio, which is in the same building as Toppers. “I was one of those purists,” said the 82-year-old artist, who recalled that five years ago, while painting a double rainbow over the ocean, a voice informed her that it was time to start painting. “Well, what do you think I’ve been doing for fifty years?” she replied, thinking of her many realistic landscapes with their delicately rendered light. But ever since then, her work has been abstract and spiritual. Lisa Paccini, who owns the salon with her daughter Melissa Kirch, is a fervent admirer of Hoover’s work, delighting in the many interpretations that are possible with vivid abstract work.

At the Community Foundation of Mendocino County at 204 S. Oak St., board member Gayle Greene talked about “good public art that gets people talking.” She was referring to Lauren Sinott’s mural, inspired by the iconic, historical images of the seven regions of Mendocino County. Seabiscuit appears to gallop out of the painting’s center, while a little further north, the roundhouses of Covelo and Round Valley are a reference to Native American spiritual practices. Greene’s mother, Millie Sanchez, and her husband Michael were helping her assemble an array of storyboards that consist of details from the painting and photographs of contemporary events that have been supported by various non-profit efforts connected to the Community Foundation. 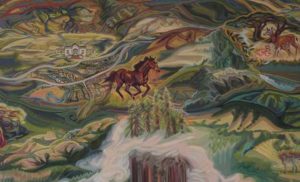 Detail of Lauren Sinott’s mural, which will be unveiled at the Community Foundation

Another highlight of this Friday’s art walk will be the re-introduction of Benjamin Cunningham’s mural, “Resources of the Soil,” which was at the old post office for many years. It has been cleaned and restored and will be on display at the City of Ukiah, 300 Seminary Avenue. An open house and craft fair at Grace Hudson Museum on 431 Main Street will be underway. The Local Ukelele Band will play live at the Corner Gallery. All venues participating in the art walk will fly a 13-foot maroon flag, courtesy of the Main Street Program.