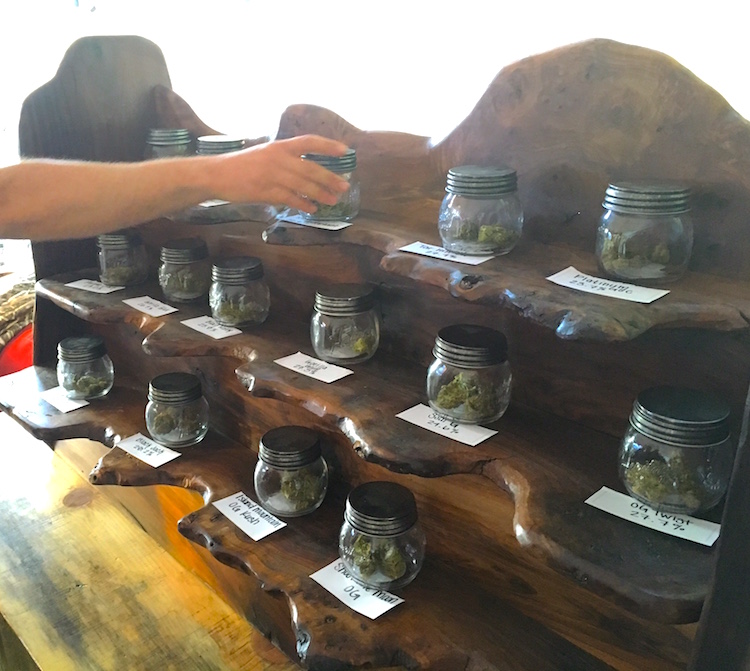 Visitors could check out the winners in the 215 area after the Golden Tarp awards event.

REDWAY — The road to the third annual Golden Tarp Awards winds through redwood forests, sunny hillsides, and past countless hitchhikers before ending at the Mateel Community Center in Redway. There, on October 1, around 800 guests filled the room to watch the best “light dep” cannabis farmers in the Emerald Triangle take the stage and receive their awards. The event featured an impressive slate of cannabis industry experts and regulators, rows of vendors and a variety of bands playing outside, but everyone crowded into the main hall for the awards ceremony.

This year’s winners were selected in four competitive categories for different strain types — floral, fuel, earth, and fruity — as well as one for the highest THC and CBD results, listed below. The winner by one vote was the Dookie Brothers’ Skittlez for the Golden Tarp Award itself (a heavy, handcrafted statue of a little man pulling a tarp).Testing results from Pure Analytics demonstrated that the 2016 group of samples was above average in potency, and entries were of higher quality and more varied than last year’s contest, which saw almost half the entries disqualified for mold or pesticide issues. 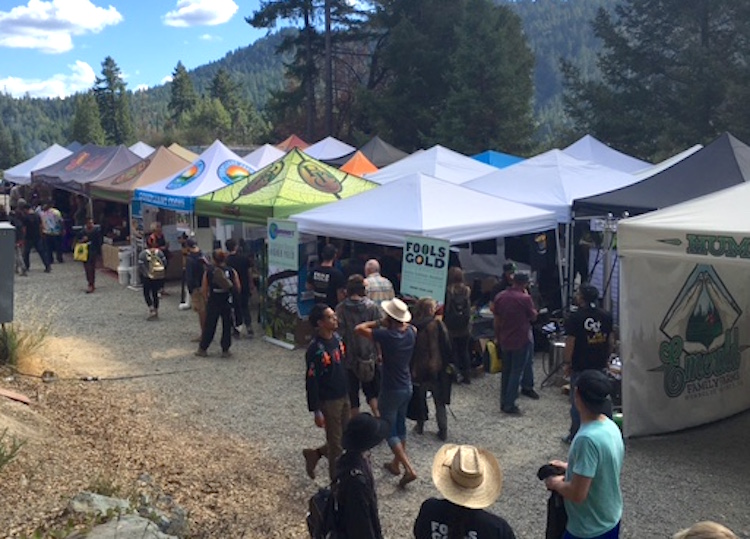 Vendors from around the Emerald Triangle set up on the grounds of the Mateel. 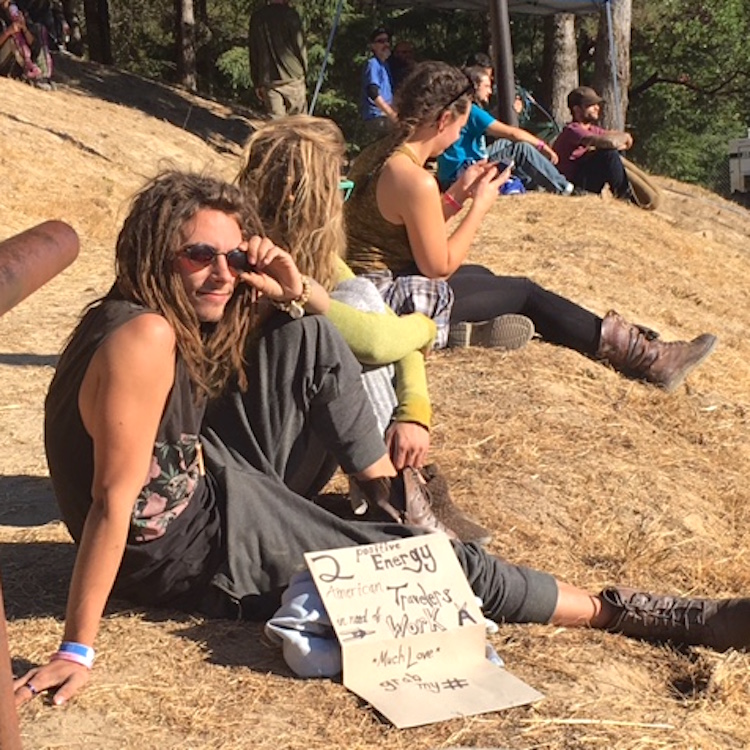 The Golden Tarp was full of cannabis lovers, farmers, and workers, like these two seeking harvest season jobs. 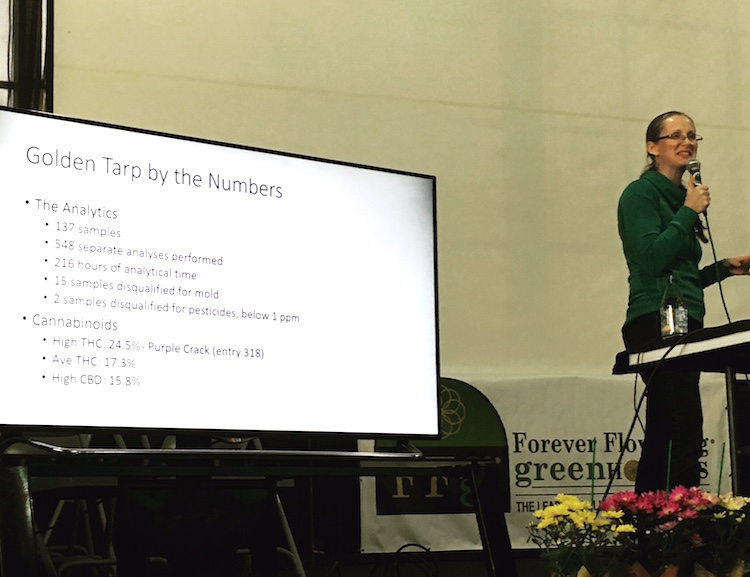 Samantha Miller from Pure Analytics gave a breakdown of the entries' testing results before the awards. 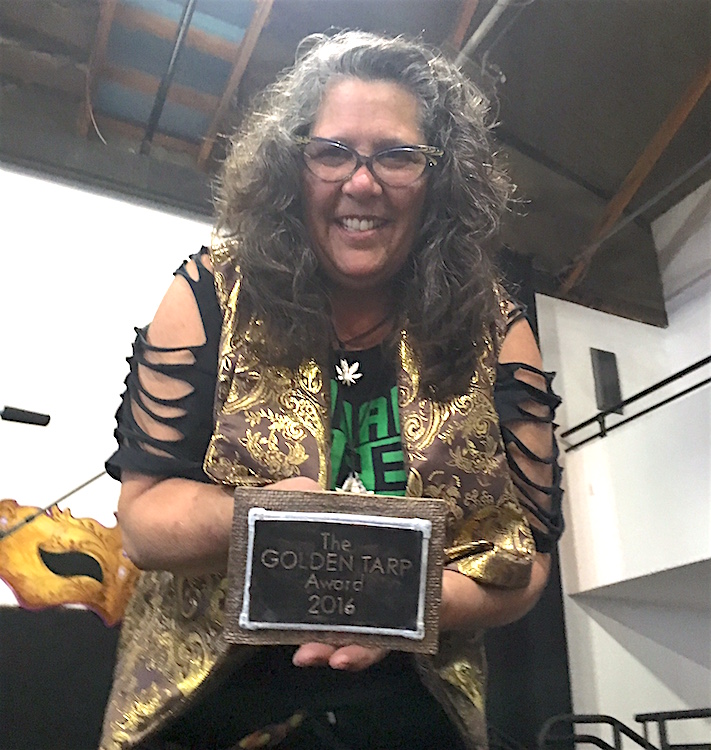 All winners got a handmade plaque from Dr. Joyce of the Bud Sisters. 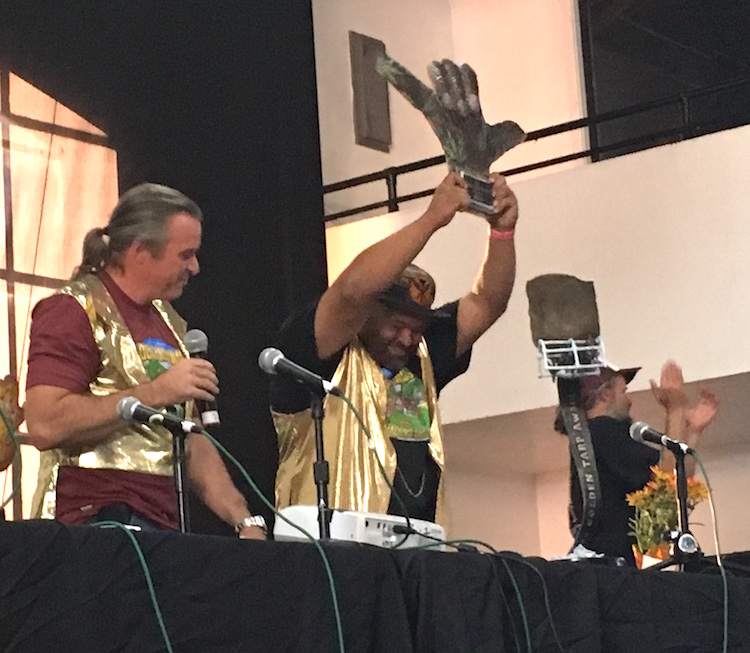 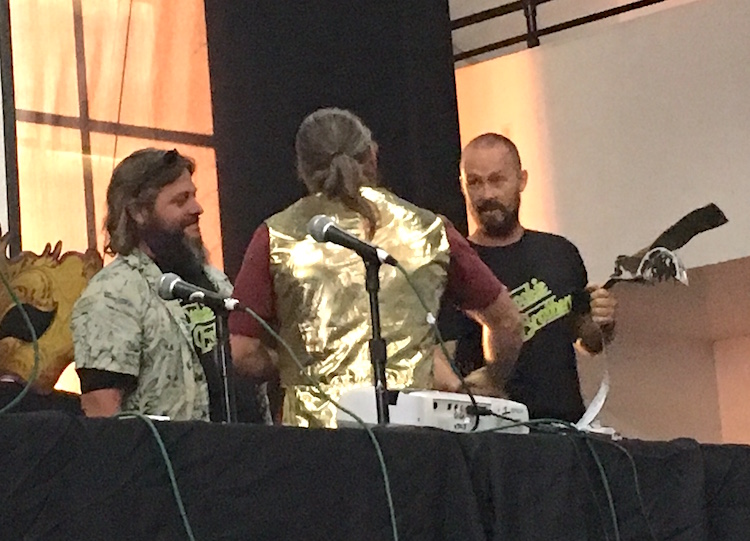 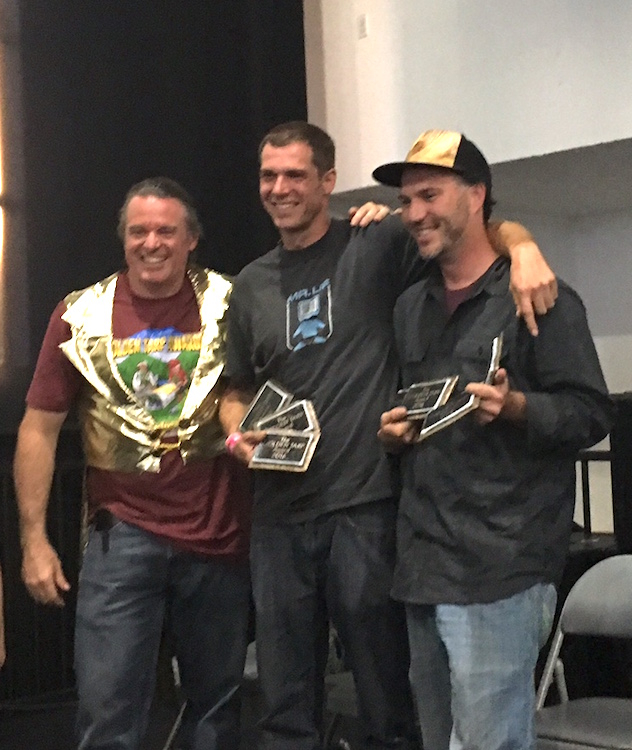 Visitors could check out the winners in the 215 area after the Golden Tarp awards event. 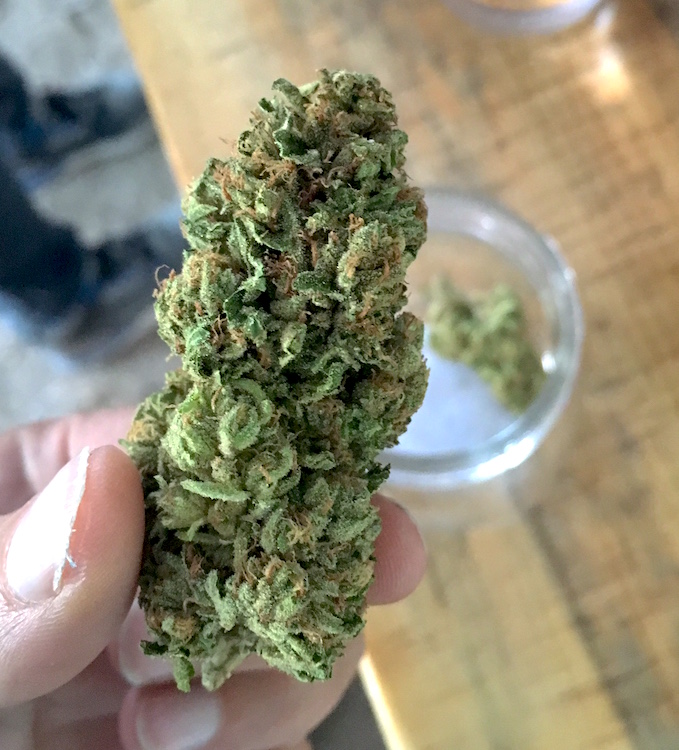 The 2016 Golden Tarp Award winner, Zkittlez, from the Dookie Brothers.

The method of “light deprivation” uses artificial manipulation of light cycles to force plants to flower during times of year they wouldn’t normally, usually by employing a combination of natural sunlight, artificial lights, and tarps for plants grown in a greenhouse or “hoop house.” The results can be of higher quality and potency than cannabis grown in “full sun,” with bigger buds and less fungal issues than indoor plants.

As “light dep” cannabis has increased in popularity, and with price points often higher than for other types of flowers, the number of entrants at the Golden Tarp awards continues to grow. This year, a total of 137 samples were sent in from drop-off points around Humboldt and Mendocino. The winners were chosen by a combination group of expert judges and ticket holders, selected in an early morning raffle the day of the event. Whisked away to an off-site judging location, the samplers spent the afternoon working their way through the bounty, ultimately choosing about 10 percent of the entries for an award.

Samantha Miller of testing company Pure Analytics — also a speaker at the event and a former Ganjier Award winner — introduced the awards ceremony to a packed house, noting her delight in the quality and variety of submitted entries, including “some really killer strain names, things I’ve never seen before.” Pointing out many of last year’s entries were popular cannabis strains like Sour Diesel, OG Kush, and Girl Scout Cookies, she applauded the creativity of growers in submitting more varied strains, as well as high levels of terpenes in the samples, which she said made for an exciting contest.

“There was a lot of work, and a lot of love, and a lot of blood, sweat, and tears, that went into these strains,” said Miller, adding “I love this event and this show because it’s the most beautiful herb I see from Northern California all year, through my lab.”

Miller explained to the audience that to ensure all samples passed quality tests — including for mold, fungal pathogens, chemical growth regulators, and other pesticides — her lab undertook 548 separate analyses for a total of 216 hours of analytical time.

In particular, Miller highlighted the difference between this year and last year’s event, when about 50 percent of the 100 or so samples were disqualified, “I wasn’t very popular last year,” she joked. In contrast, Miller pointed to a great improvement in sample quality this year, with only 15 out of 137 samples ultimately disqualified for mold, and two for pesticides, which were both tested at levels of less than 1 parts per million.

Miller congratulated the audience on the results, remarking “that’s a real win for biodynamic farming, and for people who are doing it right, because your plants only get mold when they’re not healthy…Six years ago we probably would have failed a lot of people for pesticides.” She said the change represented a growing awareness of the needs of patients as well as improvements in organic cultivation practices.

Emcee Dylan Living Earth explained to the crowd that in 2015 organizers suspected wildfires had contributed to the high levels of disqualified samples. “We had this theory, that although you weren’t putting any pesticides on it, and we know you didn’t have mold didn’t grow organically on your thing, it’s possible that the fires that consumed us all moved particulate and it landed on your flowers, he said.

Miller said the testing results seemed to confirm that a number of last year’s entries were contaminated by the large wildfires which took place near many cultivation sites or carried particulates by wind. She said she had worked with the organizers to map the origins of last year’s samples, and “you could actually correlate the incidents of mold findings to the locations of the fire, when we mapped it out.”

Miller also pointed out other differences in this year’s samples, including increases in stem diameter “of almost everybody’s flowers” and body density of the flowers increases over previous growing years. “Some of us are thinking that’s an outcome of all the smoke pollution,” from last summer, she said.

On average, Miller noted the samples had higher THC levels (17.3% on average, with 24.5% for Purple Crack, the winner) than the average sample in her lab database (16.8%). Pure Analytics also tested samples for combined cannabinoids and terpene levels, and one entry had over 28% percent combined totals. “You know coming from my lab, that means something,” she added. For CBD samples, Miller said the highest result was 15.8% (Ringo’s Gift), but the number total submitted was very low.

Ganjier founder and Wonderland Nursery owner Kevin Jodrey, wearing a golden vest created by the Bud Sisters, explained three entries were “chasing each other down the street” towards the top prize, including Black Jack (Eden Farms), Hash Plant (Tar Hill), and Skittlez (Dookie Brothers), the last which won the award by a single vote. Jodrey added that the strain is “the most controversial on the planet.” One farm, Gold County Cannabis (part of Emerald Family Farms), broke the record for most awards, which had previously been two awards. Each winner received a handmade plaque from Dr. Joyce of the Bud Sisters, with additional prizes for the top winners.

Jodrey also noted that overall, “the flowers are fantastic,” saying entries illustrated that there is “an unbelievably large amount of cannabis that’s really legitimate cannabis, cannabis that can be sold on the medical market — I call it “food grade” — it means this product is clean,” in the region. He added that if winners didn’t want to be seen publicly, “nobody’s trying to out anybody, you can come by later and get your award quietly. But I’d take it on stage!” And almost all of them did.

Jodrey also handed out two additional awards before the winners were announced.  First, the The “Golden Chakra Award” was given to William Pedro, who Jodrey commended for “always bringing such a positive spirit.” The Ganjier Award, which previously went to Samantha Miller and activist Terrance Alan, this year went to cultivator Danny Montero, who Jodrey said was shot in the chest delivering an ounce of cannabis, yet still tried to attend the awards despite being sent to the ICU.

“I knew that I needed to have him as the Ganjier Award winner because he represents all of us, he represents the struggle. No matter what boundaries this kid hit, he never stopped,” said Jodrey. Accepting his award through tears, Montero thanked Jodrey for acting as a mentor and everyone in the room for being part of the Humboldt cannabis community.

UPDATED: The awards are listed below as announced at the ceremony. The full official results (including test results) are now posted here on The Ganjier website.

2 thoughts on “Winners at The Golden Tarp Awards: This Year’s Entries Are The Best Yet UPDATED”