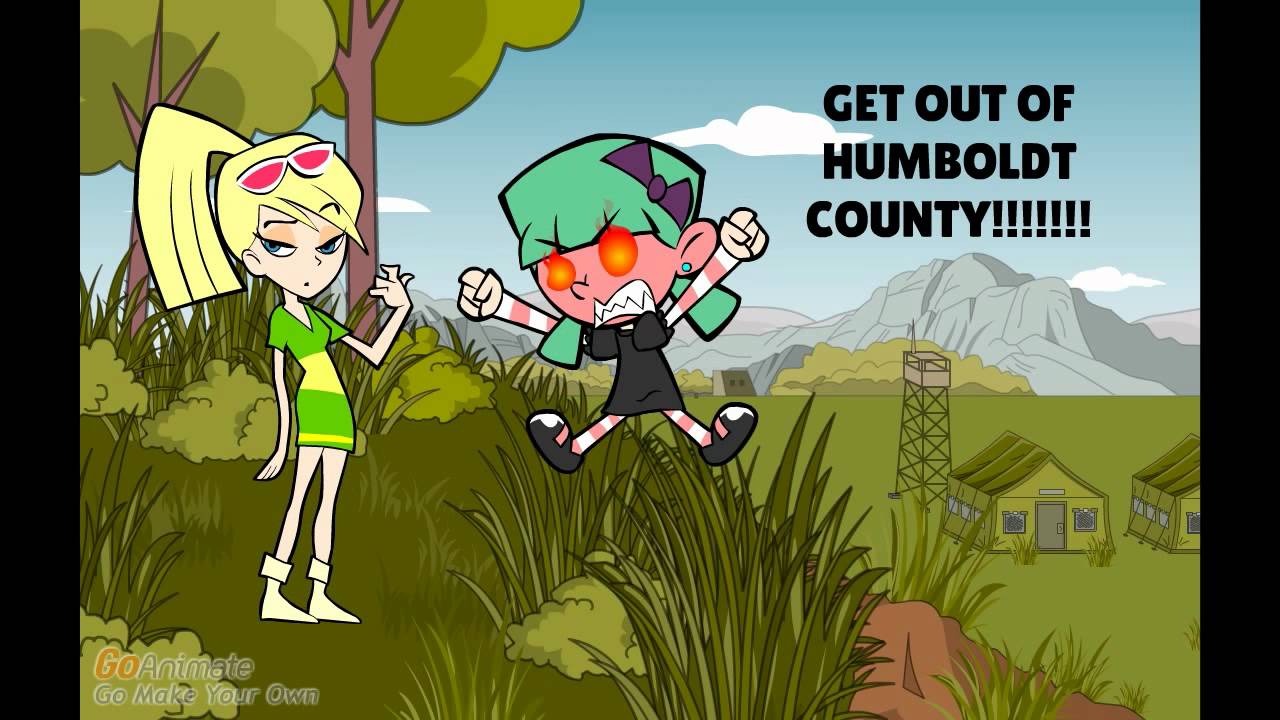 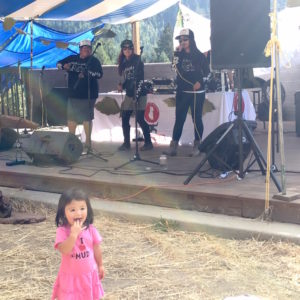 The MuMu Crew (Binacamaki, Hella Richtor, and Ms. Melby) take the stage at the Golden Tarp in front of one of their youngest fans.

The third annual Golden Tarp awards took place October 1 in Redway, and about 600 people filled the grounds of the Mateel community center to hear cannabis industry experts, network with other cannabiz owners, and watch the winners of the coveted awards for best light deprivation cannabis flowers take the stage. But the event wasn’t just about business or competition — for many, it was a place to enjoy the fruits of their labors, kick back with their friends, and listen to some cannabis-themed musical acts.

One such group was the the all-female “MuMu Crew,” a Humboldt-based band who took the stage mid-afternoon to much applause as attendees, farmers and trimmers alike, lounged on the Mateel lawn. The group performed their signature laid-back rhymes telling their stories of working in the cannabis industry from the point of view of long-time locals, who are proud of California’s most famous cash crop. Vocalist, “Hella Richtor,” told The Mendocino Voice that the group formed about four years ago with Richtor (formerly a solo performer) and Ms. Melby, but has since expanded. “We keep joining forces with some serious experienced talent powerhouses like Binacamaki, who sings raps, does it all multi-lingual, and we’re having so much fun!” Richtor wrote in an email. The group also includes musicians “Hay Hay” and “Jameel,” who weren’t in Redway), and features female performers as much as possible. 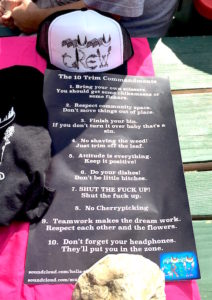 trimmers or hourly workers who have to negotiate the pitfalls of inconsistent bosses who don’t pay, saboteur co-workers, or just the problems and hilarities that arise working in on an underground cannabis farm, occasionally sampling classic beats from songs like Tupac’s California Love. The Commandments features rules such as “no cherry picking,” and “don’t forget your headphones” that will be familiar to anyone who’s been around a hill at harvest time.

The MuMu Crew, which presents the female face of cannabis workers, also takes on the complicated gender politics that occur on a trim scene, with song titles ranging from “Nor Cal Gold Digger” to “Boss Mama.” The audience, from trimmers with cardboard signs advertising their skills, to older farmers in suspenders, all hooted and shouted out encouragement after each song. “Those songs are from true life, you can tell,” said one older farmer after the set, who sauntered over to the merchandise arranged on a picnic table, where a bidding war broke out over the remaining CDs.

We caught a performance of the MuuMuu Crew’s “Why Don’t You Pay Me,” and you can listen to the audio below. We’ve also posted a video of “Nor Cal Gold Digger,” which Richtor noted is often popular during this time of year, and you can hear more of their songs on their soundcloud.

Richtor also added that the group would love to play shows in Mendocino, and is available for harvest parties at [email protected]. The Mendocino Voice saw them rock the house at the Mateel last November for the first annual “Trimmers’ Ball,” and we hope they’ll be back for this year’s event (planned for November 19).