POTTER VALLEY — The Willits Chamber of Commerce is putting together a “Supper on the Bypass” dinner scheduled for October 29th. Geared towards celebrating Willits as a destination, organizers say they aim to pair local farms with local chefs to show off just what the community of Willits has to offer. Now most of us know that the bypass has been a controversial decades, with many saying it has come to fruition in one of the worst possible ways — in regards to the environment, cultural considerations, city engineering, preservation of agricultural lands, cost, etc. 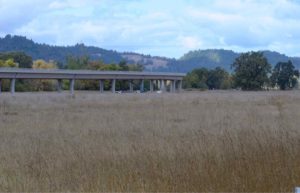 As word gets around about plans for a farm-to-table themed opening atop the bypass, event organizers are struggling with the fact that several local farms are boycotting the event and asking others to do the same. Organizers say the intent of the dinner is to bring closure to a divisive topic and bring the community together around local food. After all, where else can you get locally grown food delivered from natural farm settings to a sprawling river of concrete? Considering reactions to the dinner so far, the Chamber either needs to relocate the dinner or will face some major challenges in matching the intent of the dinner with the reality it’s facing.

I reached out to Lisa Epstein, president of the Willits Chamber of Commerce, regarding the dinner. “This is an opportunity for the whole community to come together and get some closure around a topic that has been an open wound for Willits for decades…We aren’t putting this together as a celebration of the bypass, but instead to start a lasting positive legacy and to put Willits on the map.”  Epstein recognizes the controversy inherent in any event involving the bypass, but hopes that media attention surrounding the event, from outlets such as the Press Democrat and Sunset Magazine, will be a long-term benefit for Willits as a whole.

Despite the potential for some plugs in local and national media, Sara Grusky and Michael Foley of Green Uprising Farm in Willits, have been vocally upset about the idea of a farm-to-table dinner atop the bypass. They’ve gone so far as to author a letter to fellow farmers asking them to boycott the event. ”We became involved in the protests against the by-pass project when we learned that Caltrans had acquired 2,000 acres of pasture and farmland in the valley as part of the ‘mitigation’ for damaging the wetlands that help purify valley water destined for the Eel River. That 2,000 acres represents one third of all farmland in a valley where farmland is scarce for aspiring farmers and often underutilized,” Grusky and Foley wrote. In the letter they also cited considerations of native tribes with ancestral connections to the land, some of whom are suing CalTrans over ancient sites destroyed by the construction.

One solution proposed by Grusky and others is for the Chamber to relocate the Farm-to-Table event to pretty much anywhere other than a structure that invokes so much conflict. I proposed the idea to Epstein who said, “Moving the event is off table for this year, but [the chamber is] planning to close off Main St. and do a farm-to-table dinner annually.”  When I mentioned an array of other locations, Epstein responded with, “I mean I guess we could have it in a warehouse somewhere.” She cited timing as a factor in moving the venue, as well as the fact that they sold out before even putting out a press release, leaving them with expectations to fulfill. Still, with many local farmers refusing to take part in the event as it’s planned, the farm-to-table nature of the dinner may prove similarly difficult to fulfill.

When I checked in with Epstein to ask about any updates on participating farmers from the Little Lake Valley, she told me that John Ford Ranch would be supplying meat and Anna Cox, owner of Shamrock Goat Cheese, would also be contributing. Both these ranches were directly affected by the bypass project, so I checked in with them to see how they came around to their decisions.

I called Charlene Ford from John Ford Ranch, which specializes in delicious grass-fed, natural beef. She told me, contrary to what Epstein had said, that they would not be contributing to the event, though she also expressed the hope that it would be a great success.

She said, “It felt to us like having it on top of the bypass seemed like a celebration of what CalTrans did, and for that reason we decided we wouldn’t be participating.” The Fords were one of the farms most affected by the bypass, having sold large portions of land to CalTrans to “offset” the damage done by the construction of the bypass through ecologically-sensitive wetlands.

Anna Cox, owner of Summer Breeze Ranch and Shamrock Artisan Goat Cheese, told me that she would be willing to contribute to the event. She mentioned that her willingness was no reflection of support for the bypass, but that, “The Bypass is here, that train has left the station, but we do need to work on coming together and being supportive of each other by focusing on a better future for the whole community.”

She is also pleased to hear the proceeds might, in part, benefit the local chapter of Future Farmers of America. She had heard about efforts to boycott the dinner, and it pained me to hear her say that she was concerned that opponents of the dinner might organize a boycott of her goods as a result of her participation. I personally hope this concern will not come to fruition. To me having a community-based, reconciliation-themed dinner provoke this sort of fear, seems more than a bit twisted.

After talking to many of the parties involved, if the goal of this farm-to-table event is to heal old wounds, unite the community, and make it stand out as a place to go for a small-town charm that is uniquely Willits-y, I believe it’s headed down the wrong track. A “What’s-to-Bypass in Willits” Farm-to-Table Dinner seems like the exactly the sort of thing that could happen downtown, in the park where the farmers market is held, at the Grange, or any variety of other locations in Willits proper. The idea that this event will only be worthy of Sunset Magazine or similar publications if it sits atop the structure whose very existence enables the rest of the world to skip past Willits just makes me think — screw Sunset Magazine, Willits doesn’t need ‘em nearly as much as they need local farmers! If out-of-towners need Sunset Magazine to tell them where to find a good time, let them keep thinking that Healdsburg is the last outpost between Sebastopol and Portland.

Better yet, tell Sunset whatever they need to hear and move the dinner from the bypass to anywhere else in Willits. WIth this change I’m confident you could source the entire meal from the Little Lake Valley from enthusiastically engaged farmers. Hell, I am a stone’s throw away in Potter Valley but I would gladly contribute a roaster pig or two, at cost, if the organizers changed the location to somewhere that’s less of a slap in the face to local farmers. Then the dinner could have a healthy smattering of local farmers, the types of characters who only exist in small farming communities like Willits nowadays.

Since it seems like the main reason for not moving the dinner is the expectations of ticket holders, you could even give them a special role. After the dinner we could all caravan over to the bypass and ticket-buyers could each have a special part in setting aflame an effigy of the head of CalTrans. That’d be some community-healing closure around a sensitive topic, if I’ve ever seen it.

Now it’s up to you: do you think the Chamber of Commerce should change the location of its “Supper on the Bypass” event in consideration of local concerns? Tickle the Widget below!