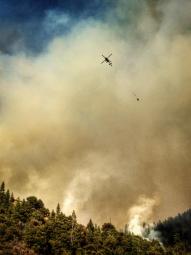 Sections of route 96 are closed due to the continued spread of the Gap Fire and evacuations have been ordered on both sides of the highway, as morning Monday. Here’s the latest (mid-day) update from the Klamath District Forest Service, with a handy video to catch you up. It’s a little technical but provides insight into firefighting strategy and the progress made since last night. Check out the link below:

Kym Kemp at Redheaded Blackbelt has also compiled a series of photographs and more detailed maps and other information here, check out her great updates! The Mendocino Voice is pleased to be partnering with Kym Kemp during our start-up phase.

The Gap Fire swallowed an estimated 25,800 acres so far. Containment lines are holding around 30% of the fire. The fire which started on Saturday, August 27 burns in thick timber for the most part.

Almost 2000 personnel are stationed at the fire. Today, crews are using fire around “the fire perimeter, as conditions permit, to remove fuel between the active fire and primary fire line. This action will reduce fire intensity and minimize the likelihood of fire crossing indirect containment line to the north.”