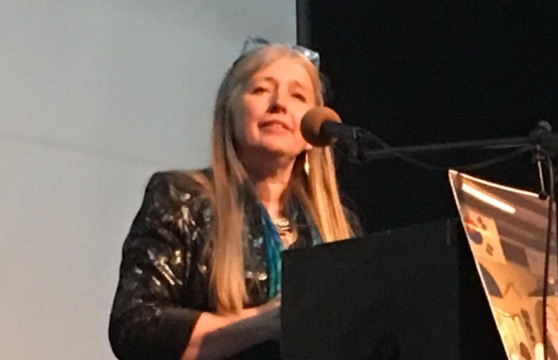 It’s said the the media likes to report on nothing more than the media itself, and while that may be true we hope you’ll forgive us this time, because SoHum’s very own one woman newspaper, the scoop of Scotia, the Mencken of the mountain, the Pulitzer of pot, the Woodward of Whitethorn, the Greeley of Garberville, the Hear(s)t of Humboldt, the indefatigable Kym Kemp, was honored as the “2016 Southern Humboldt Citizen of the Year,” by the Southern Humboldt Chamber of Commerce, at the Mateel Center in Redway on September 7.

Not only does Kemp do some of the best news reporting around, but she’s been a minor mentor to us here at The Mendocino Voice, since back when we were at The Willits News, sharing her insights about the North Coast, local reporting and news in general. Lately she’s allowed us to cross-post her stories while we get The Voice off the ground. Redheaded Blackbelt is an invaluable resource for anyone in the Southern Humboldt or Northern Mendocino area. From her home office Kemp somehow manages to cover the essentials, the biggest story and the sweetest for all of the North Coast.

We’re also happy to see kudos coming from all directions, including this article in the Redwood Times, and this tweet from State Senator Mike McGuire about the celebratory dinner: 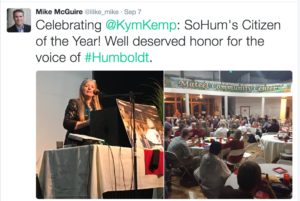 Yet, with praise abounding, Kemp remains ever the the humble servant of her readers — check out this post she wrote about the award, which includes an interview with Kemp by Izzy Vanderheiden of KMUD News.

For a person who deals with words I’m in the awkward position of not knowing how to express how very touched I am to be honored tonight with the title of 2016 Southern Humboldt Citizen of the Year.