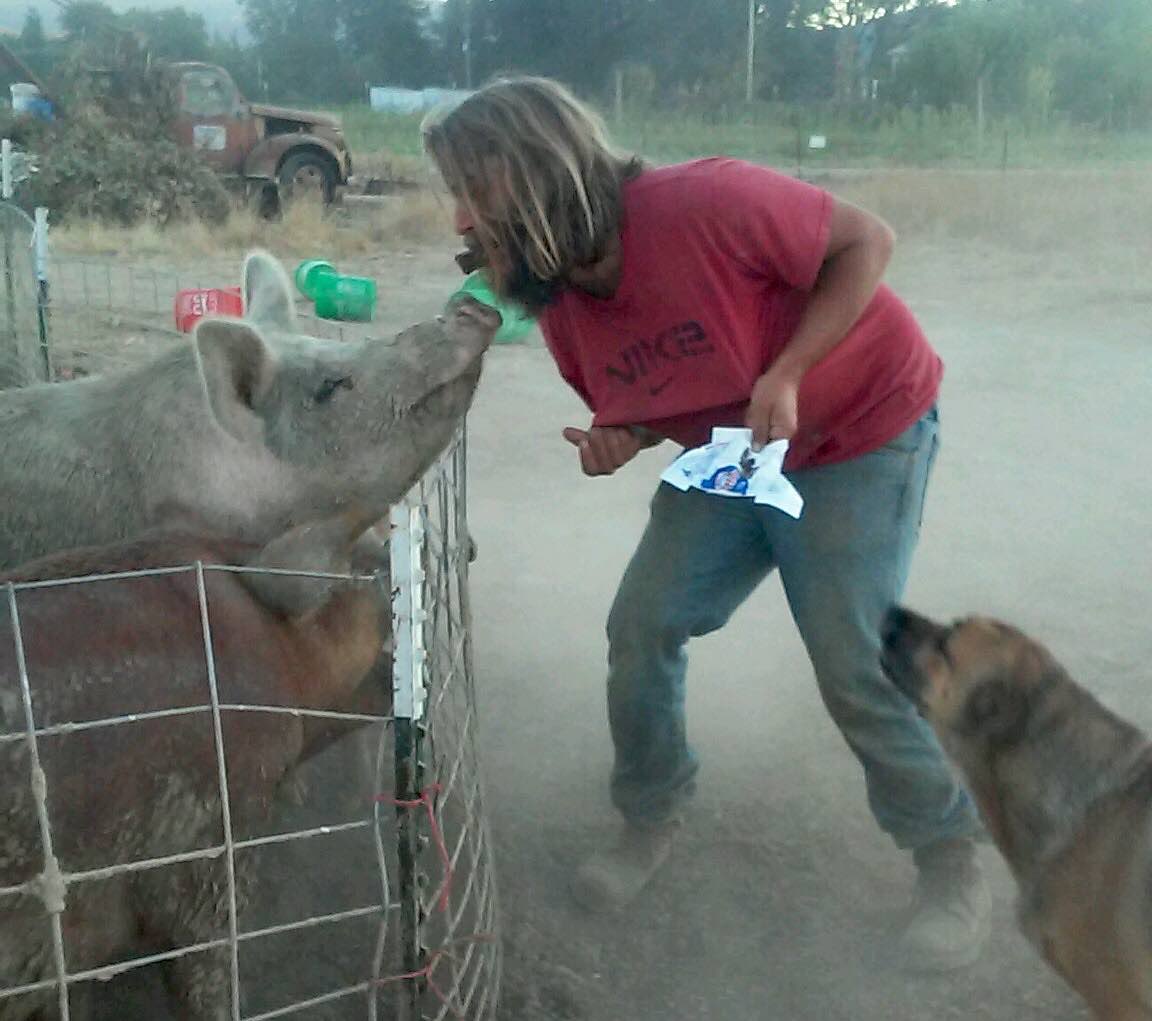 The author with his pigs.

POTTER VALLEY — In March of 2004, Mendocino County made history by becoming the first local government in the US to ban the cultivation, production, or distribution of genetically modified organisms. And I continually hear people reference this ban as evidence of our community’s supposedly progressive approach to agriculture. But as a flat broke hog juggler, always scrounging for free pig food, I know first-hand that the Mendonesian food system is bursting at the seams with GMO-tainted food waste. Meanwhile few of the farmers I know can eek out a living farming food. Furthermore, the non-GMO and organic options available, in county, are largely produced by subsidiaries of the same corporate giants that produce the GMO-laden options.

How can Mendocino claim to be a leading model of alternative agriculture when more than a decade after banning GMOs, the county as a whole is still consuming food containing these products by the shit ton? We are long past due for Mendocino to develop, and support, some more pragmatic, tangible changes in our food system, instead of priding ourselves on a largely rhetorical ballot initiative from a dozen years ago.

I, like many bacon makers, have a unique perspective on the food waste our community produces. I pick up vegetarian food scraps from places like Taste Buds and Mama’s Cafe. I owe a huge debt of gratitude to both for their accommodation and the fact that they use ingredients I never worry about feeding to my hogs. But other sources put me in a conundrum, making me question whether or not I feel right feeding those slops to the pigs on which I stake my reputation as a ham artist.

Despite the GMO-ban, the majority of local grocery stores are stocked with the same selections you’d find across the country. According to a statement from the Grocery Manufacturers Association, a trade group opposed to GMO labeling, “70-80 percent of the food we eat in the United States, both at home and away from home, contain ingredients that have been genetically modified.” This shines through, for example, when I tried out getting slops from a local private school in a nice neighborhood, or when I stop by the soup kitchen to see if they have excess goods.

Probably most alarming was my experience with slops from the private school. This was early in my slops-gathering adventures, and when they told me they couldn’t separate the meat out for my vegetarian-fed pigs, I thought I would try separating it myself — since it was a lot of food and I could get it consistently. But I didn’t keep this up for long since I immediately wondered whether I should feed any living thing the scraps found surrounding the super-processed meat.

Cheese-dusted corn chips and processed breads with a hint of nutrient-deficient veggies were the only food left. The meat I consistently came in the form that you find in packages noting something like “Contains pork, beef, horse, and probably at least some rat” — think meat products you eat off of a stick or that you might imagine are what they make out of livestock buttholes and lips. Oh, and there were a bunch of unopened snack packs of baby carrots and some mostly untouched apples. Remember, this isn’t an underfunded public school, this is at an institution where parents pay good money for their children to be nourished and given a solid foundation for healthy growth.

The most thought-provoking food waste opportunity for me to come to terms with was at the soup kitchen in Ukiah. Here, the staff makes miracles happen with leftovers from all the soon-to-expire food that retailers donate. They also coordinate with other local nonprofits to ensure as much of the food goes to use as possible. I want to be clear, I appreciate all the stores who donate these goods rather than trash them. But as someone who could potentially make use of their excess, I can say the bulk of these leftovers do not resemble the byproducts of a “GMO-free” community.

Sure, the slops I get from this source include a fair amount of spent certified organic vegetables, occasional homegrown goods, and a good chunk of locally made artisanal or organic bread that I generally cannot afford to buy for myself. But, the bulk of what our local food system leaves behind is the same over-processed conventional bread and pastries, much of which I recognize as containing at least some GMO-produced ingredients.

As a result, my pigs, for which I only ever buy certified organic grain from a local mill, often get a side of a 5 gallon bucket of rainbow-sprinkled icing-covered sugar cookies, boxes of bear-claws, and those pre-made garlic bread loaves thrown at them — resulting in an exuberantly joyful response. Consider the fact organic feed is almost twice as expensive as “conventional.” Consider that none of the organic-producing mills source 100% domestically or from North America. Consider the quality of life of factory-farmed pigs, as well as the burden this food waste was bound to be in landfills. Look into any of those issues further and you will understand why I would rather raise pigs with scraps of what our community produces than let that food go to waste and pay the USDA for a certified puritan stamp on the pork I sell. Meanwhile I seem more concerned about what customers think about GMO-containing food waste being a small fraction of my pigs diet, than the “ban-GMO” majority appears to be that these ingredients have so saturated our food system.

Think you that you bear no responsibility for this dismal state of affairs? After all, you’re the type that only buys organic, and can’t imagine how badly your possibly-imaginary GMO allergy would be set off if you supported anything that funded big agricultural conglomerates, right? Take a look into the parent companies of whatever your favorite organic brands are. Cascadian Farms? Muir Glen? Annie’s Homegrown? All owned by ConAgra.  Sweet Leaf Tea? Tribe Mediterranean Foods? Both acquired by Nestle. Rudi’s Organic Bakery? Spectrum Organics? Garden of Eatin’ and Arrowhead Mills? All part of Hain Celestials. The huge majority of the healthy-alternative products we consume are made by subsidiaries of the same corporate giants that steer the unhealthy food system makes so many of us sick. If this is true, how effective has Mendo’s pride and joy GMO-ban really been in challenging the status quo that motivated it in the first place?

These major organic brands make the option of buying organic viable to only a small segment of our convenience-focused society. I can tell you this because I am sure as hell that local farmers are not producing enough food to make a dent in the county’s total food consumption. If, for the vast majority, the corporate large-scale, organic producers are, at least to some degree, lining the pockets of the same conglomerates like the top-100 Food Producers mentioned, I do not see supporting them as the revolutionary act that can keep up Mendocino’s reputation as a groundbreaking food-focused community. I’d bet nearly every truck delivering food to Mendocino carries GMO-produced ingredients on it to this day. Till that changes, don’t doubt that if you come see my piggies, I won’t be anything but proud to tell you where they get the rainbow-sprinkle icing that might be smeared across their backs.

As to not be a hypocrite, I’ll include some tangible steps to take to counter this David vs Goliath situation. If you want to find out what major organic products are sold that are subsidiaries of Pepsi, Coca Cola, cigarette companies and the likes, check out research done by Philip H. Howard at MSU, (google organic processing industry structure and MSU), it’s terrifying. Then, go check out the Westside Renaissance Market on Clay St. in Ukiah. The owner is the very handsome Scott Cratty. He manages the Ukiah Farmers Market, is general manager of the Mendocino Co. Farmers Market Association as a whole, and runs the only store I know of that comes anywhere even close to having 50% of its goods produced locally. Much like the farmers around here, he could be doing much better for himself in “conventional” terms if he weren’t so dedicated to those he serves.