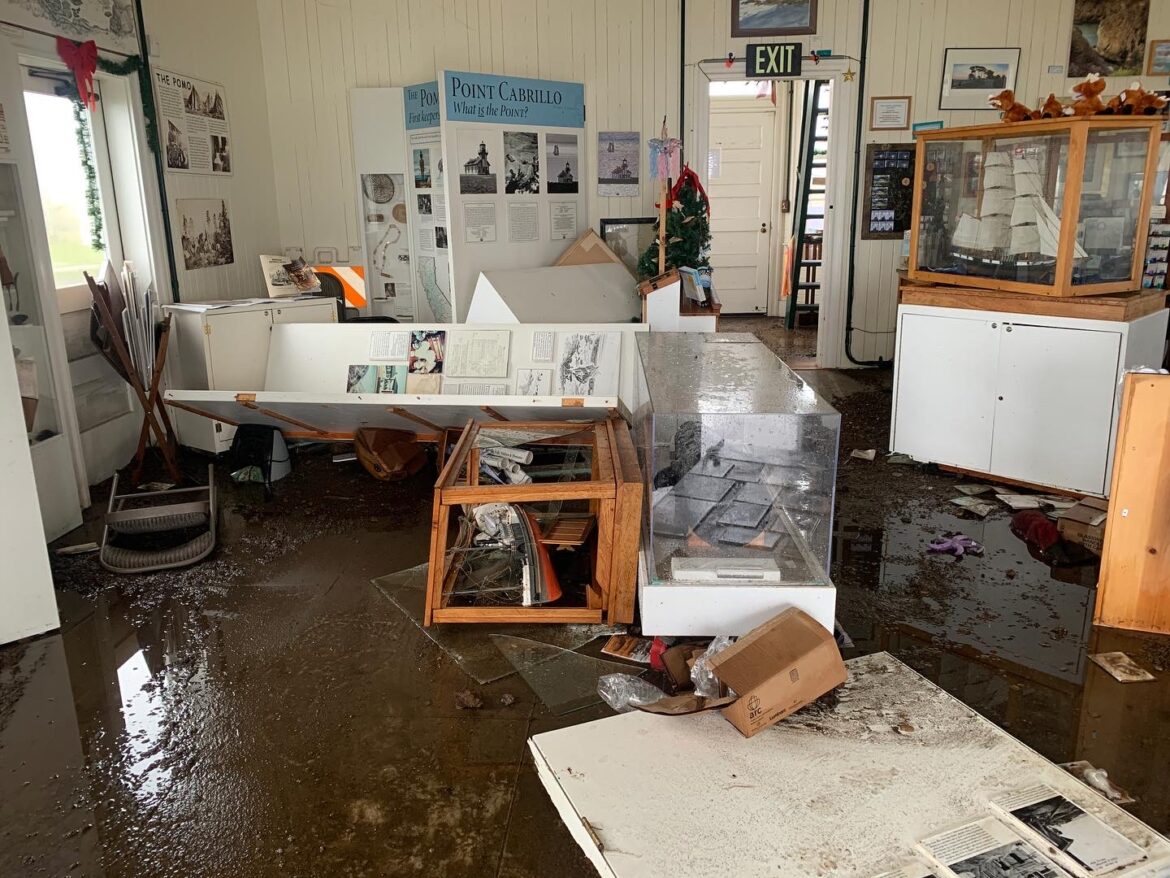 CASPAR, CA, 1/6/23 — When Jen Lewis got a call from the Point Cabrillo Light Station’s alarm company around 8:30 a.m. Thursday, saying motion sensors had been set off on the west side of the building, she had a feeling they weren’t dealing with a break-in. A short time later, Lewis — the lighthouse’s fundraising and outreach manager — arrived to find a California State Parks maintenance crew on site, the lighthouse’s back doors blown open, and the downstairs museum soaked.

Lewis went upstairs to check on the lighthouse’s irreplaceable asset — its lens — when she heard the state parks crew shouting for her to stay up there. The crew dashed to safety, and all watched as another wave crashed up the cliffside and through the lighthouse doors.

Having volunteered at the lighthouse since 2016, the height of these waves was like nothing Lewis had seen before. In fact, it mirrored a story she and her fellow “lightkeepers” love to tell about a storm in 1960, when the lightkeeper at the time chose to abandon the lighthouse amid rising waves, and then turned around to see a large wave hit the light itself.

“Today was both heartbreaking and awe-inspiring at Point Cabrillo,” Tanya Smart, board president of the Point Cabrillo Lightkeeper’s Association, wrote in a message to volunteers. “The damage the storm did to the interior of the Light House and Fog Signal building was heartbreaking, the power of the ocean that did that damage was awe-inspiring.”

The downstairs was flooded with around two feet of water, meaning the museum and gift shop are closed and will likely remain so for weeks. Lower level museum displays, exhibits, and items for sale in the gift shop suffered “significant damage,” according to an update.

Models of several ships significant to the area were threatened by the sudden water, and one was damaged.

“The irreplaceable model of the Frolic was not damaged (though the display case was moved significantly and the model portion was resting 45 degrees off its base),” Smart wrote. “Sadly, the cabinet holding the Doris model was severely damaged and the Doris model itself may not be salvageable.”

In the aftermath, volunteers from the Point Cabrillo Lightkeeper’s Association and rangers, lifeguards, and maintenance workers from California State Parks rushed into action to begin repair efforts: patching the back doors with plywood; sweeping away mud, gravel, and water; and beginning to separate out damaged items.

“All of us are out here because we’re obsessed with this place,” Lewis said. “Something like this is a huge hit to us emotionally.”

For those looking to help, the nonprofit is always accepting donations online. Lewis said many have gotten in touch offering their labor as volunteers — but while the lighthouse may put out a call for volunteers on social media in the coming days, the staff is taking a moment to decompress and assess what’s needed. In Smart’s words: “Thank you, thank you, thank you, but not just yet.”

Lighthouse staff also used this opportunity to remind community members to exercise caution and steer clear of the ocean on stormy days — which are expected to continue this weekend.

“The storm is not over, so be careful out there,” they wrote. “Please be respectful when parks and trails are closed, as it is for your own safety.”