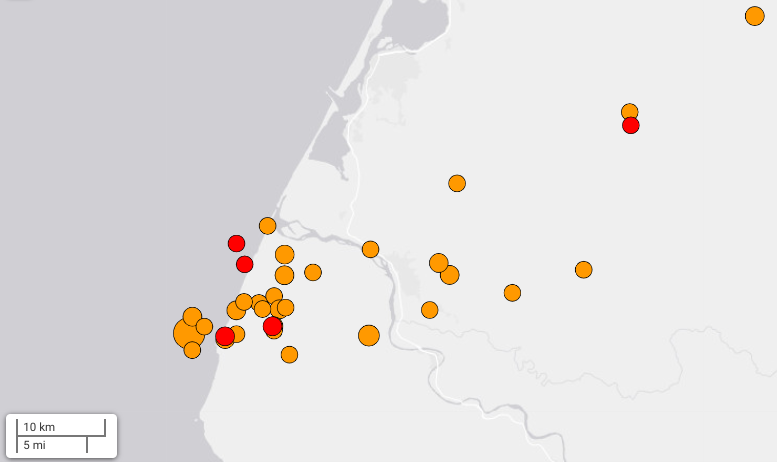 Screenshot of a USGS map showing a swarm of several dozen earthquakes across a wide swatch of Humboldt County.

UPDATE: 7:45 p.m. — Humboldt County Sheriff William Honsal provided new details today about the two fatalities reported in this morning’s earthquake, stating that both victims were elderly individuals who could not immediately be reached by first-responders.

“It was a 72-year-old and an 83-year-old …. who did not get timely medical care because their medical emergency happened at the moment of the earthquake,” Honsal said during a press conference in Rio Dell. “EMS couldn’t get there in time and we couldn’t deliver them to the proper medical facilities.”

Additional details about the identities of the decedents and the circumstances of their respective deaths have not yet been made public.

Rio Dell City Manager Kyle Knopp said an estimated 30 people have been displaced from housing as a result of damage from the earthquake, and that number could rise to more than 100 over the coming days. The city had a population of 3,363 in the 2010 Decennial Census, according to Wikipedia.

Knopp specified that least 15 residences in town had been “red tagged” as of this afternoon, meaning they are not currently safe for human habitation. At least 18 homes have been “yellow tagged,” meaning they sustained damage from today’s earthquake but conditions within the building are not life threatening. Those numbers are expected to increase as additional structures are assessed in the coming days.

UPDATE, 2:35 p.m. — The 6.4 magnitude earthquake that struck Humboldt County around 2:35 a.m. today resulted in at least two deaths and 11 injuries, according to an update from the Humboldt County Sheriff’s Office. The exact nature of those deaths has not yet been publicly disclosed, but officials said they were “a result of medical emergencies occurring during and/or just following the earthquake.”

There were an estimated 70,000 customers faced with electrical outages as of noon, and PG&E is working to restore service. Water infrastructure has also been compromised, although the extent of the damage is still being assessed.

The earthquake was felt from Redding to the Bay Area, state officials said during a press conference about the earthquake, and a “strike team” of Caltrans personnel have been deployed to Humboldt County to inspect bridges and major roadways for public safety hazards.

Cynthia Pridmore, with the California Geological Survey, said there have been roughly 40 earthquakes from magnitude 6 to magnitude 7 in this region over the last century — so today’s seismic activity is not unusual.

MENDOCINO Co., 12/20/22 — Residents of neighboring Humboldt County were jolted awake in the middle of the night by a magnitude 6.4 earthquake near Fortuna that damaged homes and roadways around 2:35 a.m. Dozens of aftershocks have been recorded in the surrounding region, including a 4.6 magnitude temblor recorded at 2:39 a.m. and a 4.2 magnitude at 5:56 a.m.

As of 7 a.m., power was still out for thousands of PG&E customers.

No tsunami is expected in association with this seismic activity, according to information from the National Weather Service in Eureka, but the extent of the damage is not yet known and Caltrans reports at least one bridge has been closed while workers evaluate safety concerns.

The Humboldt County Office of Emergency Services said in a Tweet that widespread damage to homes and roads has been reported. The Humboldt County Sheriff’s Office is asking residents not to call 911 unless they have an emergency in order to reduce strain on resources and communications for first-responders. Anyone with travel plans taking them through Humboldt County may encounter challenges and is urged to use caution.

Did Mendo readers feel the quake? Tell us where you were and share pictures of damage on social media or via email at [email protected].