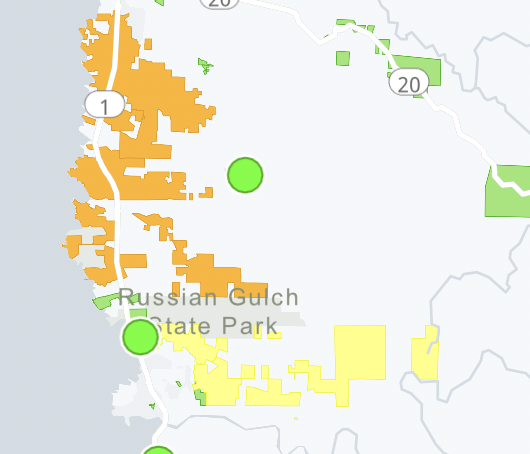 UPDATE 3 p.m. 12/27/22 — Caltrans is reporting that flooding has closed State Route 128 between State Route 1 and Navarro, or mile marker 0 and 12, with no current estimated time of re-opening.

The National Weather Service is reporting that the Russian River near Hopland has reached flood levels, but so far there are no current reports of flooding in the area. In addition, the South Fork of the Gualala River reached 21.98 feet but now seems to have begun to recede.

PG&E crews have arrived at or are on the way to the outage locations, but so far the company has not provided any estimated time of restoration; the cause of the outages are on the PG&E outage map are listed as either “equipment” or “weather.”

You can find the PG&E outage map here, with details about each outage, as well as sign up for notifications for your address on their website.

MENDOCINO Co., 12/26/22 –  Mendocino County and the North Coast are bracing for an “atmospheric river,” currently expected to arrive on Monday evening with multiple inches of precipitation. High winds are forecast throughout the region, and a flood watch is in effect for Mendocino County until Tuesday morning. Additional rain is predicted later in the week, according to the National Weather Service (NWS).

NWS Eureka has issued a high wind and flood watch in effect for the majority of Mendocino County and the North Coast between Monday evening and Tuesday morning, Dec. 26 – 27. Residents should prepare for multiple inches of rain in less than 24 hours, and for high winds which may result in power outages.

According to NWS, “Excessive runoff may result in flooding of small rivers, creeks, streams, and other low-lying and flood-prone locations. Creeks and streams may rise out of their banks. Flooding may occur in poor drainage and urban areas. Low-water crossings may be flooded. Storm drains and ditches may become clogged with debris. Extensive street flooding and flooding of creeks and small rivers are possible.” In addition, flooding may continue once the rain has ceased as runoff continues to flow towards low lying areas and rivers. High surf is also expected with waves up to 25 feet.

Motorists throughout the region are encouraged to drive carefully through forested areas throughout northwest California today and tomorrow due to high winds and the risk of fallen trees and limbs in the roadway:

Check back with The Mendocino Voice for more information, and follow NWS Eureka on Twitter for real-time updates on this situation as it unfolds!