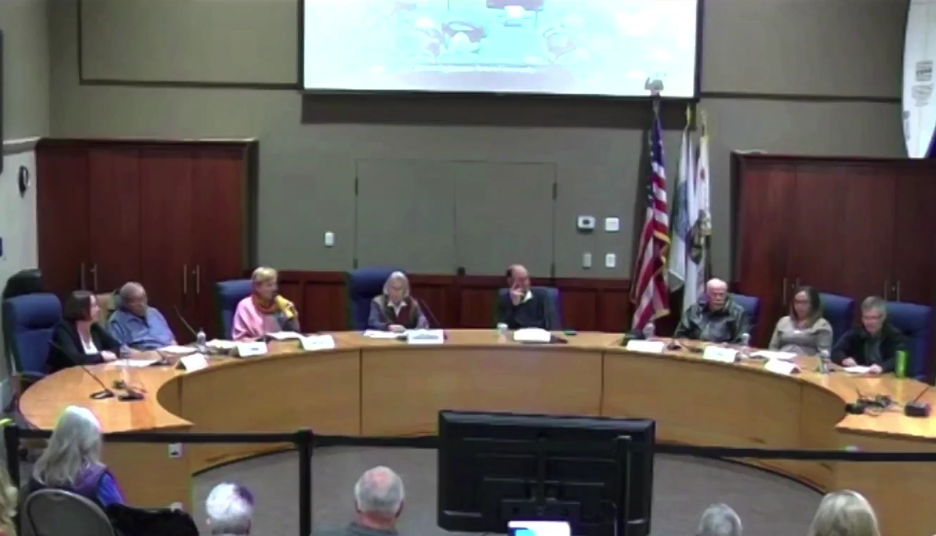 FORT BRAGG, 10/20/22 – Incumbent Fort Bragg City Councilman Lindy Peters performed cogently at a candidates forum presented  by the League of Women Voters of Mendocino County Friday night at city hall – detailing his intentions to stand up against the Skunk Train with regard to the former Georgia-Pacific millsite as well as articulable positions on housing and drought. He’s running unopposed, however, for a two-year seat.

Fort Bragg business owner Alberto Aldaco’s name will be on the ballot, but Aldaco has confirmed to The Mendocino Voice that he has informally withdrawn from the race. No other candidates are running for that two-year term.

The rest of the race remains competitive, with three open four-year seats and nine candidates running for them. Eight appear on the ballot, but incumbent Tess Albin-Smith is running as a write-in candidate.

“Being a write-in candidate may seem like a handicap, but I now see it as an opportunity to do something fun,” Albin explained in her closing argument. “You can write in my name, Tess Albin-Smith, and I will win!”

Incumbent Marcia Rafanan is running for re-election, but did not participate in the forum due to a scheduling conflict. Several written statements were read aloud on Rafanan’s behalf, including the following: “I am a registered member of the Sherwood Valley band of Pomo Indians… I will be with my tribe and family for our annual hunting and gathering to provide food for our families for the coming year.”

Rafanan was appointed to a two-year term, and is now running for a four-year term. Candidate Jason Richard Garcia was also absent from the forum.

Five of 11 candidates are women. City Clerk June Lemos stated in a recent phone call from The Voice that she was proud to see them on the ballot, and could not recall another election in which so many women had sought a seat on the council. Here is the full list of candidates:

Six of the eight candidates present for Monday night’s forum took a united stand against the Skunk Train and with regard to the railway’s efforts to acquire the former Georgia-Pacific millsite through eminent domain. Rich Mohr, who said he moved to Fort Bragg three years ago, liked a vision for the millsite articulated by the railroad’s publication “Little Stinker,” including plans for a 160-room oceanfront hotel. Candidate Scott Taubold also declined to criticize the railroad, stating, “I guess I just have a more positive opinion than I’m hearing from the rest of the people up here. Not to mention, I have a lot of fond memories of the Skunk Train.”

All stated they had accepted no donations from the railroad.

Mary Rose Kaczorowski, who has written for the Voice, suggested efforts to address the housing crisis by supporting the construction of residential units in commercial corridors, as well as improvements to currently uninhabitable structures so they can once again be lived in. Kaczorowski also pitched a ballot measure to enact a business tax on landlords who own five or more residential properties, pointing to model legislation such as Measure O in East Palo Alto.

Candidates were broadly supportive of a wide range of solutions to the ongoing drought, including increased water storage, reclamation and desalination – including new reservoirs, wells, and potentially dams.

Michelle Roberts acknowledged that the impacts of water scarcity are only going to get worse, and simply adding more storage capacity won’t fully solve the city’s problem.

“Everyday we pump about 500,000 gallons of treated wastewater into the ocean. We should explore ways to recycle and reuse that water,” Roberts said. “With technology it’s possible to make it potable, after you get over the ick factor.”

Blanca Pena, a crisis mental health clinician who grew up in Mendocino County, moved back last year to raise children here after pursuing a career in public health and criminal justice.

“I can’t promise to fix everything but I can promise to face challenges with fairness for the people of Fort Bragg,” Pena said in closing.

Due to the unusually large number of candidates competing for a seat on the council, the League of Women Voters was compelled to use an atypical format for Friday night’s forum. Candidates were given the opportunity to make a two-minute opening speech, asked for their positions on the drought, housing, and the lawsuits regarding the Skunk Train, then given two -minutes for a free-form response to their choice of nearly a half-dozen topics suggested by the audience, and finally two more minutes for a closing statement. Responses were necessarily brief.

Voters can find the full video near the bottom of the city’s website or by following this link.

Elections are Tuesday, Nov. 8, 2022, and mail-in ballots have already gone out. For more information about where and how to vote check out the City of Fort Bragg’s city elections page or Mendocino County’s elections office online.