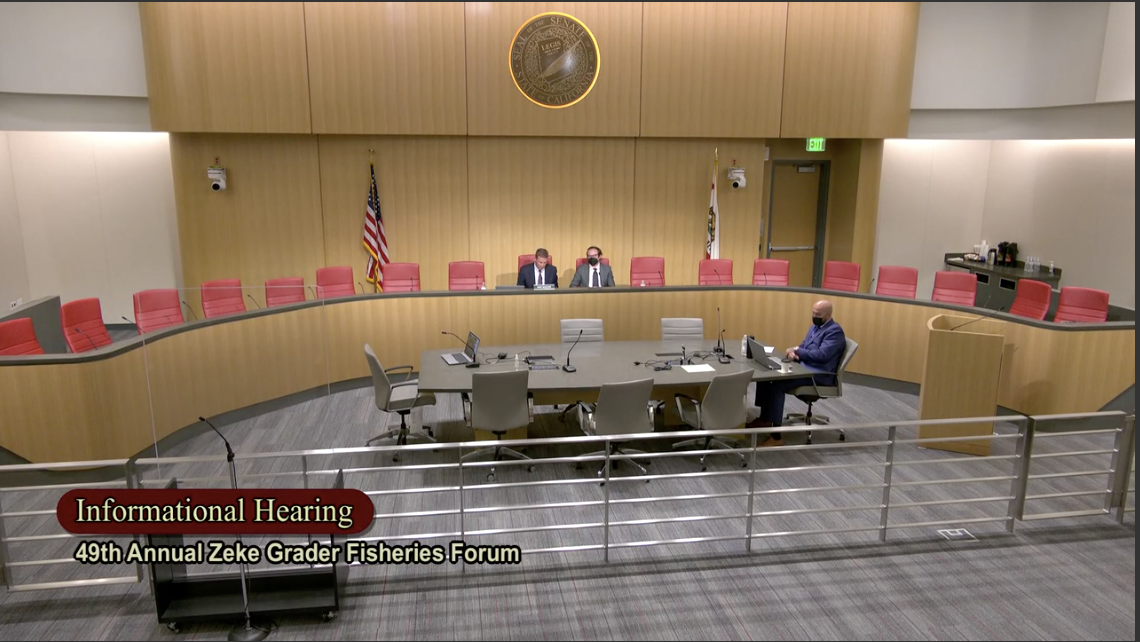 CALIFORNIA, 10/23/22 — Dispatches on the state of California’s fisheries this year have brought “a mix of some glimmers of better news, while still struggling with difficult issues,” California Department of Fish and Wildlife (CDFW) Director Chuck Bonham summarized at the 49th Annual Zeke Grader Fisheries Forum on Wednesday afternoon.

The forum was moderated by State Senator Mike McGuire as part of the Joint Committee on Fisheries and Aquaculture. In addition to a detailed report from Bonham, the afternoon featured panels on drought and salmon, the dungeness crab season, the state of California’s kelp forests, and aquaculture — as well as a brief public comment period.

“A healthy ocean means a healthy fleet,” McGuire said during the discussion on the upcoming dungeness crab season. Following the recent passage of a $54 billion climate package, the effect of climate change on California’s marine environments colored every conversation and presentation, with input coming from commercial fishermen, professors, scientists working at state agencies, tribal leaders, nonprofit leaders, fisheries organizations, and others.

In the words of George Bradshaw, president of the Pacific Coast Federation of Fishermen’s Associations, the health of California waters, and so its fisheries, has a “direct effect to the local communities and the local economies.”

So before the forum returns in-person in 2023, expected to be “bigger and better than ever” complete with a fish dinner, here are more details from the meeting — from the state of Coho and Chinook salmon, to the presence of domoic acid, to restoration solutions for our suffering kelp forests.

Bonham provided a litany of statistics on California’s fisheries, primarily focused on salmon restoration. Bradshaw described it as a fishery “running on life support,” but there was some good news too; Bonham said the 2021-2022 Coho salmon escapement — a metric used to determine the size and health of salmon stock — in our North Coast streams was about 20% higher than the long term average, making it the second highest year for salmon stock in the last two decades.

But in the Central Valley, the 2022 fall run recreational Chinook harvest was about 50% less than last year’s, Bonham reported.

He is optimistic about a project to return winter-run Chinook salmon to the McCloud River, in collaboration with the Winnemem Wintu. The salmon have been absent from these waters for eight decades; the tribe and CDFW returned 28,000 eggs to “their ancestral waters,” later driving approximately 1,000 salmon to the Sacramento River. CDFW is also working with irrigation agencies toward “more stable flow regime management strategies” in a stretch of the Sacramento River running through the Upper Sacramento Valley, with hopes of reducing redd dewatering in this area.

Damon Goodman, the Mt. Shasta-Klamath director for CalTrout, praised the McCloud reintroduction but said these are “emergency actions.”

He encouraged the state to implement or go forward with several dam removal projects in California’s rivers, saying “What we want to see is volitional passage access.”

In the words of Kate Poole, senior attorney with the Natural Resources Defense Council, “our archaic water rights system is killing off wild salmon.” She explained that mortality below the Shasta dam is exacerbated due to warmer waters, caused in part by the outsize rights of senior water right holders established decades ago during a “violent and very racist period in California’s history.” She recommended that the state participate in water rights negotiations with the Bureau of Reclamations to ensure that no water rights holder is entitled to more than a river’s capacity.

“The state has ample legal authority to mitigate many of the inequitable effects of our water rights system,” she said.

“Our river is sick,” Chairman Joseph James of the Yurok Tribe shared in the meeting. There are many problems plaguing the Klamath.” He cited drought, dam disruption, disease, and disastrous population effects from the McKinney Fire’s flash flooding.

Bradshaw called for the committee and state to convene salmon stakeholders together to discuss policy, similar to initiatives around the dungeness crab fishery. He pointed out that salmon used to underpin communities as crab does now.

“Twenty-five, 35 years ago, the salmon fishery used to be the same,” he said.

Bonham reported that domoic acid numbers have remained low in recent testing samples, meaning California’s dungeness crab fishery is on track to open as scheduled without risk of shellfish contamination by the harmful algae.

Craig Schuman, marine region manager with CDFW, said high rates of humpback whale entanglement last year led the department to restrict the use of traps through mid-December, and that the fishery closed in late March after a few entanglements.

“The fleet did quite well,” he said, citing $53.5 million worth of crab caught — less crab than normal, but with more money made for the haul. His department plans to conduct at least 10 risk assessments related to crab trapping and entanglements, and also has received two applications to test alternative gear.

Commercial fisherman Dick Ogg reported that the fleet has focused extensively on mitigating any harmful impacts, from recovering gear as soon as it’s allowed, to tightening line scopes, depth adjustments, setting gear when whale interaction risk is lowest, and removing line leads. He also said that he’s seen higher whale populations than in past years.

“On a daily basis, we encounter large numbers of humpback whales when we’re in the water,” Ogg reported. “This should truly be considered a win for all parties concerned.”

Platt also opposed pop-up and ropeless gear, saying his association is “united” against these alternative approaches, which they find “unaffordable, inefficient, and slow.” Schuman argued, “that’s where the testing comes in.”

Despite disagreements on approach, Kate Kauer of The Nature Conservancy said that the crab fishery has modeled the use of functional data, experimental fishing permits, and partnerships to fill resource and capacity gaps.

“The dungeness crab fishery is leading in the implementation of what we consider to be climate-ready fisheries management in California,” she said.

For kelp, “statewide deforestation” unlikely; “It will be different, though”

The fisheries forum hosted its first ever panel on kelp forest restoration this year. McGuire said that the committee has been “inundated” with requests and commentary on Northern California’s overpopulated purple urchin, and establishing a commercially viable purple urchin market was among the ideas discussed on Wednesday.

The story of kelp decline stemming from the die-off of sunflower sea stars, “The Blob,” and warm El Niño waters is a familiar one on the North Coast. Though bull kelp have been “historically resilient to individual stressors” in the words of Michael Graham of Moss Landing Marine Laboratory and San Jose State University, the confluence of issues led to more than 96% die-off within a period of a few years.

While restoration efforts in Mendocino in which commercial divers removed purple urchin have proved successful, the state needs to “invest in kelp” and “scale up the way that we deal with purple urchins” for a shot at stabilizing this critical component of California’s marine ecosystem, according to Sara Hamilton of University of California Davis’ Bodega Marine Lab.

Hamilton explained that, since sunflower sea stars are “functionally extinct” and unlikely to rebound on their own, transplants and captive breeding could be a key way to help kelp by reintroducing a natural purple urchin predator. She cited a program in Washington as meeting with some success with only one scientist, two lab technicians, and a large lab space as “not a huge investment” that could produce large returns.

If we started today, she estimates substantive impact on the ecosystem could be between 10 and 15 years away.

Hayley Carter, senior science officer from the Ocean Science Trust, supports public-private partnerships to establish experimental fishing permits for kelp and seaweed farming to develop aquaculture permitting around kelp. Graham feels we should “release the Kraken” when it comes to learning from the commercial kelp industry.

Jenn Eckerle, of the California Natural Resources Agency and Ocean Protection Council, reported on the council’s restoration toolkit and framework for ecosystem-based management, explaining “no fisheries management plan has attempted to incorporate these components.” Her work for state agencies takes a “learn-by-doing approach” to this unprecedented issue, too.

According to Graham, climate change is a “constant oppressive force” that makes it difficult to predict whether these ecosystems can rebound. He speculates that giant kelp could move up the coast, should bull kelp not resurge in our area.

“I’m not looking at statewide deforestation at the level that there will not be any kelp in the system,” he said. “It will be different, though.”

Archived video of Wednesday’s forum can be viewed here. Follow-up information from experts will be shared on the Committee website.

One thought on “‘A healthy ocean means a healthy fleet’: salmon, crab, kelp, and climate the focus of annual fisheries forum”