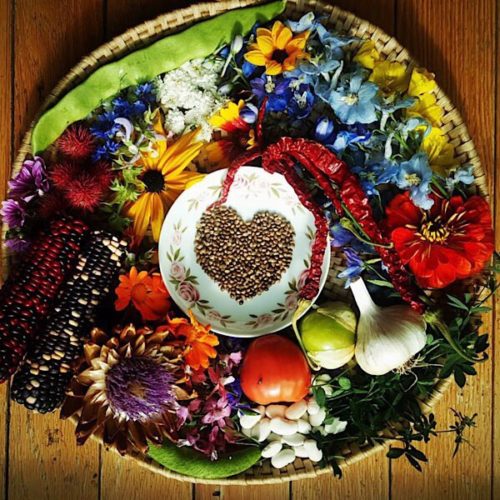 "A rainyday altar to #seeds This #ephemeralart project made of plants and seeds are all saved by us, or are now "volunteers" naturalized to our farm. Everything was collected from within 40ft of our #home" - from the Happy Day Farms Instagram

I love playing music. After 25 years of percussion, there is so much familiarity to the drum, yet still so much new and exciting every time I play. Music ebbs and flows in my life, some years I don’t play at all, and some years I play often. This summer we’ve been playing every week at the end of our mountain farmers market, and the consistency and constancy of the music brings me great joy, while the changing faces and instruments makes things variable and interesting.

Jam sessions with whoever makes it each week have meant a tremendous variation in what we play, from tempo to rhythm to cadence. Sometimes there are more string instruments, sometimes wind instruments, always plenty of drums. I relish the trancelike state of a strong drumbeat, the patterns set by others so that we weave a tapestry of sound. I love to move through the spaces in the beat, playing my box drum with a set of brushes that allows for lots of combinations and rapid double taps.

Twice a year we go out to Usal for a big campout and I play music through the course of the whole weekend. I return to the farm invigorated and feeling committed to drumming, but the consistency always seems to slip away. This is the first year that I’ve kept up that commitment, and it makes me happy to play each week and to look forward to the sessions as the hot days of summer slip by.

Hooray for September! Though the days are still brutally hot, the nights have begun to cool off some which makes all the difference. We’re turning the corner into the home stretch, working on getting fall and winter crops in the ground and bringing in the bounty of summer.

Our farm is up on the ridgeline, so we don’t see the early frosts that hamper growth in the valley. The first hard frost often comes after Thanksgiving, which means we have a long window for hot crops that allows for more succession plantings and later harvests. We sowed the last of the cukes at the end of July, by far the latest we’ve done, so it’s a bit of an experiment but with the season extension from the caterpillar tunnel I’m hopeful that it will work out well. The vines are about 4 feet tall now, climbing up the trellis and just beginning to show some flowers.

After a few weeks of hoping to get to it, I sowed carrots with the Jang seeder in two long beds. I watered them very well, put the drip back down and covered the beds with old dep tarp with the white side up. I also sowed a few beets to use as indicators; when they start to germinate I’ll know that it’s time to take the tarps off because the carrots will be close behind them. Carrots take as long as 2 weeks to germinate, and maintaining soil moisture during the heat can be very difficult. This is the first time I’ve tried the tarp method, though I’ve read about it working well for other farmers, so I’m hoping for a strong crop of sweet and tasty winter carrots.

I imagine that farming is something akin to conducting a symphony, each crop an instrument that creates a complex melody and rhythm. The main workhorses that set the beat on our farm are tomatoes, salad mixes, cannabis and squash, while cucumbers, melons, root crops and peppers sing the chorus. Okra and basil drop in for some solos and eggplant plays the tambourine.

Over the course of the year the farm plays at different cadences, some more uptempo and frenetic, some slow and reflective. I appreciate the little pockets in the beat, the shifts that happen with the seasons and the new instruments that join the music as we learn about new crops and take on different animals to raise.

As we wind our way towards the end of summer the light is changing and the days are shorter. Daylight comes later and darkness falls sooner, pushing crops to ripen and quickening my footsteps for the final rush of harvest. There is a breathless sense of waiting, hanging in the balance until the big push begins. As always, much love and great success to you on your journey!

One thought on “O’Neill: Farming as a symphony (column)”