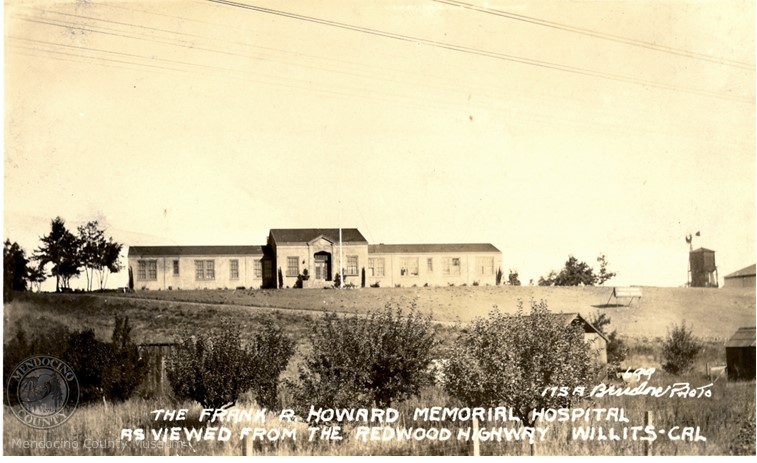 MENDOCINO Co., 9/6/22 — After Willits’ hospital facilities were moved to a location, there have been years of debate about whether there would be new life in the old Frank R. Howard Memorial Hospital building, which is now planned for demolition. To honor the history of the building, and to give community members a chance to share their memories, the Mendocino County Museum in Willits is holding a “pop-up” exhibit featuring the building through the month of September.

Visitors are invited to share their memories of the old hospital, which was first opened in 1928 after a tragic accident that killed 15 year old Frank R. Howard. These memories can be contributed to the museum display so they can be shared with the larger community.

Here’s the announcement from the museum:

Through the month of September, Mendocino County Museum will have a small pop-up display  honoring the old Howard Memorial Hospital (1928-2015).

Out of tragedy, came a Willits icon. The Frank R. Howard Memorial Hospital came into fruition  after the untimely death of its namesake.

After an automotive accident, and lack of a ‘real’ hospital in the area, 15-year-old Frank R.  Howard passed away due to his injuries in 1926. This led his father, Charles S. Howard, owner  of Seabiscuit, to donate $30,000 (~$510,000 in today’s money) to begin construction on the  hospital, with a donation from Dr. Raymond Babcock of $42,000 (~$715,000), and others in the community following. In 1927, groundbreaking began and by 1928 the first patient was admitted. Frank R. Howard Memorial Hospital kept expanding, eventually growing out of its walls,  requiring a new building to be constructed to continue providing services to the area. Now that  the old building is slated for demolishing, we at the Mendocino County Museum want to add our  respects to the history, the workers, the patients, and the legacy of the Frank R. Howard  Memorial Hospital.

We invite audiences to visit our pop-up display and share their own fond memories of Frank R.  Howard Memorial Hospital. Were you born there? Or know someone who was? Worked there?

Write a little note about your memories on our provided notepads and add it to the display, so  we as a community can stand together and fondly remember this fallen icon.

Photograph postcard of hospital around 1928.

For more information, please contact the Mendocino County Museum at 707-459-2736 or  [email protected]