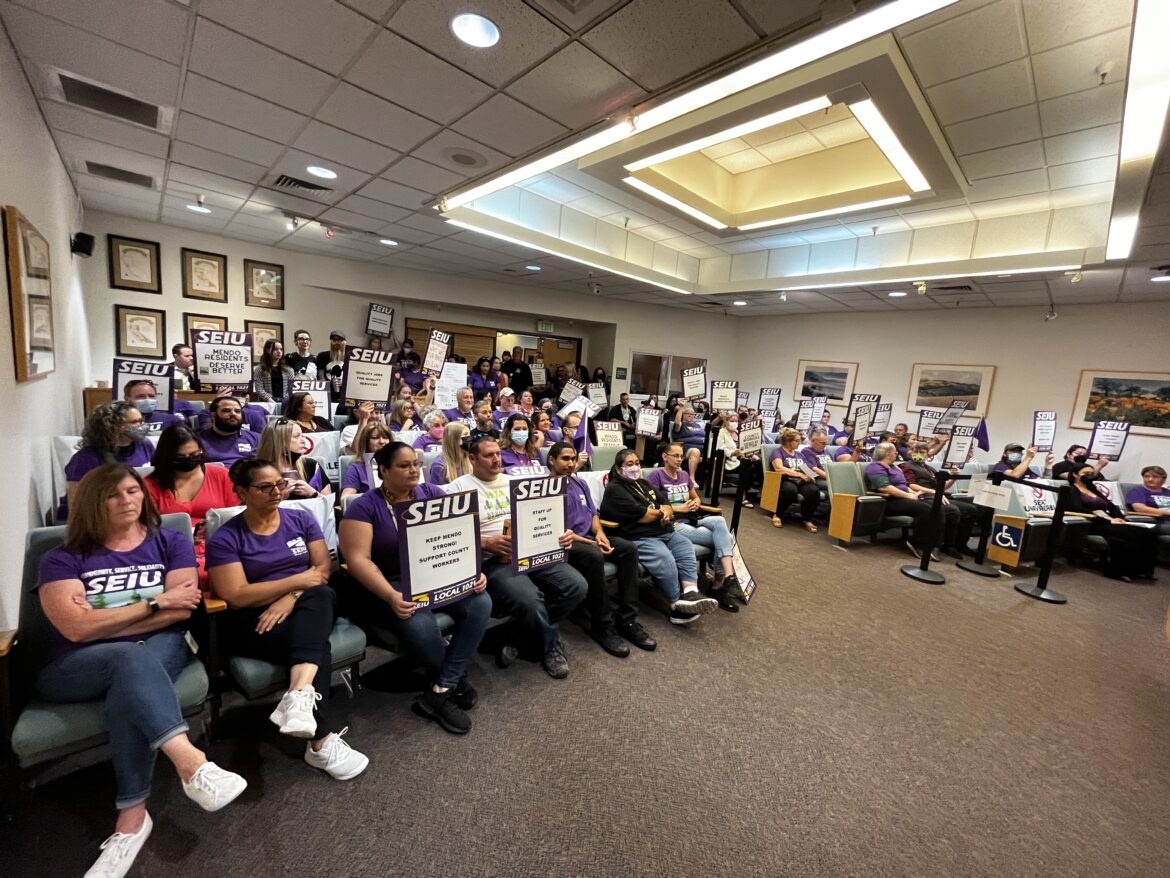 Service Employees International Union Local 1021 members rally for the second time at the Aug. 16 Board of Supervisors meeting.

MENDOCINO Co., 9/2/22 — About 120 members of the Service Employees International Union Local 1021 rallied at the August 16 Board of Supervisors meeting for the second time since the union’s contract with the county expired on June 30.

The union representing county workers is urging the county to implement a 5% cost of living increase for its employees to combat the highest inflation in 40 years and to keep employees from leaving Mendocino County for higher-paying jobs. At the meeting, SEIU 1021 President Julie Beardsley said the county and Renne Public Law Group, a San Francisco-based law firm the county hired to represent it, told labor negotiators there is no money to raise wages.

“We’re told that we should suck it up and tighten our belts because it’s so cheap to live in Mendocino County,” Beardsley said during the meeting. “While we have suggested several solutions to affording a modest 5% cost of living adjustment in time of 9% inflation, the county hasn’t brought forth a single recommendation or idea of how to support employees or increase recruitment.”

SEIU 1021 has been asking the county to identify sources of revenue within the existing budget to direct toward raising salaries. The union has frequently pointed to vacant positions in the county that are paid for with the county’s general fund, money not earmarked for specific departments or programs, Patrick Hickey, an SEIU Local 1021 representative, told The Voice.

But Board of Supervisors Chair Ted Williams said a supposed general fund surplus from unfilled positions will not solve the problem.

“I agree with [the union workers], the amount they’re getting paid is despicable…But if we did have that [general fund] money there would be a surplus in our revenue each year,” Williams said. “There’s a theory that the CEO is hiding money we actually have for negotiation purposes. I don’t think that’s the case, I think we don’t have enough money.”

Some unfilled positions are budgeted using general funds, but about 63% of those positions were vacated less than five months ago, Deputy CEO Cherie Johnson told The Voice in an email. Because the county’s auditor-controller creates salary and budget projections usually after the first payroll in March for the next fiscal year’s budget, any position vacated between March and June is still considered budgeted, Johnson said.

Oftentimes, funding for these positions is used to offset overtime costs and temporary help needed to fulfill duties in departments that lack enough staff, she added.

Hickey said four attorneys from the firm were present in negotiation meetings, something that hadn’t happened in prior meetings or negotiations. Attorney Jonathan Holtzman, who is listed as a labor negotiator in a Board of Supervisors’ agenda item, makes $395 per hour negotiating for the county, according to the contract.

Contract negotiations started in April and have been ongoing since. Hickey said SEIU and the county are still not close to reaching an agreement.