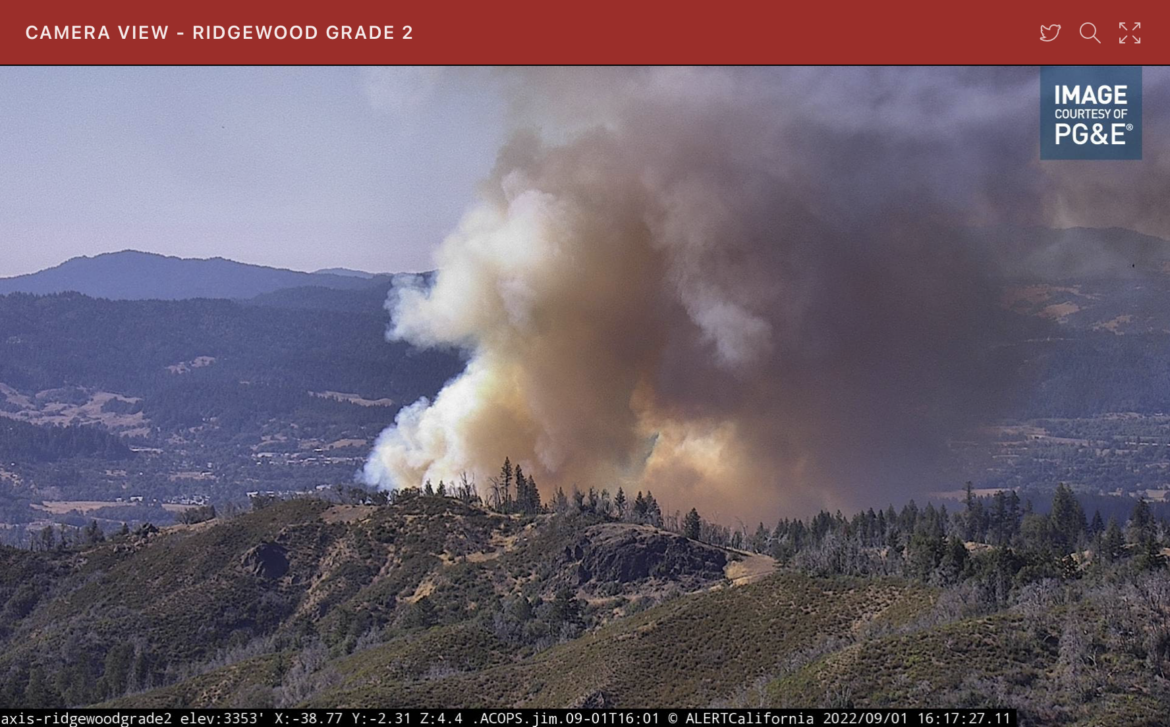 UPDATE 9/2/22 9:45 p.m.: Cal Fire’s evening report for the Walker Fire notes that containment has grown to 45%, and includes a listing of two firefighter injuries. There are 99 personnel on the scene continuing to increase containment, clear hazardous trees, and mop up.

During a mid-day incident video, Incident Commander Drew Rhoads reported that the fire had died down significantly, although crews were still working on a few spots outside of the lines. Cal Fire also shared photos of the damage that occurred on Highway 101, although all lanes have since been re-opened by Caltrans.

UPDATE 9/2/22 7:45 a.m.: The Walker Fire is 25% contained as of this morning, according to CalFire’s most recent incident report, and there are 108 personnel on the fire mopping up and building containment line. One of the northbound lanes of Highway 101 may remain closed to allow fire crews to access the scene. Here’s the full morning report.

UPDATE 9:10 p.m.: The Mendocino County Sheriff’s Office (MCSO) has downgraded the evacuation warnings to “situational awareness” for the Pine Mountain and Ridgewood Road subdivisions, which means residents of the area should maintain awareness, but the level of emergency and likelihood of evacuation has decreased.

Cal Fire typically issues updates on major incidents twice daily, so the next update on the acreage and official numbers of personnel and other details of the fire are likely to be available around 7 a.m. on Friday, September 2.

UPDATE 7:30 p.m.: Cal Fire has released the evening update for the Walker Fire, which can be found here.

UPDATE 6:35 p.m.: Forward progress has been stopped on the Walker Fire, which is at approximately 109 acres, according to scanner traffic.

UPDATE 6:05 p.m.: Cal Fire has released its initial incident report for the Walker Fire, which puts the blaze at approximately 100 acres in size. Fire crews on the scene are reporting that “it’s looking pretty good,” and the fire remains at a moderate rate of spread.

One northbound lane of U.S. Highway 101 remains closed, as does Ridgewood Road at Eastside Road in Willits, and traffic in the vicinity of Pine Mountain and on 101 between Willits and Ukiah may be impacted.

According to the Cal Fire report, there are four structures threatened, and 176 personnel on the scene, including 14 engines, two helicopters, four water tenders, and three dozers.

UPDATE 5:45 p.m.: Forward progress has “slowed” on the Walker Fire, and crews are making headway with retardant lines thanks to an ongoing air response, according to recent scanner traffic, while working on a few remaining spots. The most recent unofficial estimate is that the fire is approximately 100 acres in size.

UPDATE 4:50 p.m.: The fire has reached approximately 20 acres in size, according to the latest update from Cal Fire’s Mendocino unit. The Sheriff’s Office has reiterated on social media that additional road closures may go into place to ensure emergency responders can access the fire.

UPDATE 4:40 p.m.: Emergency responders are working to deactivated power and distribution lines in the vicinity of the fire to reduce additional fire risks, and one firefighter may be injured, according to scanner traffic. Additional road closures may also go into place, including routes into the Pine Mountain area, where there is currently an evacuation warning in place.

Please avoid the area if possible to ensure emergency responders can access the fire. Earlier updates are included below. Emergency updates from Mendocino County such as road closures and evacuations will be updated on Nixle, social media, and at mendoready.org.

UPDATE 4:30 p.m.: Some lanes and portions of Highway 101 south of Willits may be closed for several miles to allow emergency vehicles to respond to the Walker Fire — please avoid the area if necessary. Additional air resources are also en route to assist the current air response — you can follow along at Flightradar24.

UPDATE 4:15 p.m.: An evacuation warning has been issued for the Pine Mountain subdivision and Ridgewood Road subdisions, according to scanner traffic, which means residents should be prepared to leave if conditions worsen or they feel unsafe. The fire is approximately 15 acres and structures are threatened; an air response is currently underway. The Sheriff’s Office is issuing alerts via Nixle, social media, and at mendoready.org.

Evacuation Warning: Wildfire in the WILLITS area, PINE MOUNTAIN AND RIDEWOOD SUB-DIVISION, Be ready to evacuate at any moment, gather your belongings, check on your neighbors and leave early if possible. Please avoid the area, Emergency crews need access, DO NOT BLOCK THE ROAD. Only call 9 1 1 for emergencies. We will publish more information including evacuation zone maps and social media updates to mendoready.org as more information becomes available.

Smoke may be visible from a distance and can also be seen on a number of cameras on the alertwildfire.org camera network.

MENDOCINO Co., 9/1/22 — Fire crews are on the scene of a wildfire, called the “Walker Fire,” in the Willits vicinity. The fire is near the Willits grade, south of Willits in the vicinity of Black Bart Drive, between the south bypass and Howard Forest Station on Highway 101.

The fire is reported to be 15 acres and growing at a moderate rate of spread; structures and the Willits water treatment plant are threatened, according to scanner traffic.

The Mendocino County Sheriff’s Office has issued a Nixle alert asking for situational awareness. Please avoid the area if necessary; traffic in the vicinity may be impacted and emergency vehicles are trying to access the scene.

Situational Awareness: Wildfire in the WILLITS area, near WILLITS GRADE NEAR BLACK BART DR, No further action needed at this time, Use caution and avoid the area. We will publish updates to mendoready.org as more information becomes available.