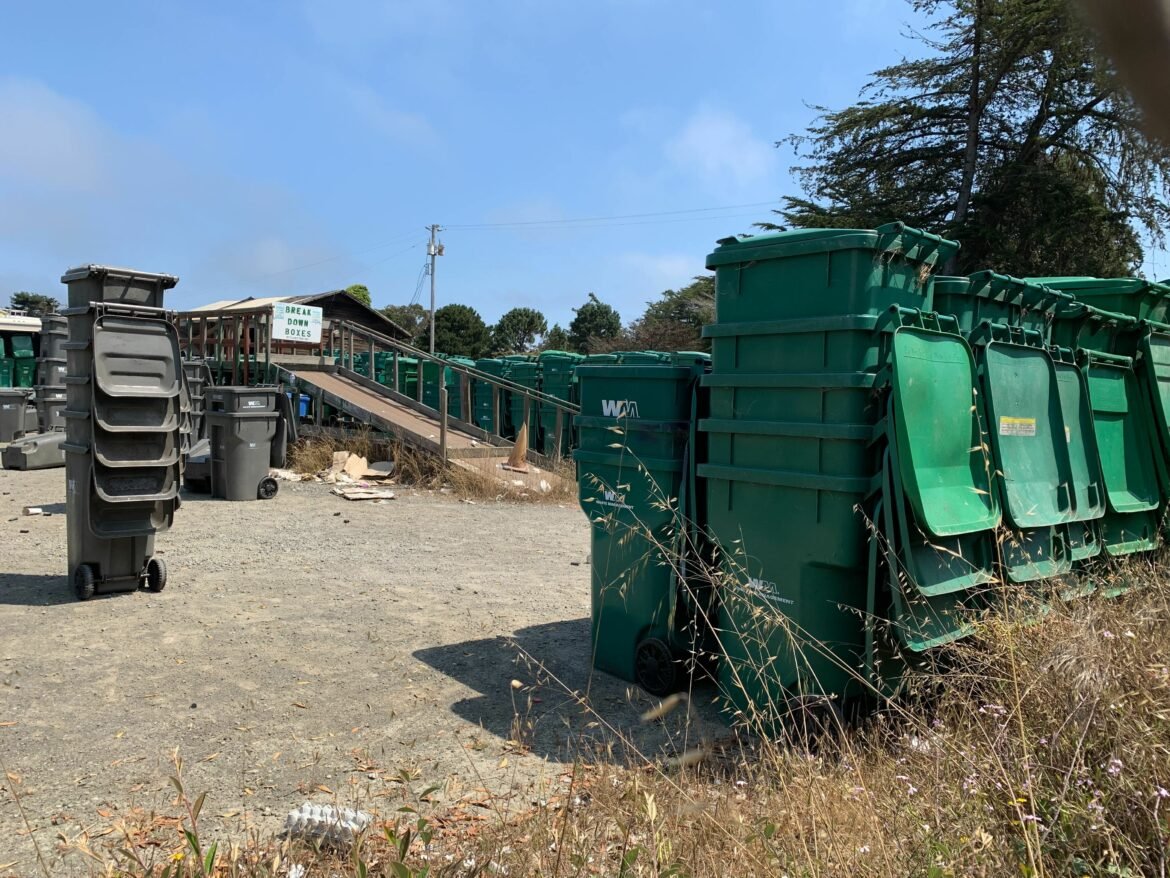 A sea of trash and recycling bins at the former Pudding Creek Transfer Station in August, 2022.

On Monday, ContainerPros and WM will assess how many bins have been collected and determine whether a third collection period is needed. If one is, that will take place in mid-August, Rosynsky said. He could not provide the number of bins that have been collected thus far by the time of publication.

“It has not been a completely smooth transition, but we’ll get through it,” Ted Williams, chair of the Mendocino County Board of Supervisors, told The Voice in an email.

“This issue was resolved quickly, and we were able to retrieve our carts to return them to our customers,” she said. “There have not been any reported instances of this occurring on the coast that we are aware of currently.”

MENDOCINO COUNTY, CA, 7/29/22 – Parts of Mendocino County have been stricken with doubled-up waste bins, while others have lost or risk losing beloved recycling centers.

“This is not a recycling center,” Recology representative Fred Stemmler said. “It is a garbage dump.”

Ongoing contamination issues from “a few bad actors” disposing of waste materials in the recycling bins have rendered much of the recycling collected there unusable, he outlined.

“These recycle centers predated curbside collection for the most part in the communities that I’ve seen,” Stemmler said, pointing to the argument for closure. “The service has evolved.”

Paul Andersen, Point Arena’s city manager, opposes closure of the center and offered suggestions to mitigate the issue. These included that Point Arena limit the center’s open hours, hire an attendant to monitor incoming materials, and post educational information outlining what can and can’t be recycled.

Though residents can receive recycling pickup with their waste pickup from their home at no extra charge, many who don’t get trash or recycling picked up from their home rely on the recycling center, as Councilmember Anna Dobbins pointed out. According to the report, the South Coast Transfer Station on Fish Rock Road would be the nearest facility should this one close.

“I think it’s really important for us to maintain the access and the ability to have this service,” she said.

Ultimately, the council determined that Dobbins and fellow councilmember Richey Wasserman will head up an ad hoc committee exploring solutions for the recycling center.

“You’re clearly involved and participating in this meeting, and I look forward to you getting together and hearing back,” Chair Scott Ignacio said.

The city of Fort Bragg and Mendocino County’s unincorporated areas serviced by Waste Management have transitioned out of their contracts with the hauler as of June 30; many were concerned over doubled-up trash and recycling bins from the new haulers, as Waste Management presented a two-week timeline in July to pick up its old bins.

The goal was picking up all bins by July 22, but some were still on the streets in Fort Bragg – along with the new C&S Waste Solutions bins – at the end of July. The Mendocino Voice could not reach Waste Management or Fort Bragg Public works for an updated pickup timeline at the time of publication.

WM’s Disposal and Buy Back Center on Pudding Creek Road – which purchased recyclable materials like aluminum cans and plastic bottles – is also now closed, but has turned into a graveyard for collected bins. Coastal residents who want to claim California redemption value for bottles and cans must drive to Willits, a change that provoked considerable outrage on Facebook.

According to a message on Twitter from Williams, C&S Waste Solutions is hoping to replace it. Williams said the company is searching for a land-use compatible location to build another North Coast buy back center, and that state approval would take 90 days when a site is identified.

“Opposition could delay,” he wrote. “Your guess is as good as mine.”

After years of debate over the location of the Central Coast Transfer Station, many options are still in play and several others have been ruled out, following further site assessments along Highway 20 requested in May.

Tom Z. Varga wrote in a staff report to the Joint Coordinating Committee that acquisition costs and environmental factors have changed significantly in the past 15 years, since work on finding a new site began.

“Staff’s previous estimate of $200,000 to directly acquire an undeveloped, five-acre site with no marketable timber may now be low,” he wrote. “Second, transitional pygmy forest habitat has become much more controversial and development in this area can be expected to meet much stronger environmental concerns.”

The staff report said the most optimal sites are a land parcel at Jackson Demonstration State Forest and the existing transfer station site, with no “obvious, new candidates” for an alternate site. But committee members do not favor these sites, according to committee member and chair of Mendocino County Board of Supervisors Ted Williams. Selecting a site may be a challenge, as evidenced by years of debate on the subject.

“There are more state and federal mandates than dollars,” Williams told The Mendocino Voice following the committee’s meeting Thursday.

Share other trashy situations going on in the county with [email protected], and stay tuned for more in-depth stories on waste management in Mendocino County.

Update Aug. 1, 10 a.m.: An earlier version of this article incorrectly stated that the committee preferred land parcels at JDSF and the existing transfer station site. The Mendocino Voice regrets the error.