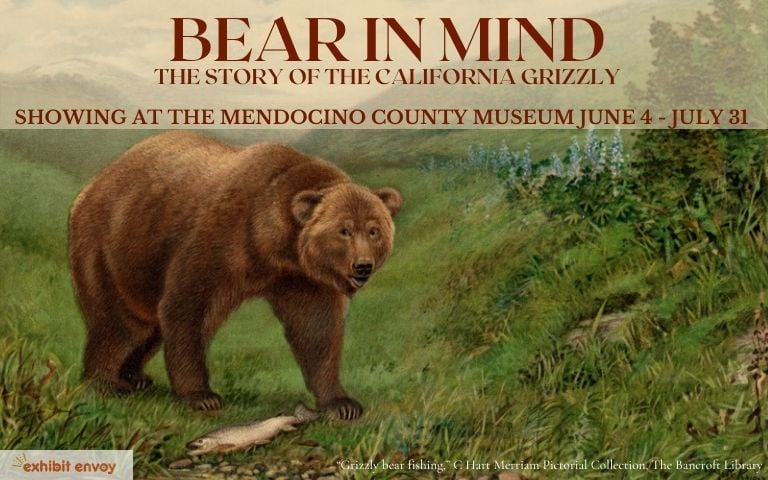 Bear in Mind the Story of the California Grizzly

MENDOCINO Co., 5/16/22 — The iconic California Grizzly is the subject of a new traveling exhibition opening at the Mendocino County Museum in Willits next month, developed with input from The Bancroft Library, University of  California, Berkeley, and Heyday Books.

The exhibit will be opening June 4 and be on display until July 31, 2022 at 400 E. Commercial St. in Willits. More information about the show and other programs at the museum can be found on their website or by calling 707-459-2736.

Here’s the announcement from the museum:

Over the centuries, the relationship that Californians have had with the grizzly bear is one of  dualities expressed in fear and fascination. Although now extinct in the state, the grizzly has  long been a central character in California’s history. Illuminating the story of the grizzly is the  exhibition “Bear in Mind: The Story of the California Grizzly,” which opens at the Mendocino County Museum on Saturday, June 4, 2022.

The California grizzly possessed characteristics that we hold dear: independence, adaptability,  resourcefulness, intelligence, and strong maternal care. Yet human interaction with the bears  was misguided, intolerant, and violent.

Scientists estimate that 10,000 grizzlies once lived in California, perhaps the densest population  of brown bears on the continent. However, through increased human settlement, loss of habitat,  and hunting, by the early 1900s the California grizzly had vanished and could only be seen on  the state flag. Although the loss of the California grizzly was a tragic lesson, we are not too late  to save other threatened and endangered species.

Today, California grizzly bears only exist in our imaginations as symbols of things desired and  things lost. Since the mid1800s, the grizzly has been used as an icon, advertiser, and  entertainer, making the image of the bear a familiar one to most people. Little physical evidence  remains of the grizzly bears that once roamed California. It is through stories, artifacts, striking  images, and the hands on activities that the “Bear in Mind” exhibition provides, that we can take  an in-depth look at the history and science of California’s most revered and feared animals.

Currently scheduled for installation at more than 17 museums across the state over the next  three years, “Bear in Mind” will continue at the Mendocino County Museum through Sunday,  July 31, 2022.

The “Bear in Mind: The Story of the California Grizzly” exhibition is produced and toured by Exhibit Envoy. The exhibition was developed in concert with The Bancroft Library, University of  California, Berkeley, and Heyday Books. Exhibit Envoy collaborates with California institutions  to create and tour smaller, affordable, high quality exhibitions that enhance civic engagement  and human understanding. This exhibition was supported by the William Randolph Hearst  Foundation with additional funds from the Bank of the West.