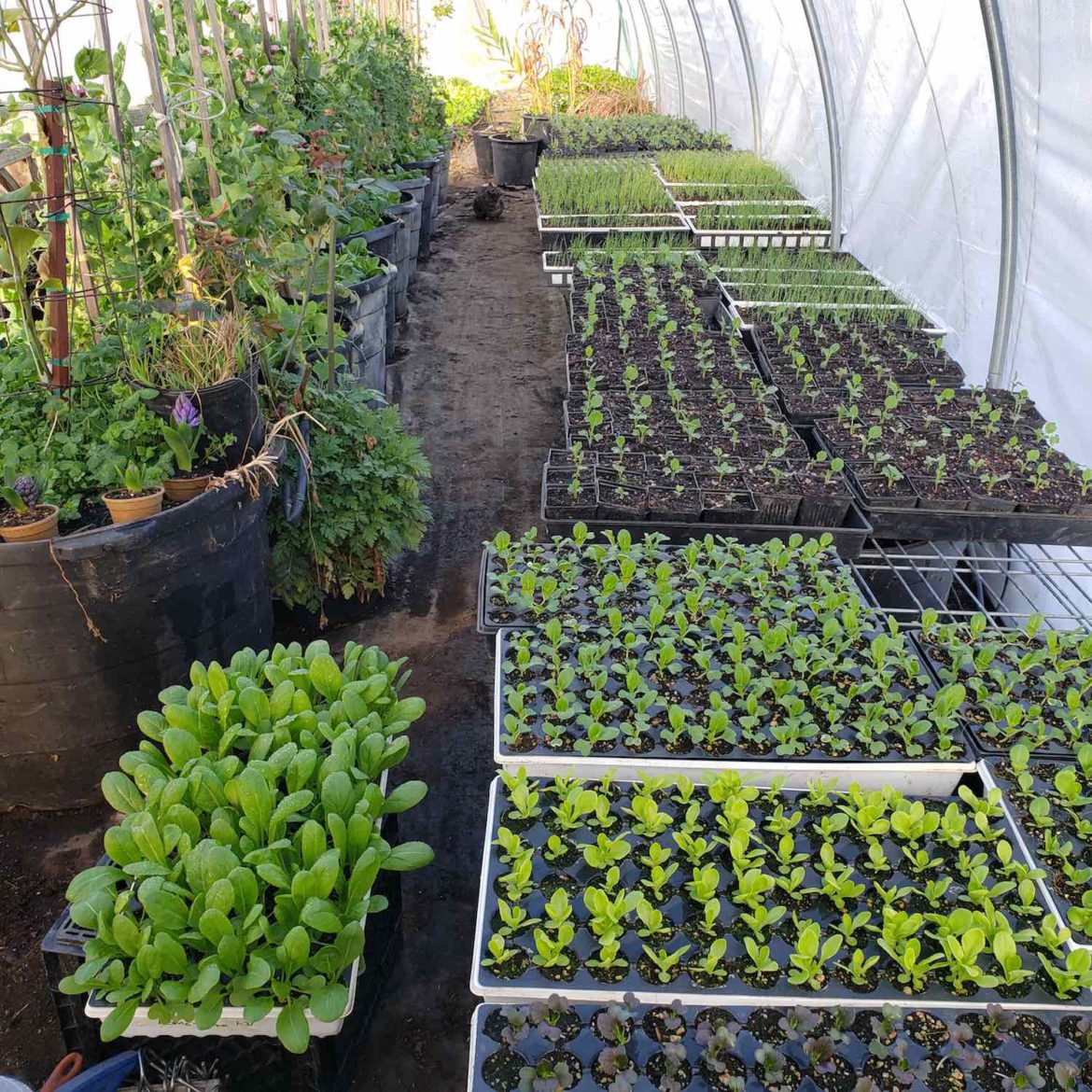 At least now when it is warm and sunny we can say “feels like spring”, instead of “my what an unseasonably warm winter this is”. I am hoping on more good rain over the next few days, while also irrigating the crops that have gone in the ground. This week we planted onions and shallots, bringing our storage crop plantings up to full speed.

Potatoes are just beginning to pop up their green leaves in a few places, and with the alliums in the ground we’ve almost filled out one of the garden spaces. It feels good to progress with the planting, though the uncertainty about water is beginning to hedge in again.

Last year the water stress was worse than any in my time as a farmer, and without significant rains in April and May, this year looks to be worse. Our irrigation pond is already down a foot, in small part because of pumping but mostly due to evaporation from the warm, dry, breezy days. With this in mind, bulking up the early harvest storage crops like onions, shallots and potatoes makes sense; they will be out of the ground and off irrigation sooner than longer season crops, allowing us to decide at that point if we have enough water to replant or not.

With the drought last year we were unable to replant beds when spring crops came out, fallowing a dozen rows that would normally have been planted to summer crops or fall brassica. This left us with few offerings available during fall, and we shut down the CSA and farmers market table early. The rains arrived in fall and we were able to plant an abundant winter crop, which has worked out very well, but now we are staring down the potential of another hard water year.

We are scaling back on our cannabis planting due to the market crash, which allows for more bed space for spring crops and will mean a bit more water available for other things during the summer. Tomatoes are always a big summer crop for us, sales are strong at markets and we preserve and can abundant amounts of them for sauces, salsas and other tomato products for sale at the farmstand. Last year we grew almost 3000 pounds of tomatoes, mostly the Cour Di Bue heirlooms from the two hoophouse rows and the Heinz sauce tomatoes.

In addition to the work of prepping beds and planting spring crops, we welcomed our first batch of meat birds, and 40 new laying hen chicks onto the farm this week. After more than a decade, working with poultry has become pretty routine, part of a repeated process that I know well. Fresh straw in the brooder, heat mats for warmth, scrub out the waterers and fill the feeders.

We also got three lambs this week, which is the first time I’ve tried working with ruminants. All was well for the first couple days, they were kept in a small pen and moved a few times a day to fresh forage. Then we tried to let them out into a larger enclosure surrounded by electric fencing, and all hell broke loose. The first one to touch the electric jumped forward into it instead of backing away from it, and all three broke through and ran up the hill and onto the county road.

Sheep can cover ground pretty fast when the want to, and within a few minutes they were halfway up the road to the old ranch a few parcels over. One of our friends had just arrived with the intention of working with Amber on our website, when she found herself pressed into service driving the pickup to help us chase the sheep.

After several mad dashes back and forth across open range, sprinting to cut them off when they angled the wrong way, we managed to get them into the fencing at the ranch. Things seemed like they had settled down, and we gave them space hoping they would come to the barn at dusk and we could pen them up for the night. Alas, this was not to be the case, as they escaped from the ranch and were spotted on a neighbor’s driveway to the North.

We spent the next day working to corral them, with great frustration and much feelings of failure on my part. It has helped that a number of folks in the community have shared their stories of chasing escaped sheep, but it has still been hard to accept the feelings of inadequacy that have come from this new attempted endeavor.

I remind myself that any new journey in farming will have failures and learning experiences, but I have never felt so unprepared as I did when I watched those sheep go right through the electric and sprint up to the main road. I realize now why sheep ranchers always had working dogs and appropriate infrastructure for containing them, and it is clear to me that if this is a route I want to pursue, I have much more to learn and much work to do.

Overall, it has been a humbling few days, with lessons around methodology and hubris that have been a rollercoaster. This has caused me to question myself in uncomfortable ways, and to feel frustration that has added to the stress of the season at a time when I did not expect it and had little emotional bandwidth available to deal with it. I am glad for a moment of reflection, for a steadying of my psyche to continue the process. As always, much love and great success to you on your journey!