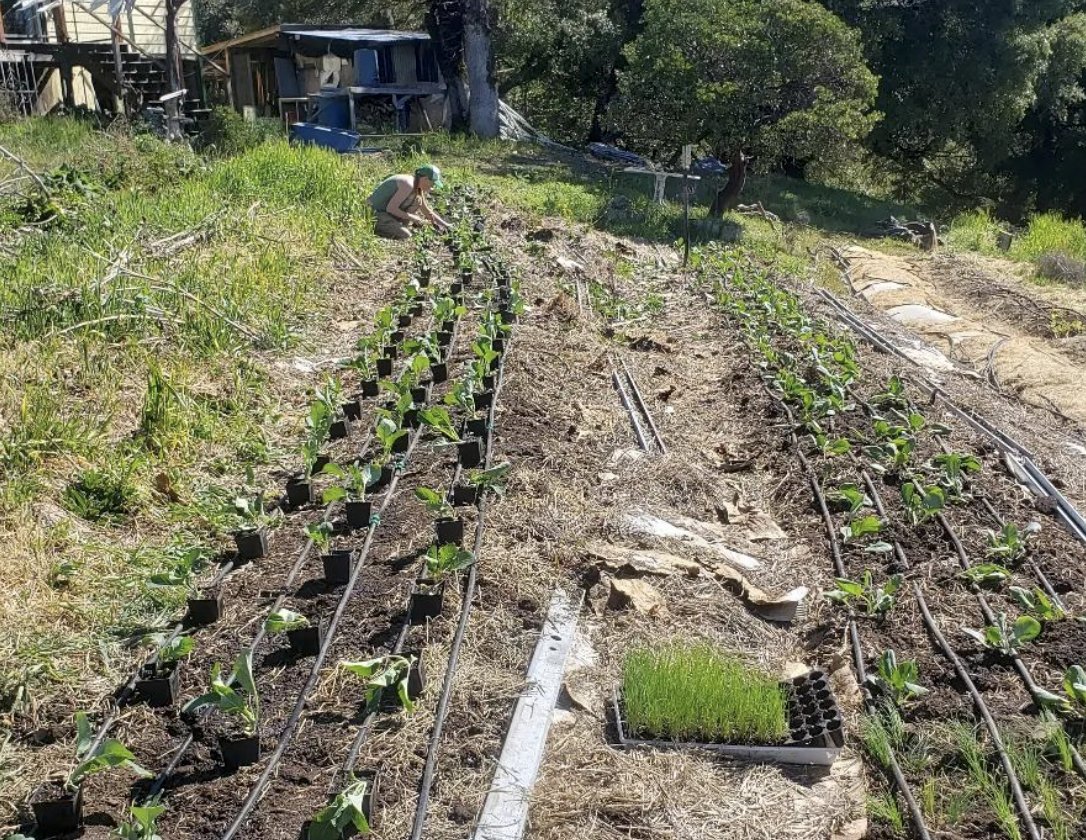 Spring planting at HappyDay Farms, by permission from their Instagram page.

I awoke to the sweetness of a soft and gentle rain falling on the roof. It’s amazing how much significance rain has taken on in these days of drought, something that I once took for granted now treasured and rejoiced upon its arrival. The rain brings a softening inside me, transforming a place grown hard and brittle into a place of abundance and happiness.

It wasn’t always like this for me, there was a time when I didn’t like cloudy days, feeling sadness and missing the sun. I’m still much bouncier on sunny days, but I’ve come to respect and appreciate wet days in a way that had never happened before. The long dry spell this winter was unlike anything I have ever encountered, and I feel changed by it.

I am no stranger to a good chunk of warm, sunny weather during the winter, but when most of the winter is such, it takes on a different feeling. A sense of urgency presses upon me, a feeling of being behind in my work. As March creeps along, I’m reminding myself that any journey, and especially that of farming must be done a step at a time.

I’ve been feeling overwhelmed by the many threads in life of late, having a hard time balancing everything and feeling like there is too much to do. In retrospect, I think a lot of it had to do with the lack of rainfall and the feeling that the season was moving along much too fast. Though we still need lots more rain, just getting this little series of storms has slowed things down some.

Shutting off the irrigation has been helpful, one less thing to think about in a time of year when I would not usually be thinking about it much at all yet. Bed prep and weed pulling are much easier when the soil is soft, unlike the hardened surfaces that I encountered throughout the end of February.

This is a year of changing methodologies for us on the farm. We are starting cannabis seeds a month later than usual, and will be getting clones later as well. This takes the pressure off of spring prep, so that instead of having to do several marathon days of bed prep, I’m plugging away at a more measured pace, working to prep 3-5 beds each week as crops edge towards readiness in their trays in the hoophouse.

The slower start gives the cover crop more time to grow, and also takes some of the pressure off of us in a year without extra labor to help with a big spring push. After months of being on the list, we got shallions and green garlic in yesterday. I had hoped to plant them earlier in the winter for an earlier spring harvest, but they will still provide flavor and variety for market sometime in the early summer.

Shallions are fun because they are the sprouted shallots leftover from last year that would otherwise go to waste. I plant the bulbs with the green tops sticking upwards, and in a couple months they will be harvestable as bunching shallots, similar to green onions. Green garlic is much the same, making use of sprouted heads to become future flavor instead of going to the compost pile.

We’ve been harvesting the big, winter brassica from the hoophouses, which has been crucial to fill our market table and CSA, and is also now freeing up space for the next plantings. More beets, bok choy, salad mixes, turnips and radishes are going in, marching out through the shifting kaleidoscope of crop patterns that make up our winter rotations.

The big brassica were a late gamble to fill up planting space after the fall harvest. We didn’t have anything else available to plant, and were too burnt out to be able to do anything more than pop in some starts and see if they would do their thing. Overall, the large brassica are better suited to life outside the hoophouse, while quick rotation crops are more effective at maximizing the high-value space in such sheltered locations. There have been some problems with rotting in the denser-headed cauliflowers and romanescos, and the cabbages have been super slow to head up.

As a result of the experiment, we’re making plans for low tunnels to do a similar thing for next winter, being able to shelter the brassica for cold snaps by dropping the plastic over them, but avoiding the lack of air movement and overheating that happened during the hot, dry periods of this winter. Shifting them to the big terraces down below will allow us to make better use of the winter hoophouses in what is becoming a strong offering for winter markets and CSA.

It’s always tricky to balance winter farming with burnout, and we’re also trying to have the conversations about self-care, and about not pushing so hard during each different season so that we maintain some reserves of energy. We learn and grow as time passes, and on this rainy morning, I take a moment to treasure the ride. As always, much love and great success to you on your journey!