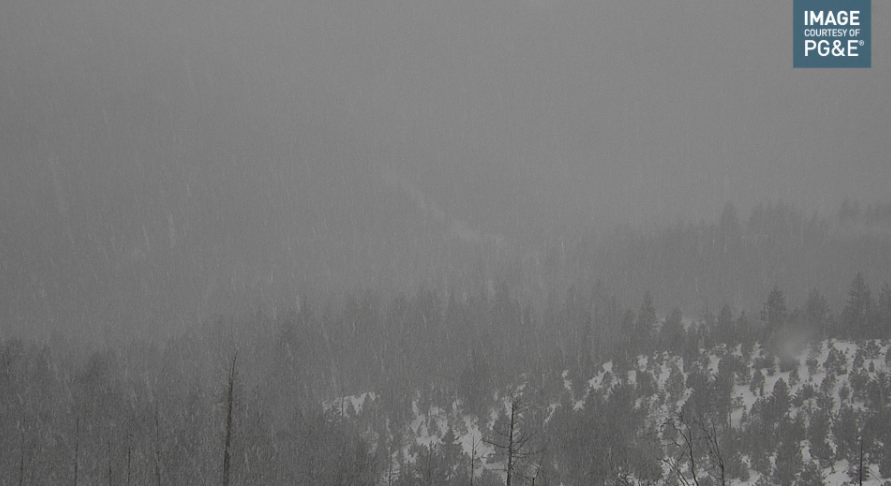 An image of the region's first snows Tweeted by the National Weather Service in Eureka.

MENDOCINO Co., 12/21/21 — Another round of wintry weather began hitting Northern California today, with snow levels dropping to 2,000 feet or below in current forecasts — which may impact people planning to travel ahead of the holiday weekend. As of today, the start of astronomical winter and the winter solstice, the National Weather Service (NWS) in Eureka is forecasting precipitation across the North Coast and much of the state lasting through the weekend, with snow at higher elevations possible in some inland portions of Mendocino.

Conditions may vary widely across North Coast microclimates, and on your travel routes, so we’ve included a list of useful resources to keep you updated at the bottom of this article. You can check for the specific forecast for your neighborhood and on current road conditions as they develop.

As of Tuesday afternoon, there are winter storm warnings and winter weather advisories in effect for mountainous portions of the interior North Coast, and NWS Eureka is warning of potential dangerous travel conditions on State Routes 299, 199, 36, and 3.

The current winter weather is forecast to continue through the weekend, and the upcoming precipitation is forecast to have the greatest travel impacts Friday and Saturday, when snow levels may drop to 2,000 feet, particularly in Humboldt and Trinity counties. Drivers should expect possible chain controls or road closures, especially over mountain passes in Northern California. Significant snowfall is also forecast for the Sierra, which could see multiple feet of snow and whiteout conditions over the weekend.

Next week, however, there is a chance for a more significant weather event to bring freezing temperatures and snow below 1,000 feet in parts of Northern California and the Pacific Northwest, according to current forecasts. Daniel Swain, meteorologist and author of “Weather West,” notes in his most recent post that there’s a possibility of snow levels dropping to below 1,000 feet elevation next week, which could mean snow in the North Bay mountains and flakes on Humboldt’s beaches, as well as significant snow fall in the Pacific Northwest and along Interstate 5. Swain writes:

If the atmosphere plays its cards right, there is a potential for some very low snow levels in NorCal early next week (in addition to the possibility of widespread, disruptive sea level snow in the Pacific Northwest). At face value, the operational models are hinting at a scenario that could potentially drop snow levels below 1,000 feet across the northern third of the state–perhaps well below… Additionally, very cold mid-level temperatures may even be supportive of snow levels falling to around sea level along the North Coast during heavier convective showers–so it’s even possible that the beaches near Eureka/Arcata could see some snowflakes next week. Places along the Hwy 101 corridor as far south as Mendocino or even far northern Sonoma County (and eastward into Lake County at elevations 500-1000 ft) could potentially see accumulating snowfall too.

We recommend you check out the entire article here, and in general follow Swain’s excellent analysis of our region’s weather patterns. We’ll keep you updated as the forecast develops.