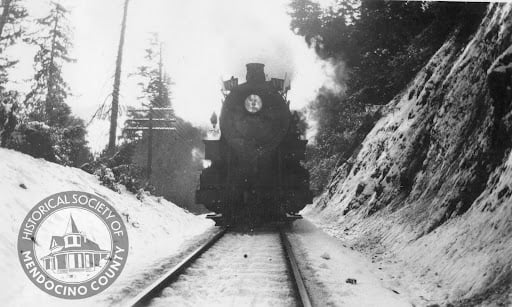 OIL TO BE BURNED ON LOCOMOTIVE — The Mendocino Beacon. December 10, 1921

The Albion Lumber Company now have locomotive No. 202 full equipped for a burning oil, and she made her trial trip to Navarro Thursday, making the round-trip in about eight hours. This will do away with the extra time taken up on the road and handling the large amount of wood consumed by a machine of the size.

Fort Bragg, Dec. 9 – The City Board of Trustees have issued a proclamation calling the attention of the public to the fact that the government has begun a campaign to locate disabled veterans of the world war with the purpose of aiding them and securing an early settlement of their claims, and the city board has designated Wednesday next, December 14, as Disabled Veterans Day and asks all citizens to cooperate to the end that such veterans will be brought in touch with the government squad which will arrive at Fort Bragg on the day for the express purpose of meeting and aiding these soldiers.

MENDOCINO – A case of smallpox developed this week when Al Smith, who has been working at Glenn Blair, came down with the malady. He is at the Fred Dodge home which is under quarantine.

UKIAH – The question of whether or not the town of Ukiah should buy the water plant of the Ukiah Water & Improvement Co. was voted on December 8 and carried by a good majority. This will authorize the bonding of the town for something like $64,000 to purchase the plant and provide a reserve fund to meet any needs that might arise while the plant is being gotten underway.

Albion, Dec. 30 – Old and young alike enjoyed themselves at the community Christmas tree held in the A. A. A. hall on the evening of December 23. The teachers of our local schools had prepared an appropriate program to be put on by the pupils which was followed by the appearance of Santa Claus and the distribution of candies, nuts and oranges to all the children.

Why don’t people of Ukiah and vicinity attend the picture shows? My pictures are the best produced; my prices are always lower than the city prices; my music is first class.

I am undoubtedly not pleasing you; tell me why. I want your patronage and I must have it in order to enable me to continue the class of pictures I am now running. Look over this weeks program. I believe they will all please you.

“The affairs of Anatol” ran to capacity business for four weeks in San Francisco. Can you help me fill the house up for two evenings?

“Conrad in Quest of Youth,” coming next Monday, is a special production, starring Thos. Meighan. I don’t believe it was ever run at as low admission as I am charging.

Christmas is coming and as we prepare for our own let us not fail to remember the boys who sacrificed so much and living home and all things deer to give their lives if need be for our country. There are over 200 ex-servicemen in the Mendocino State hospital and the citizens of the community, assisted by the various clubs, Red Cross and other organizations are hoping to present these men with some personal gift or confection and all citizens of the community are urged to help in this worthy cause contributions will be excepted by the newspapers in the Ukiah chapter of the Red Cross.

The local post office force was almost swamped with Xmas packages the latter part of last week. On Saturday the mail clerks told us we had more mouth and Ukiah.

From San Francisco comes a story the officials of the Northwestern Pacific Railroad will probably insist on the new street from the proposed depot site to the city being paved before the railroad company constructs the new depot. Such a policy on the part of the company would not be entirely out of order, but, it is not known definitely whether the demand for a good  street uptown has been made direct to the city authorities, or not.

A paving company would not come in here to do so small and amount of paving as that required by the hard surfacing of Smith Street from the railroad yards to State Street and the solution of the situation would seemingly be to have some other paving done at the same time to induce the paving company to take the Smith Street job.

There is an inclination on the part of many property owners on West Perkins Street to have that thoroughfare paved and it is believed the city trustees are not disinclined that way. West Perkins Street is the main residence street of the city. It is not a wide thoroughfare and would not cost the property owners as much to pave as would a wider street. At the same time all of the property would be enhanced in value.