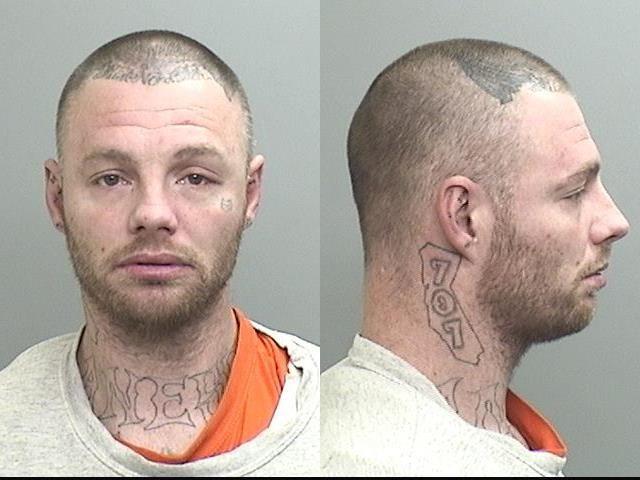 UKIAH, 12/24/21 — A Willits man arrested on suspicion of “arson in a state of insurrection” after a suspicious fire Sunday in Ukiah has been charged with the lesser crime of felony vandalism and pleaded not guilty during his arraignment this Thursday in Mendocino County Superior Court. Around 8:45 a.m. on Dec. 19, Mendocino County Sheriff’s Deputies and firefighters with the Ukiah Valley Fire Authority responded to a mail delivery van burning the 3500 block of North State Street. They found an electric drill with fire damage underneath one of the vehicles, near the gas tank. Two delivery vans, a pickup truck and a utility pole were damaged in the fire.

Steven Ramier, 35, was identified as a suspect when investigators noticed his vehicle near the crime scene in security camera footage. Ramier had a prior conviction for robbery in 2007 as well as two felony cases pending from earlier this year: he was charged with resisting an officer by force or threat in October as well as reckless driving while evading a peace officer and driving on the wrong side of the road while in possession of methamphetamine in April; so his vehicle seemed familiar to law enforcement. Ramier was out on bail when the fires occurred Sunday.

MCSO deputies searched a residence Tuesday in the 35000 block of U.S. Highway 101 in the Willits area, where Ramier was allegedly found hiding inside with significant burns on one hand and subsequently booked into jail. Ramier is being represented by the Mendocino County Public Defender. He is scheduled to return to court for a preliminary hearing before Judge Carly Dolan on Jan. 5, 2022. Meanwhile, he remains in custody on three bonds (one for each felony case) totalling $390,000.