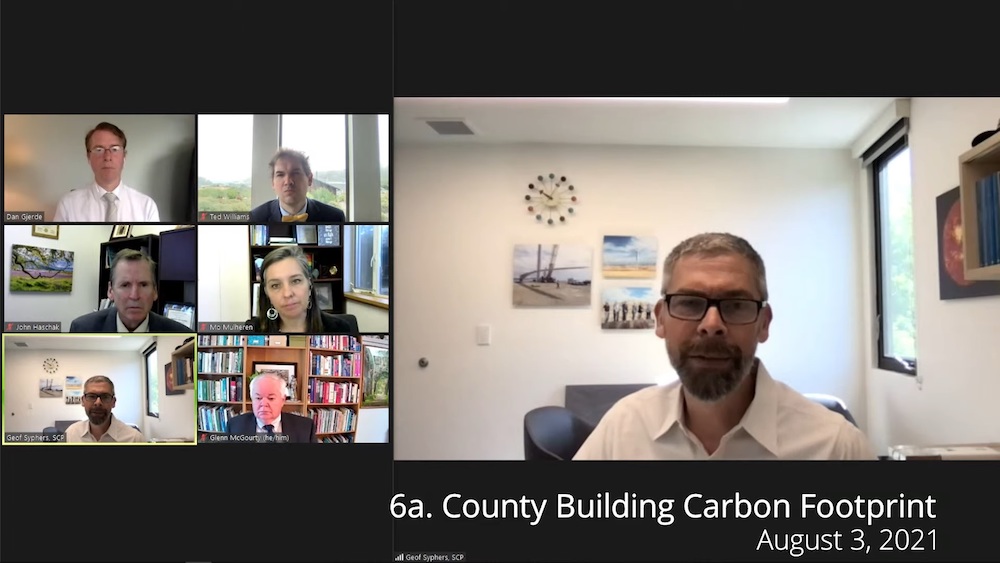 Geof Syphers, CEO of Sonoma Clean Power, (right) explains the benefits of solar power to the Mendocino County Board of Supervisors at its Tuesday morning meeting. The board unanimously approved a resolution that will invest $2 million in projects mitigating the county's carbon emissions. (Screen shot/YouTube)

MENDOCINO Co., 8/4/21 — Mendocino County is on its way to reducing carbon emissions from county buildings and operations. The Board of Supervisors unanimously passed a resolution Tuesday morning that will invest $2 million in carbon emission reduction projects, such as electrifying Mendocino County’s vehicle fleet and simplifying the permitting process for solar systems, and to secure additional funding in the form of grants and low-interest loans to continue those efforts.

“This is a down payment in this time of climate crisis,” said District 3 Supervisor John Haschak. “It’s a down payment on our future and we’ll also recoup the money in not so many years and so I think that it’s a win-win. We need to be doing this for the future of our Earth and also it will be a long-term economic benefit to our county.”

Carbon-reduction projects in the resolution include:

Initially the funding was set to come from money the county received from the American Rescue Plan Act, however, District 4 Supervisor Dan Gjerde said Rep. Jared Huffman’s office clarified those funds could be used for water and wastewater infrastructure but not projects to reduce carbon emissions. The board may earmark part of a $22.65 million disaster settlement from Pacific Gas and Electric for carbon reduction products at a later date.

Proponents of the resolution said installing solar systems on county buildings is both environmentally-friendly and economically wise. The cost of using solar power has dropped precipitously over the years, said CEO of Sonoma Clean Power Geof Syphers, and the drop in utility bills from having county buildings generate their own solar power will cover the cost of installing photovoltaic panels. Buildings can be powered by sunlight during the day and use energy stored by batteries to power them at night.

So while purchasing batteries to accompany the solar systems may seem expensive at first glance, around $30,000 to $50,000, Syphers said it has a high return on investment over five to 10 years. After that point, the county won’t just have covered the cost of the batteries but earned net income from energy production.

Most of the county’s carbon emissions come from transportation so electrifying the county’s fleet of vehicles and installing electric vehicle charging stations present large opportunities for emissions reductions, said Peter McNamee of nonprofit Grassroots Institute, which initially presented the proposal to the county.

“By 2030, we’re going to see a very different world,” McNamee said. “We’re going to see the majority of automobiles on our roads being electric vehicles, and the drivers of those vehicles, when they choose which destinations to go to for their vacations, are going to first look to see whether or not there are an adequate number of chargers in those areas.”