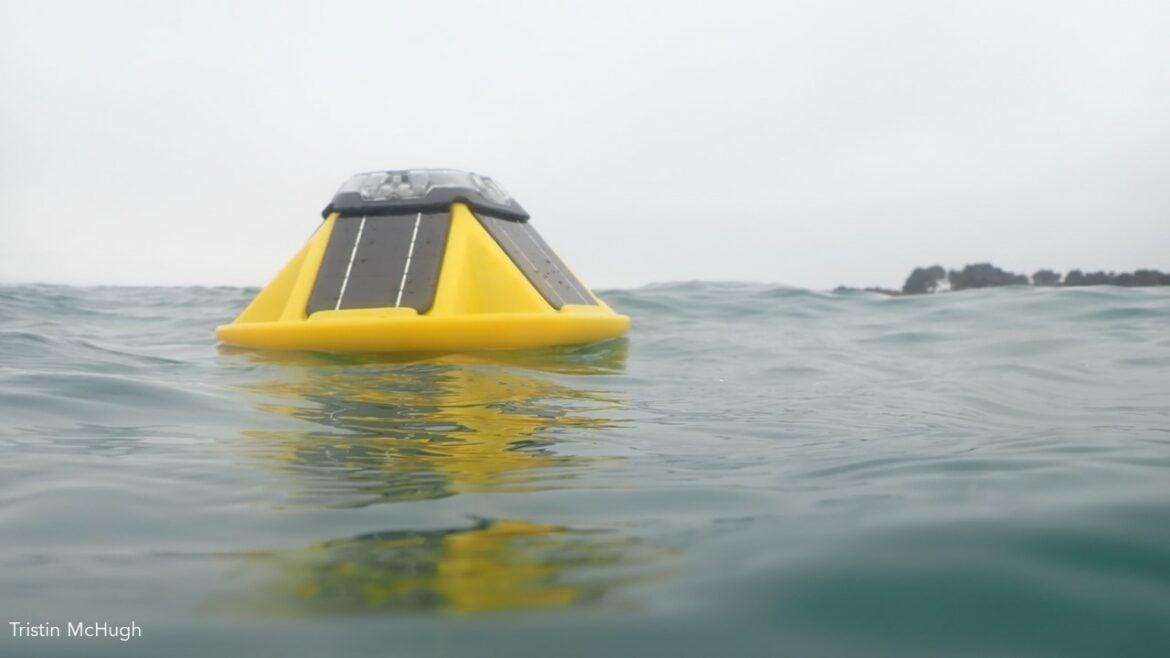 A solar-powered buoy collects data on ocean conditions in the middle of Caspar Cove. The buoy was donated to The Nature Conservancy by a nonprofit called Aqualink to monitor the site, which is an important area for kelp. (Courtesy of Tristin McHugh)

MENDOCINO Co., 8/24/21 — The Spotter is a buoy, developed by Sofar Ocean Technologies, that is  powered by the sun and about the size of a basketball. For the past month, it’s been collecting data on wind speed, ocean temperature and other conditions at Caspar Cove and transmitting them in real time. Aqualink, a nonprofit focused on ocean conservation, donated the buoy to The Nature Conservancy, as part of its effort to build a global network of monitors in sensitive aquatic environments, like coral reefs and kelp forests.

“We identified Caspar Cove as the site to test this buoy in because it’s relatively protected and it has undergone this really drastic ecosystem shift,” said Tristin McHugh, “kelp forest into urchin barren.”

McHugh is an ecologist who works on kelp restoration with The Nature Conservancy. She said a few years ago, a handful of factors compounded to create an ecological disaster for kelp. Starting in 2013, a virus began wiping out the sunflower sea star, a creature that preys on purple sea urchin. Then starting in 2014 and lasting through 2019, a marine heatwave created an ocean atmosphere that was too hot and inhospitable for kelp, who thrive in cooler water, to survive or reproduce. With no kelp to eat in deeper ocean waters, purple sea urchins transformed into grazers. They migrated to shallower waters and began feasting on the kelp forests of the North Coast, including Caspar Cove. That left the kelp forests decimated and replaced by an expanse of urchin.

McHugh said some of that began changing last year when the ocean began cooling. If you go to the local beaches, you’re bound to see bull kelp littering the shoreline. The kelp are popping up in areas that likely aren’t ideal locations for urchins and because the cool water is giving them a chance to recover. Even though it’s a good sign to see kelp recovery, McHugh said it was important not to get complacent since marine heatwaves are only expected to increase in the future.

That makes knowing the ocean temperature in real time more important. The Spotter allows for that real-time collection and transmission of ocean conditions. Researchers can also customize the buoy to collect different types of information at different depths through the nodes on the buoy’s smart mooring system.

“The ocean conditions are a very, very important piece of this larger puzzle that we’re trying to understand and solve,” McHugh said. “And this buoy, this sensor, allows us to look at a site very closely and maybe help us answer some of these questions we want to understand to protect and safeguard these places in the future.”

Getting local ocean data hasn’t been easy for researchers historically. In order to get that information, they had to get a data logger, swim to the spot where they wanted to collect data, install the logger and then come back in six months to a year to retrieve the batch of data. The pandemic showed that sometimes getting the necessary go-aheads to swim out to those sensitive or remote locations isn’t always possible, said Zack Johnson, an engineer with Sofar Ocean who works with Aqualink. Even with the approval to collect the data, it’s not in real time.

“It’s kind of week over week whether or not there’s coral bleaching events or mass die offs,” Johnson said. “It’s very similar with the kelp on the North Coast. It’s only a one hour delay between when the measurement is taken and when you receive the data.”

Having hyperlocal data is also essential because regional data collected by agencies like the National Oceanic and Atmospheric Administration don’t always reflect local conditions. “One reef might be doing fine and a neighboring reef might be in real trouble,” Johnson said. That’s why even the addition of one more sensor in a location can vastly improve the view of conditions and forecasts. Johnson said he’s working on getting more buoys deployed to the region.

The data isn’t just useful for conservationists and researchers, but other community members who recreate at the ocean, McHugh said. Divers, fishermen and kayakers, among others, can use the information from the buoy to determine whether it’s a good day to go out or whether they should wear a thicker wetsuit.

“It really has this dual application for both personal recreational use,” McHugh said, “but also these fundamental science questions.”

You can check out the data from the buoy at this link.