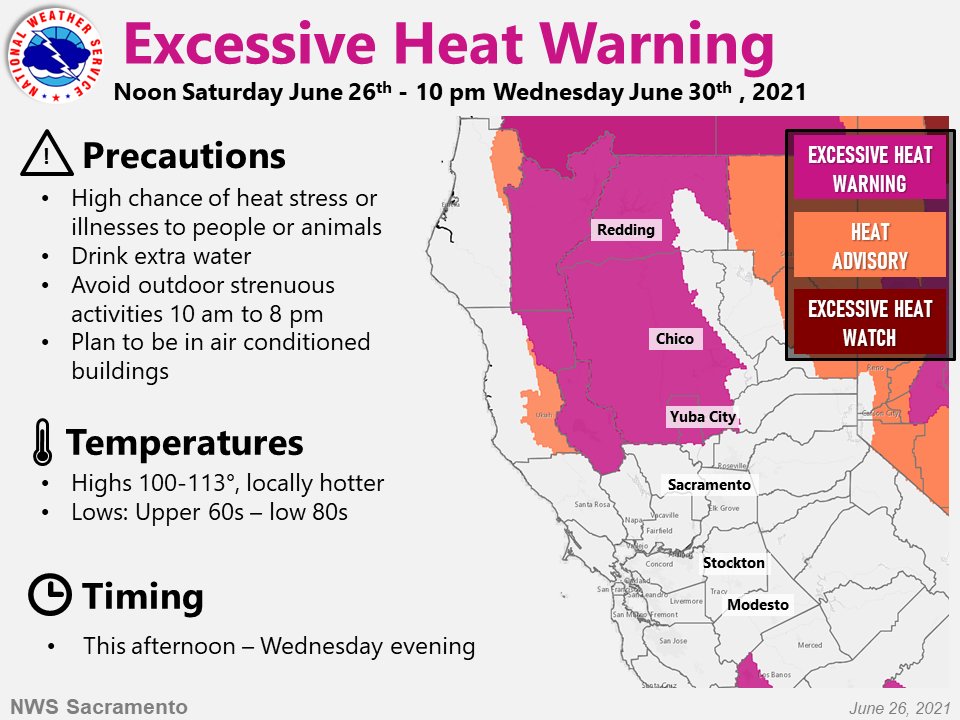 UPDATE 6/26/21 — A heat advisory has been issued for the Ukiah area and other portions of inland Mendocino County, while a heat warning remains in place for the Covelo area and all of Lake County as well as the Central Valley. Still the worst of this heatwave is expected to hit the Pacific Northwest, with temperatures in Oregon, Washington, and British Columbia surging to all-time highs.

ORIGINAL
WILLITS, 6/24/21 — Last weekend the southwestern United States, from Redding down to Texas, was sweltering, with daily temperature records shattered across the region; this weekend it’ll be the Pacific Northwest’s turn, with a high pressure ridge and heatwave that are likely to hit all time records. And it won’t be exactly cool in Mendocino County, but on the other hand, Portland is forecast to hit 113 degrees.

A meteorologist with the National Weather Service in Eureka explained the service’s heat warning: the excessive heat warning is mean as a marker of danger, not degree of certainty. Because Ukiah and other Mendocino Valleys that are somewhat near the coast tend to get a cool breeze in the evening, the overnight temperature will be significantly warmer there than in places like Covelo or Lakeport. That overnight cool temp allows people to recover. In contrast, in places further inland the high temps will remains overnight, increase the cumulative risk of heat exhaustion or stroke, since people don’t get a chance to cool down.

Whether you’re in the zone the heat warning or not, expect afternoon temperatures to be extremely high and take appropriate precautions, in the words of the meteorologist “check up on the elderly, and check the back seat of the car.” (Read more about the symptoms of heat exhaustion and heat stroke)

Today there is also a chance of thunderstorms and lightning strikes in the mountainous inland portion of the county, and in the August Complex burn scar; however, that risk will decrease as the week goes on.

Coming so close on the heels of the last intense heatwave, many are asking whether it is hotter than usual, and the answer is a resounding yes. Climate change has significantly raised the average temperature across the world, and in California.

Especially over the past 20 years, winters have been milder, and summers on average hotter, with increasingly intense heatwaves. While in the past scientists have been reluctant to ascribe individual weather events to climate change, that has been changing in recent years as the effects of climate change become more clear. Specifically, scientists are now much more likely to ascribe a magnification effect — so, though we cannot say whether this or that specific heatwave was caused directly by climate change, it has been certain that a heatwave is significantly hotter and more intense due to climate change. Even the workaday meteorologists at the NWS offices, who deal with the complexities and vagaries of daily weather (not climate) have acknowledge lately that these heatwaves are most likely more severe because of the effects of climate change and global warming.

One manifestation of this is the particularly severe, dry, and widespread drought currently afflicting just about the entirety of the western United States.

The last heatwave broke several daily high records across the southwest. That, of course, means that the hottest temperature ever for that date was recorded, not the highest temperature for any date.