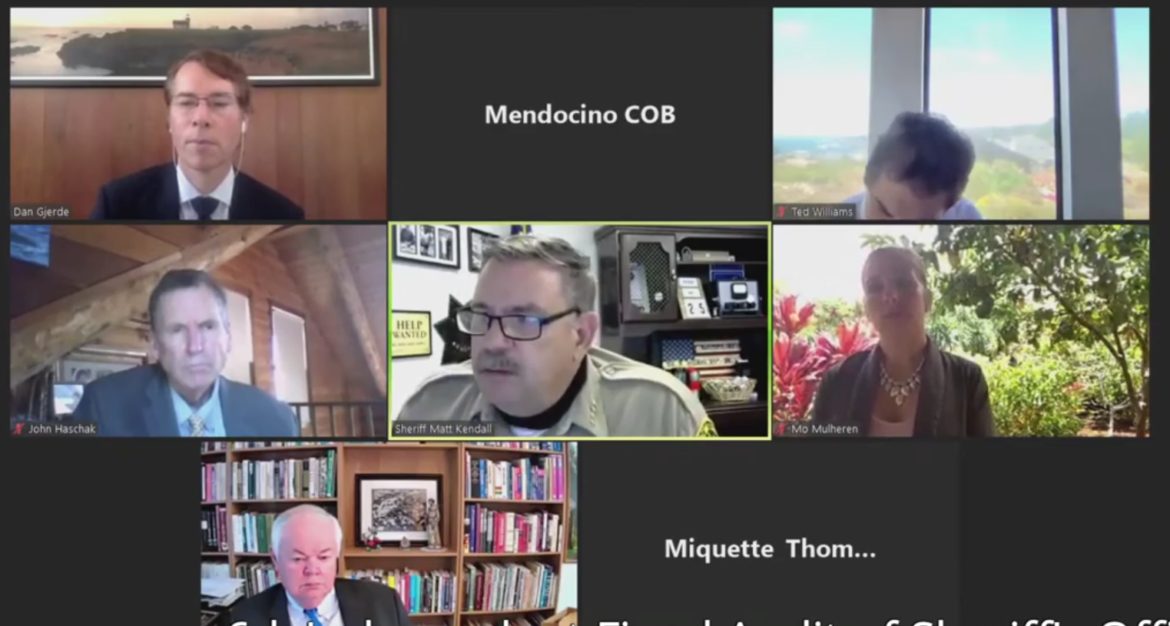 MENDOCINO Co., 5/26/21 — At an otherwise routine Tuesday Zoom meeting during which the Board of Supervisors were mostly ambivalent about a proposal by local social justice groups for a third party audit of the Mendocino County Sheriff’s Office (MCSO), Sheriff Matt Kendall provided the fireworks.

Kendall gave an impassioned speech about the risks deputies face, victims and accountability, and asked three times if the effort was a “witch hunt.” He described the work the sheriff’s office has to do everyday is combatting “a dragon with a needle.”

“I absolutely welcome a fair and independent audit, but this will not be a witch hunt. Because if it turns out to be that, then we’re going to see problems that we have never seen before in Mendocino County,” said Kendall.

Supervisor Ted Williams brought the audit idea to the board, saying he needs better information to make funding decisions. Williams said he anticipated that a third party audit would likely result in an increase, not a decrease to funding for the sheriff’s office.

“I think there’s some value in an outside group that has worked with other law enforcement agencies, looking at our particular problem and making some recommendations. Where are we strong? Where are we weak? Where do we need to fund more? I don’t see walking away with a recommendation to fund the [Sheriff’s Office} less. I just don’t see how that’s a possible outcome,” said Wiliams.

Supervisor Dan Gjerde questioned why the activists had not talked directly to the sheriff. He said he was a member of the Coast Democratic Club, one of the groups supporting the audit. He noted the Club had not invited the sheriff to speak about the issue prior to requesting the audit.

In the end, supervisors formed an ad-hoc committee composed of Williams and Supervisor Glenn McGourty, to figure out how to proceed on the question of better understanding the MCSO’s finances. The motion to create the committee passed unanimously.

The request for an audit came from the group South Coast Organizing for Radical Equity (SCORE), in conjunction with several other social justice groups. The request came on the one year anniversary of the murder of George Floyd.

“The common thread among all of us is that we’re asking for more and better transparency around this area of county spending,” said Miquette Thompson of SCORE.

“Our proposed solution is that we would like to see the Board of Supervisors adopt a comprehensive audit by a disinterested and objective third party that’s selected by the Board of Supervisors, and so we also believe that this audit needs to be both financial and demographic and nature and performance wise as well…This audit is not punitive but rather an effort to gain really important information that we think will guide and inform more responsible financials going forward. And we also believe that the audit is not an end but rather a starting point for determining a new path forward for accountability and public transparency and helping the Mendocino County Board of Supervisors develop a greater culture of transparency and accountability,” Thompson said.

“The people who came together to advocate for this proposal are actually from many different walks of life. We’re teachers and your community providers, emergency service workers, small business owners and community leaders. We have a mix of lifelong residents and newcomers, and also represent different places along the political spectrum. So, you know, most importantly we are your constituents and stakeholders so you know we want to thank you for the opportunity to be heard today and look forward to hearing the discussion amongst the supervisors around this,” said Thompson.

Williams said the audit was not an attack on the sheriff and said he thought all county departments would benefit from an audit.

“This isn’t out of an expectation that there’s any wrongdoing. Part of good government is periodically auditing, I asked when was the last audit? Staff was unable to provide any date, I don’t know that there’s never been one so I think it’s a good opportunity to look at strengths and weaknesses,” Williams said

Kendall took aim at the movement to defund the police.

“I’m going to ask again: Is this a witch hunt? If you want some data, right now in Mendocino County — I have six patrol deputies, serving 3500 square miles and 90,000 people. That’s a report on the data for today. Some of this stuff has just gotten completely out of control. Many cities where the police were defunding are now calling for that to be reassessed, due to a massive increase in violence in those areas. Mendocino county does not need to fall into those statistics,” Kendall said.

Kendall said he has to make hard decisions due to overworked staff.

“This is a public records act request. I don’t have the personnel to do that. So should I pull my personnel from the marijuana unit at a time when we’re being overrun? Do I call detectives off a caseload, upwards of 40 cases each is what these folks are carrying?” Kendall said. “Are we going to hire a deputy county council to work with us on this? Are the taxpayers willing to pay for that? Are these questions being asked and answered, or are we simply sitting here and wanting to jump on a bandwagon?”

Kendall didn’t like the idea that an outside auditor would be chosen by supervisors.

“The proposal also indicates that supervisors would choose the auditing agency. I’m not going to support any audit that I don’t have some input in. And, yeah, for me to even think about that would be shamefully ridiculous,” Kendall said.

Kendall spoke about the sacrifices that peace officers make locally and across the state, mentioning how deputies were recently shot at in a South Coast case.

Said Kendall, “It’s easy to forget about the victims of crime. I get to speak with them almost every day. Myself and the district attorney, the only two who are advocating for victims anymore. I don’t see any social justice groups advocating for the victims. When did they go out the window? When did we forget about them? So, back to the point. Anyone on this board who has heard that we need less deputies in Mendocino County?

“True leaders unite, they don’t divide. They don’t cast blame — they always look for remedies. Everyone realizes that we need to take a good hard look at things but it better not turn out to be a witch hunt, because I won’t put up with it.”