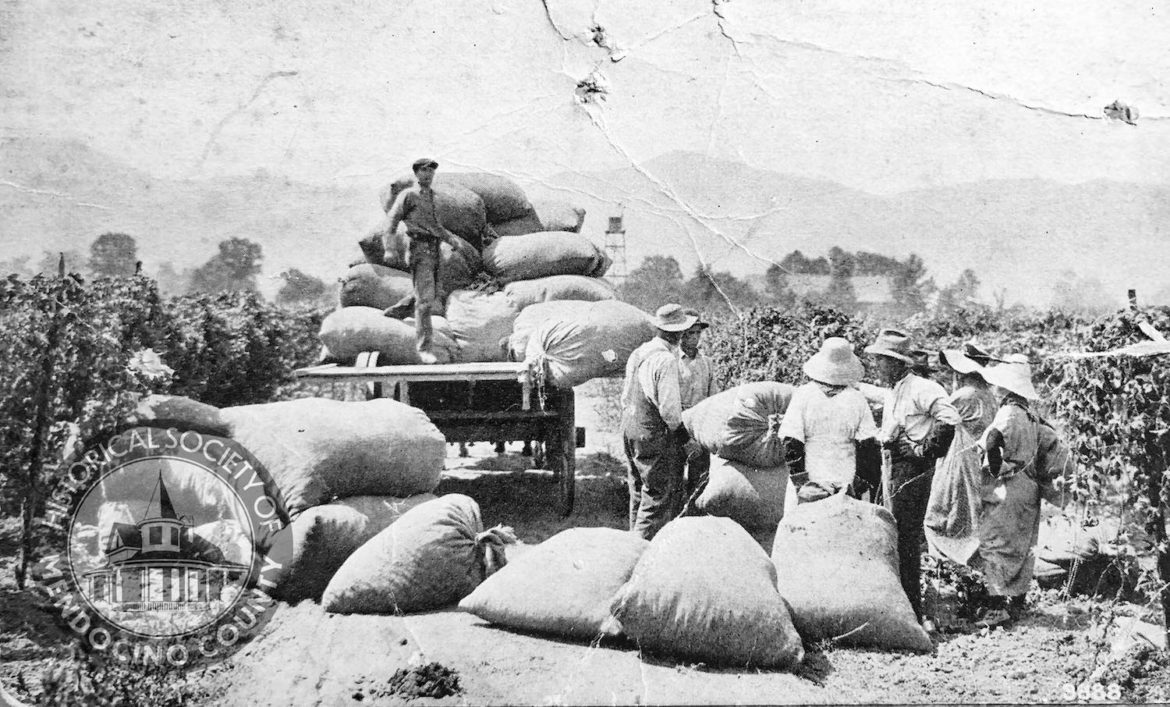 Picking Hops in the Ukiah Valley, 1920s, from the Historical Society of Mendocino County's archival collection

Editor’s note: Here’s the latest in our new history series, started in collaboration with the Historical Society of Mendocino County to share local history from the organization’s archival collections. Let us know what you think and what kind of local history you’d like to read more of at [email protected]

Elk, May 13 – Your correspondent had quite the long chat with one perfectly happy and exceeding optimistic individual today in the person of Supervisor Frank A. Reynolds. His exceeding happiness was due to the fact that the Navarro Highway project, in which he had about lost hope for this year, is about to become a accomplished fact, sufficient amount of bonds necessary for the work having been taken up by Orange and King counties, making it unnecessary for any discount to have to be handled by this county. His optimism is due to the fact that he considers the Navarro Highway merely an entering wedge which will lead to marked developments along the coast. He even voiced his hope that we may before long look forward to a Federal military highway following the coast line from end to end of the county; it must be understood that Mr. Reynolds has made a thorough study of the subject, and probably very few men in the state are better qualified to venture a prediction than he is.

It is generally considered that the immediate benefit to be derived from the Navarro Highway will be very great and those best informed agree with the Supervisor in thinking that it marks the beginning of an era of great prosperity and advancement for this hitherto isolated section.

Within the next few days the highway commission is to send a man to clear up some details in regard to right of way. Immediately thereafter bids will be asked for and if a satisfactory one is received work will commence at once.  The right-of-way details referred to concern certain changes as to the width of the road and ownership of timber on land granted for that purpose. Mr. Paul Dimmick, before whom the matter has been placed, feels assured that these matters can be satisfactorily adjusted, in which event they will be plain sailing and the much desired link connecting the valleys with the coast will be assured.

Supervisor Reynolds had full authority to act in the matter at a meeting with representatives of the Commission held at Ukiah Tuesday forenoon and it is evident from the result that the affair was placed in the best of hands. In fact, all the committee who have worked so earnestly for the success of the enterprise are entitled to the thinks of all coast residence. These gentlemen are supervisor F. W. Reynolds, R. T. Bourns, Paul Dimmick, Albert Brown and J. S. Ross. Thanks are also due to our sister counties, Orange and King, further timely aid in the purchase of bonds.

Contrary to a great many others, Supervisor Reynolds apparently approves the methods of the commission and expanding as much of the highway fund as possible and connecting the outlying districts with the more settled localities instead of spending the bulk of the money on those sections which are already provided with sufficient traffic both ways by rail and auto roads. He seems to feel that while some of these roads may not be the same acme of perfection, the expenditure of the vast sums to put them in perfect shape to the neglect of the less accessible parts would retard materially the development of those sections, which, with adequate means of communication with the business centers will undoubtedly tend to vastly increase the wealth of the state. No better instance could be cited then that of a large part of his own district which for months during the winter was practically cut off from the balance of the world. The word “was” is used advisedly as this will no longer be the case.

Mendocino – The Aurora Borealis or northern lights were quite plainly visible on this coast Saturday night. There was quite a beautiful display for a time of these colored lights so common to the people of northern latitudes, but rarely visible to us here.

Fort Bragg – Nightwatchman Brown gathered up a blind-pigger here Saturday evening under peculiar circumstances. He noticed a Ford car parked on the wrong side of the street and went up to the machine to remonstrate with the driver. The fellow was asleep and when he awakened from what was an intoxicated slumber he is said to have taken the Marshall for a prospective customer and to have offered him his last gallon of jackass. The nightwatchman promptly took him up, and not only took possession of the liquor but gathered in his car the booze peddler also. The man proved to be Victor Lehto and evidentially he had been making extensive sales for he had a $500 roll of greenbacks in his possession. He was placed in jail and when arraigned in Recorder Chapman’s court plead guilty and was fined $250. This he paid. Following his release, he was re-arrested by Deputy Sheriff Ward Reise on a charge of violating the Federal law and was taken to Ukiah. His auto probably will be taken possession of by the Federal authorities.

Ukiah – A deal was carried out yesterday where by Frank Sandelin, who has conducted the Palace Hotel for the past 15 years or more, sold the business and furniture of that hostelry to his son, Walter Sandelin, and Jack Meyers, who formally worked at the Hotel Cecille when that hotel was first started under the proprietorship of Malpas & Cosgrove. The purchase price is said to have been in the neighborhood of $17,000. The two partners will operate the place under lease.

Anna Morrison Reed died in San Francisco at the home of her daughter, Mrs. W. E. Travis, Monday night. Mrs. Reed was a native of Iowa and 71 years of age. She came to California when but 15 years of age and located in Mendocino County at an early date. She published several volumes of verse, and for many years past had been engaged in newspaper and magazine work, owning and publishing The Northern Crown, a monthly publication, and also editing for several years the Ukiah Times. She was well known throughout the county having visited every town and hamlet in it in the interest of her publications. She is survived by one son, Jack Reed, and four daughters, Mrs. W. E. Travis, Mrs. C. Stoner, Mrs. Wm. Shattuck and Mrs. Ed Keller.

Works preliminary to preparing for a large crew was infatuated at the Eel River dam Tuesday afternoon and has been going on all week. The force of men is not large at present, but will be increased as the work gets into full swing.

Dispatch Democrat. May 6, 1921 — APPEAL COMES FROM ENGLAND FOR CLEANER PICKING OF HOPS – Dealer States That Condition of Californias Is Leaving Wide Opening Which German Growers are Taking Advantage of.

Appealing to the hop growers of Mendocino County, in common with all others in California, to the end that are hops may be picked cleaner, Wignan, Richardson & Co., of London, England, have addressed a letter to the Dispatch-Democrat stating that unless our hops are improved as to the picking, the cleaner German hops will force them out of the market. The English Brewers are complaining and will turn to Germany where the growers and dealers are sparing no pains to capture the English trade.

Along with the letter comes a sample of German hops for the inspection of local growers. We have placed the sample with F. C. Albertson where all who may care to do so may see it.  The communication from the English firm is as follows:

We wish to lay before you our views regarding the picking of the 1920 Californian crop. We have on other occasions pointed to the fact that the hops were carelessly picked with too large percentage of stems and leaves, but this year the picking of the crop is generally regarded as simply scandalous. This criticism is severe, but it is justified. Your growers should remember that had it not been for the demand from England for “contracts” which we stimulated and encouraged, that practically the American hop acreage would have gone out of cultivation. We have kept the business alive and paid prices which showed the grower a handsome profit on his outlay. Then owing to-continued purchases the market mounted upwards with the result that at picking time the market reached the highest point. The Californian growers instead of appreciating what the English Brewers had done for their interests, and presenting the hops for market in best possible shape and condition, apparently in many cases tore down vines and forced everything they could into the bales making about the worst sample and appearance we have ever seen. It is not a “straight deal” to contract hops guaranteed to be clean picked, and then to allow the introduction of a certain quantity of leaves and stems. What is the consequence? Our Brewers are all extremely disappointed with your quality, and the feeling is so acute that the largest users of Californian hops have informed us that unless more supervision is exercised in the picking of the Californian hop, it will prejudicially affect their future dealings in American hops. You surely understand what this means, if you do not, we will explain. It means that the trade which used to go to America will go to the Continent, where the farmers and dealers are doing their utmost to capture the English trade both as regards price and quality. To illustrate our meaning, we are sending you a sample of Continental hops of the 1920 crop showing perfect picking and management. Unless your growers at once make up their minds to alter their methods, they will find that the English market is lost to them, and having lost it, they will find very great difficulty in recovering the trade. In any case they will lose it for years.