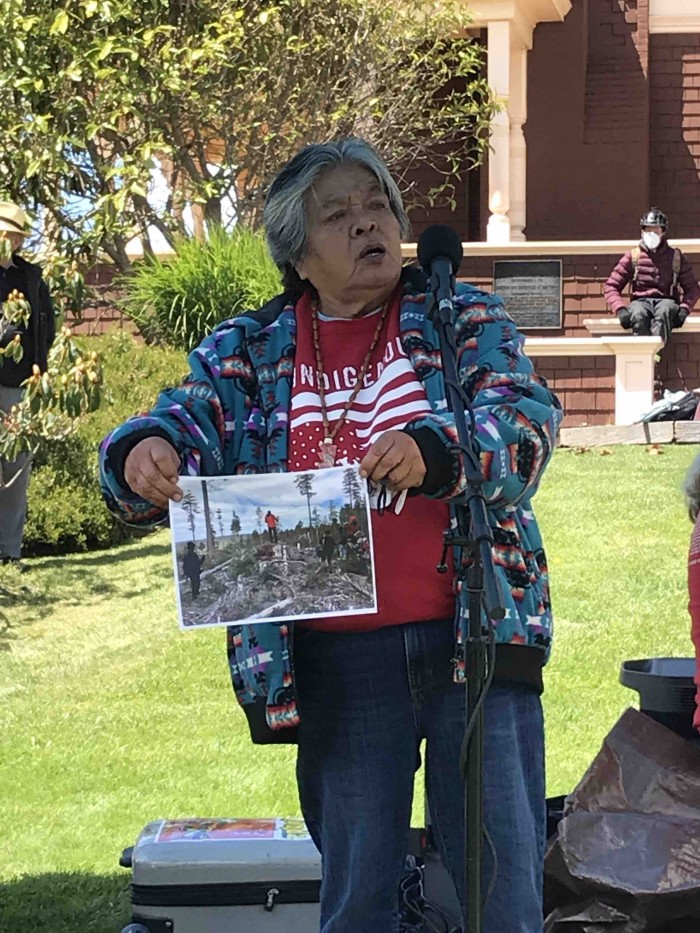 Priscilla Hunter holding a photo of her son, Michael Hunter, standing on top of a pile of slash in JDSF (Alicia Bales)

LITTLE RIVER, 5/6/21 — The past several years have seen renewed interest in the imperative of tribal sovereignty and the rights of indigenous people across the country, and Mendocino is no exception.

In the latest chapter of this 500 year long fight, Coyote Valley Band of Pomo Indians are fighting for greater rights to access their ancestral territory and protect historic tribal sites within Jackson Demonstration State Forest through a government-to-government consultation.

In broad strokes the Pomo are asking for protection of their archaeological sites, oversight of logging projects where native artifacts are concerned, a one year moratorium on logging, and ultimately for the entirety of Jackson to be made into a redwood forest reserve. Cal Fire says they are willing to compromise.

In an interview, Helge Eng, the deputy director of resource management for Cal Fire said, “They stated that they’re in favor of no logging on Jackson and you know I explained why we do the things the way we do there is a reason for it. I think that once we’re given more of an opportunity to explain our side of the story and the rationale for why we’re harvesting timber and why we’re cutting trees we’ll be able to reach agreement.”

The Coyote Valley Band of Pomo Indians and Cal Fire had their first government-to-government consultation meeting on April 22, where they discussed the protection of Indigenous cultural resources and sites within Jackson Demonstration State Forest and Cal Fire’s management of Jackson, a 76 square mile (48,652 acres), working forest between WIllits and Fort Bragg.

Although representatives speaking for the tribe and Cal Fire, respectively, portrayed positive views of the April meeting but separate phone calls after the fact indicated that they are on very different pages.

The Coyote Valley Band of Pomo Indians asked for the government-to-government consultation for the stated purpose of protecting the ancestral northern Pomo and Coast Yuki archaeological sites within the forest and to support local conservationists who are advocating for a one year logging moratorium in Jackson. This is the first time Cal Fire has participated in a government-to-government consultation, with an native tribe regarding Jackson Forest, a process which allots Indian nations more power than an individual to preserve cultural resources in which government entities confer directly with sovereign tribal nations.

Back in 2014, former Governor Jerry Brown signed AB52, the Native American Historic Resource Protection Act, into law, amending the California Environmental Quality Act (CEQA) to include “tribal cultural resources,” in the list of factors that must be considered when deciding whether or not a project will have a significant effect on the environment and consequently whether or not it should be allowed to move forward.

So, theoretically, listing sites within the Jackson as tribal cultural resources would add greater protections to Indian resources in the forest and require that Cal Fire make further efforts to mitigate adverse impacts to the sites, which Girvin said is urgently needed as their resources have been mistreated in the past.

But on the Cal Fire side of things, Eng, who has been organizing the consultation with the tribe, says they’re doing a fine job as is.

“We have a pretty good track record of protecting historical sites and cultural sites,” said Eng in a phone interview. “I mean there are laws and regulations and oversight by our archaeologists and we actually apply more scrutiny to cultural values and more protection to cultural values than the law requires — more than the minimum under law…I respectfully submit that there is not a large scale pattern of inadequate protection.”

Clearly the Coyote Valley Tribe and Cal Fire are not quite on the same page concerning the main issue being tackled in the consultation — the protection of native sites and resources.

Eng said that Cal Fire is willing to compromise with the tribe, which has made clear that they do not want logging in the forest and that they desire the opportunity to oversee evaluations of cultural sites done by foresters and Cal Fire archaeologists. But it’s not clear how far they are willing to go.

“Our compromise would be bringing the tribe to the table so they can have a say in the management of the resources that pertain to the tribe such as cultural values and other and protecting tribal resources,” said Eng. “That’s something we’re willing to step up and both provide a seat at a table and potentially fund joint projects, demonstration projects and studies to better inform the public and other landowners on how to include tribal priorities in land management.”