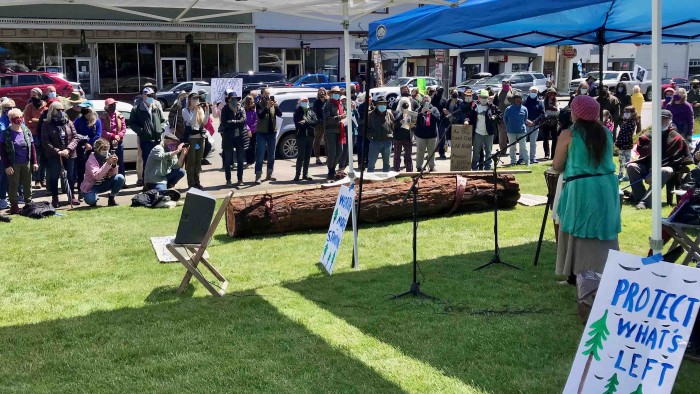 LITTLE RIVER, 4/29/21 — A rally of around 150 people gathered on Sunday in front of Fort Bragg City Hall to advocate for substantial changes in Cal Fire’s management of Jackson Demonstration State Forest and protest against logging projects that could begin as soon as next week. A colorful group attended on Sunday. People of all ages gathered with signs and banners on the lawn in front of city hall.

Groups represented at the rally included the Coyote Valley Band of Pomo Indians, who are currently in a government-to-government consultation with Cal Fire, the Mendocino Trail Stewards, a local conservation group that has been advocating for over a year to create a 20,000 acre reserve on the west side of the forest, shielding it from most logging — and a group of activists loosely associated with Earth First!, who are supporting a tree-sit in the forest and organized a civil disobedience protest earlier this month.

“I’m tired of all of this,” said Priscilla Hunter, a village elder of the Coyote Valley Pomo Band of Indians who spoke at length at the rally. “The forest up here, Jackson Forest, I don’t know what [Cal Fire is] ‘demonstrating’, but it’s bad. This whole Mendocino was terrible to the Indians and we feel it — we felt it, it’s a cry of my ancestors. I feel every time, every time they’re cutting. We hear our ancestors cry — the tribe, and our people, and we say no more!”

As part of a longer speech about the horrors committed by white settlers against Native people in Mendocino, Priscilla Hunter compared the pain caused by the partial destruction of the Notre Dame chapel in Paris, which burned in 2019, to the continuous destruction of Indian sites over many years.

“That’s the way we feel about our sites being destroyed, but it’s not once, not twice, it’s every day of our lives,” said Hunter.

It’s worth noting that although the Coyote Valley Band of Pomo Indians only started looking into the upcoming logging projects, the ones that were being contested at the rally, in February, they have been fighting to have a say in the future of land in Mendocino County, which is their ancestral territory for much longer, essentially since white european settlers arrived in Mendocino.

“Coyote Valley is here to help preserve what you have left even though we just get to borrow it now,” said Michael Hunter, chairman of the Coyote Valley Band of Pomo Indians in a speech following his mother’s. And responding to a “give it back,” call from the crowd he said “I don’t want that back. You guys gotta fix it. You don’t get to give me damaged goods back.”

Later on in his speech Michael Hunter continued, “Coyote Valley’s here for these trees, we’re here for you, because of this humble woman behind me [Priscilla Hunter] and we’ll fight the good fight. But I ask you, help teach your people, tell them who the great people were of this ground here, tell them who we were… If there’s one thing to leave today — we are here for you, you are here for us. We have the same common ground. It’s been a long time since we have some of the same common ground but we do. Now here’s our bridge.”

The three groups that attended the rally, as well as unaffiliated protesters, all have different visions for the future of Jackson, but, broadly, there are a few primary notions that bind them all together including that it’s time to change the mission of Jackson Demonstration State Forest and rather than using the land to demonstrate logging techniques, it should be used to show how redwood forests can sequester carbon and increase the health of the local and global environment and that the timber harvest plans lined up to begin as early as next week should not happen.

Some people, like the Trail Stewards, want to create a 20,000 acre reserve on the west side of the forest. But the Coyote Valley tribe wants the whole of Jackson State Forest to become a reserve. There was, however, general agreement among rally goers that the logging projects that Cal Fire may begin as early as next week should be at least delayed.

Alicia Bales, program director at KZYX, did the on the ground reporting for this article.

One thought on “Protestors rally in Ft. Bragg against Jackson Forest logging — Pomo leaders ask for logging to end on their ancestral land”