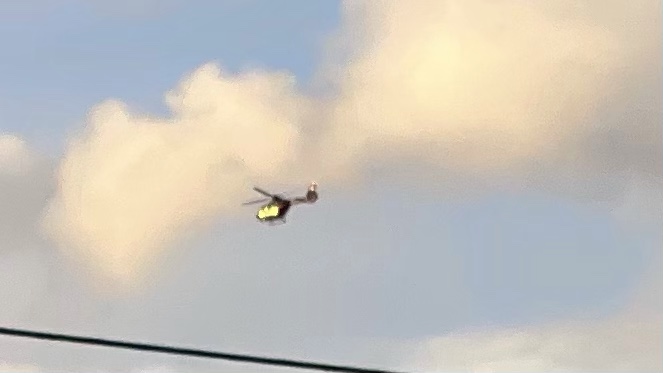 A medical helicopter flies northwest over the Little Lake Valley towards a car crash. (A.F. Baumann / The Mendocino Voice)

UPDATE 8:02 p.m. — Some more information coming. The crash appears to have involved at least two cars and a potentially a big rig. Multiple people have been airlifted away from the scene. A call has gone out for CalTrans to assist in a major oil clean up, and the cars will need to be towed. At this time it appears that the road is closed, but even after one-way traffic control begins, expect major delays.

UPDATE 7:32 p.m. — It appears that the highway will be closed at Reynolds Highway and U.S. Route 101. More than one helicopter is being sent to the crash site, indicating multiple major injuries.

ORIGINAL
WILLITS, 4/20/21 — A crash north of Oil Well Hill on U.S. Route 101 north of Willits, has resulted in at least one person sustaining major injuries. Authorities will be closing the 101 near mile marker 51, to land an ambulance helicopter.