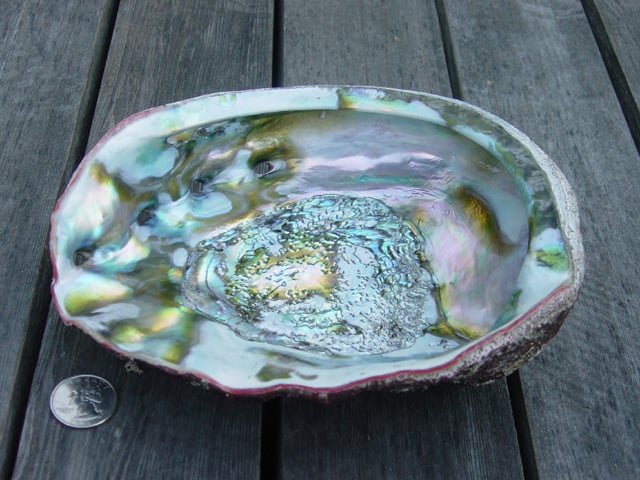 The inside of a Californian red abalone shell, Haliotis rufescens, this red abalone was harvested on North California coast in May, 2005. By user By Kowloonese from Wikipedia under a Attribution-ShareAlike 3.0 Unported (CC BY-SA 3.0) Creative Commons license.

MENDOCINO Co., 3/21/21 — The recreational red abalone fishery will stay closed for the next five years, until 2026, to allow the population to recover and survive after the decline of the bull kelp forests and resultant increase in purple urchins have contributed to significantly smaller abalone populations.

The recreational red abalone fishery was first closed by the Fish & Game Commission in 2017 due to these concerns, and the commission extended the closure until 2026 during a meeting last December. According to the announcement, the agency is developing a Red Abalone Fishery Management Plan to assess potential re-opening dates, which can be found here. There are currently extensive local and statewide efforts underway to restore the kelp forest and reduce the purple urchin population, which has contributed to the decline of red abalone — you can read more of our coverage of kelp forest restoration efforts in Mendocino County here.

Here’s the announcement from the California Department of Fish & Wildlife:

The Recreational Red Abalone Fishery to Remain Closed Until 2026While the spring season typically signals the start of the recreational red abalone season, CDFW reminds anglers that the northern California recreational red abalone fishery will remain closed until April 1, 2026. Red abalone stocks continue to be impacted by large scale die offs in this area due to the collapse of the bull kelp forest, which is their primary food. At its December meeting, the Fish and Game Commission extended the fishery closure for an additional five years to 2026. The Commission closed the fishery in 2017 because of the mortality of red abalone populations due to environmental stressors. The current poor environmental conditions and depressed abalone stock were caused by a series of large-scale ecological impacts. These included a massive marine heatwave and El Niño in 2014-2016, the local extinction of sunflower sea stars due to disease and subsequent population expansion of purple sea urchins. The result was a major shift from a robust healthy bull kelp forest ecosystem to one dominated by sea urchins with little kelp or other algae. Such conditions lead to starvation and mass mortalities of abalone, which need kelp to survive.

While the presence of persistently stable sea urchin dominated areas is not a new phenomenon in California, the more than 200 miles of poor conditions across the north coast is unprecedented. An Interim Action Plan for Protecting and Restoring California’s Kelp Forests was developed to guide the state’s efforts to help understand and improve the situation. Several projects are focused on reducing purple sea urchin populations at strategic areas of the coastline. The goal is to create patches of healthy bull kelp that will provide a source of kelp spores that may lead to recovery of the kelp forest when environmental conditions become favorable. Recovery of bull kelp forests and the diverse ecosystem they support will take time. Thus, the extension of the abalone fishery closure is needed to allow for recovery and protection of surviving abalone. When reopening of the fishery is considered, it will be guided by the Red Abalone Fishery Management Plan, which is currently under development. More information about the Red Abalone Fishery Management Plan can be found here.