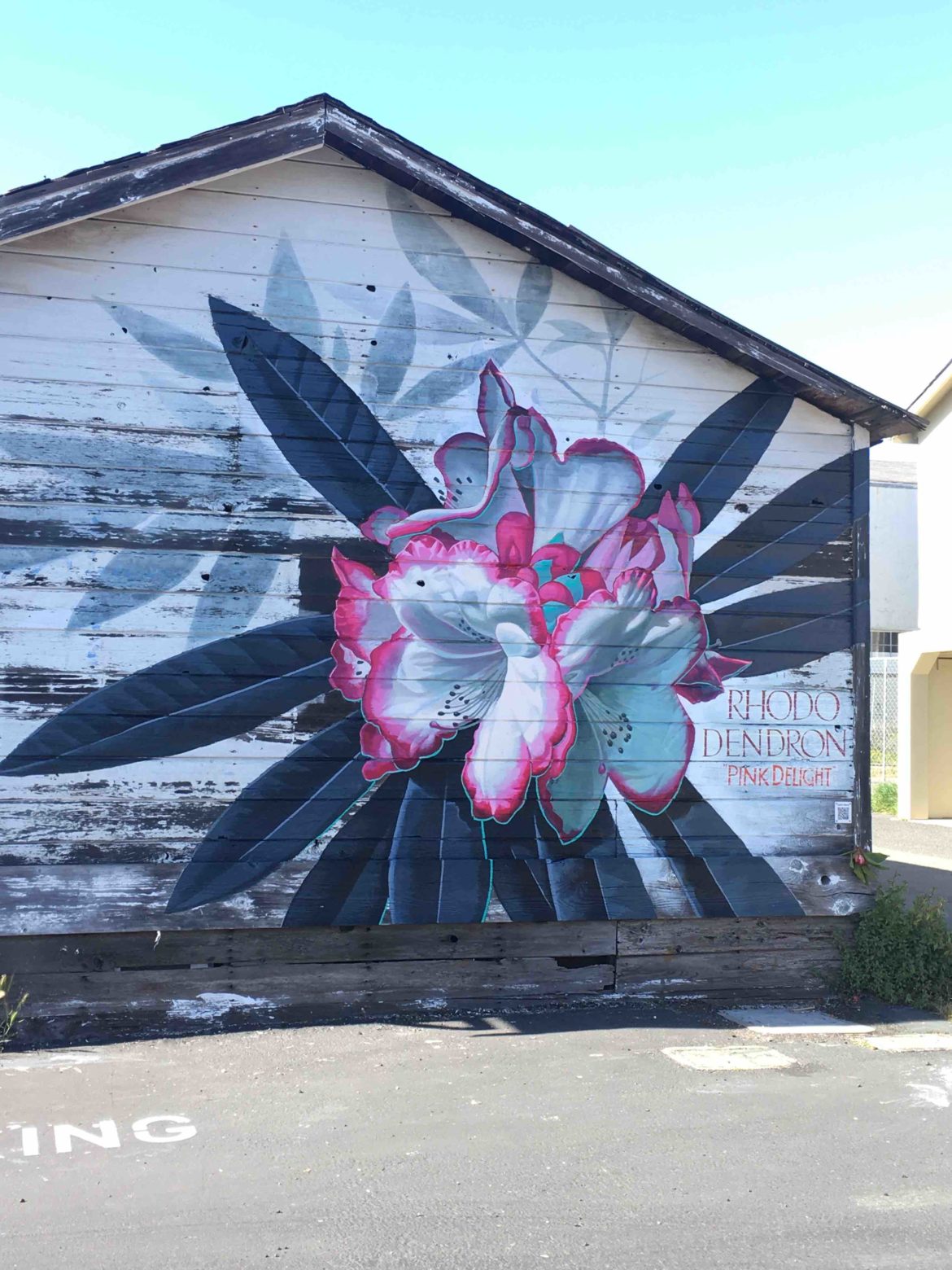 The Rhododendron - By Jacob, aka Ferric Decay(Point Arena tattoo artist)

FORT BRAGG 3/11/21 – On one downtown Fort Bragg building is a fortune-telling cat. Up the block on another building is a sleeping feline.  A well-known tattoo artist painted a gigantic rhododendron flower in a downtown alley. There is a treasure map worth of sights from the woods on the side of a long railroad shed at the Skunk Train depot.  The emerging art looks spontaneous, like it might even the work of a talented graffiti artist. It’s actually the product of Lia Wilson’s Alleyway Art Project for the Arts Council of Mendocino County over the past several years.

On Monday, Wilson told  a receptive Fort Bragg City Council about a big expansion planned in local murals. She described the 11 murals done or in the works in Fort Bragg, including 5 completed, 3 to be done by the end of summer and 3 more relying on the completion of grant funding. She wants to  more than double that number and make the murals yet another reason to come to Fort Bragg by creating art that people will get out of their cars to search for and walk, and buy, around downtown. She wants building owners and artists to get involved and join the excitement. When done in Fort Bragg, she says it could be a great option to repeat in Willits and Ukiah.

Wilson hopes for city funding  for a project that could make Fort Bragg a top city for public art. She told the council on Monday that an anonymous group of local art lovers has pledged a matching grant of $18,000 to create 8-12 more murals and asked the council for help in creating even more murals. The item was not on the agenda for action but will be at the next meeting on March 22 for discussion of the request..

“They would like to see strong artistic voice in these and would like them to be locally relevant. The goal is to entice more foot traffic. These murals have to be extraordinary enough to inspire  people to get out of their cars and walk around,” she said.

Not all the art is or will be in alleys, but Fort Bragg’s old fashioned, narrow backdoor roads give a hidden pizzaz to the works that she hopes will provide an extra thrill to tourists, many who come from newer cities where no secrets are to be found on the winding narrow lanes that were a feature of American towns built through the end of the First World War.   It was the town itself that inspired Wilson to launch the project.

“I looked around and said we have a bunch of artists here and we have some great walls. We can probably gather some people together and eventually create a mural walk,” Wilson said in an interview.  When enough murals are painted for a mural walk she sees that leading to an arts and culture district downtown.  All the excitement about Fort Bragg as a public art city could lead to more grants and more art, she told the council.

“A mural walk would elevate Fort Bragg’s sense of place. All of these people walking around looking at murals will bring people to the central business district,” she told the council.

Council members expressed support for the concept and provided praise.

“I love it. We need more. I agree,” said Councilmember Tess Albin-Smith.

Vice Mayor Jessica Morsell Haye said she would have to recuse herself from any vote next time as Wilson is her sister-iinl-aw.

Wilson’s said the city would benefit from increased foot traffic, increased property values and the fun of living among art.

“We have an $18,000 challenge grant on the table if you invest now, you get a lot more impact,

This all goes back into the community, local artists are going to spend this,,” Wilson said.

Also Monday night, the council approved a letter in Support of the $1.9 trillion COVID-19 Federal Relief Plan that passed the U.S Senate this week.  The plan, as it currently stands,  could mean $1.372 million for Fort Bragg, city manager Tabatha Miller told the council. The bill still will go through reconciliation with the House of Representatives version.  Separately, the council also approved an application process for local businesses impacted by COVID-19 to get California funds through the CDBG grant program..

The council also voted unanimously to extend the agreement with Solid Waste of Willits (SWOW) for the company to continue operating the Caspar Transfer Station, which is 60 acres on Prairie Way.  Mendocino County and city jointly lease the facility to SWOW. County supervisors are also scheduled to vote on the extension. Fort Bragg’s trash, collected by Waste Management, goes to the transfer station in Willits. The Caspar transfer station is used for private trash disposal.

Information about the two photos with the story:

Matsya and the Great Deluge

Co-Sponsors: Alan and Laura Limbird who also own the building, Flockworks, The Mendocino County Tourism Commission, Allie of Heavenly Soles and her friends and family, and Ky and Ian.