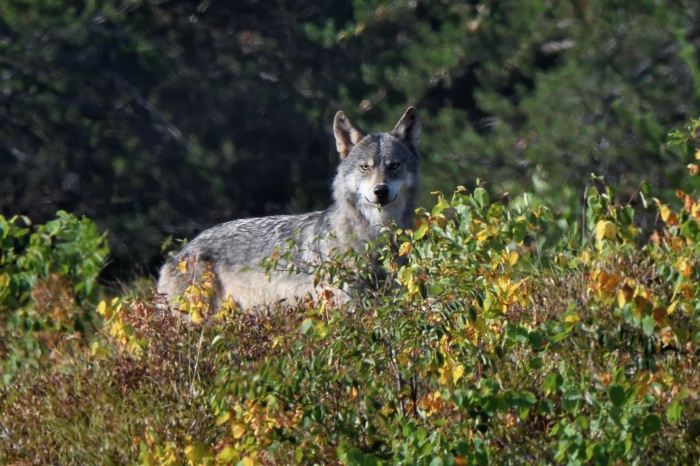 LITTLE RIVER, 3/24/21 — A grey wolf has ventured further south than any other in almost a century. According to the latest information from the California Department of Fish and Wildlife, the wolf, unceremoniously named OR-93, was in central Fresno, west of SR-99, on Sunday night at around midnight. That is the last known location of the wolf, who is fitted with a tracking collar that sends out a signal, marking its location, every few days.

The last time a grey wolf was recorded to be this far south was in 1922 in San Bernardino County. The appearance of the wolf in this area of California may receive some mixed responses. Conservationists have been trying to repopulate grey wolves in California, where they historically have lived, for decades. But ranchers have reason to be concerned about wolves returning to the state, as they are a predator to cattle.

On Monday, the California Department of Fish and Wildlife (CDFW) sent out a press release announcing that “OR-93,” a young, male wolf from Oregon’s White River Pack, which roams south of Mount Hood, left his friends and actually, the whole state, making his way south down to California.

Fish and Wildlife is very excited about this new chapter in the book of wolf conservation and repopulation.

“This is a great ecological story,” said Jordan Traverso, a spokesperson for Fish and Wildlife. “Whether it’s protections or conservation projects that have added better habitat, or prolific breeding, or who knows what, something is bringing the wolves back. We at the department believe they belong here and we like it when things that belong here come back.”

Traverso noted that not everyone is as elated as CDFW about the OR-93’s voyage into the region. “Ranchers are obviously concerned because they [wolves] are an additional predator to livestock so we have to work with that constituency,” she said.

Although fairy tail wolves are big, bad, and dangerous to humans, CDFW says that the real ones shouldn’t be feared. “Grey wolves pose very little safety risk to humans,” wrote Fish and Wildlife in their press release about the matter.

In fact, wolves are native to California. According to the Center for Biological Diversity, the creatures were once common along the west coast from Washington all the way down to Southern California. However, due to hunting, the species completely disappeared from the Golden State by the early 1920s. They only started reappearing, sparingly, in the last decade.

Wolves are a keystone species. As a predator, they play a crucial role in regulating populations of their prey, including deer and elk, and help hold the entire ecosystem in a healthy balance.

However, wolves are politically contentious. They threaten the ranching industry, as they can attack and kill valuable livestock. So it is safe to say that not everyone will be happy to see the creatures return to California.

Grey wolves are a state endangered species making it illegal to hunt, hurt, or kill them.