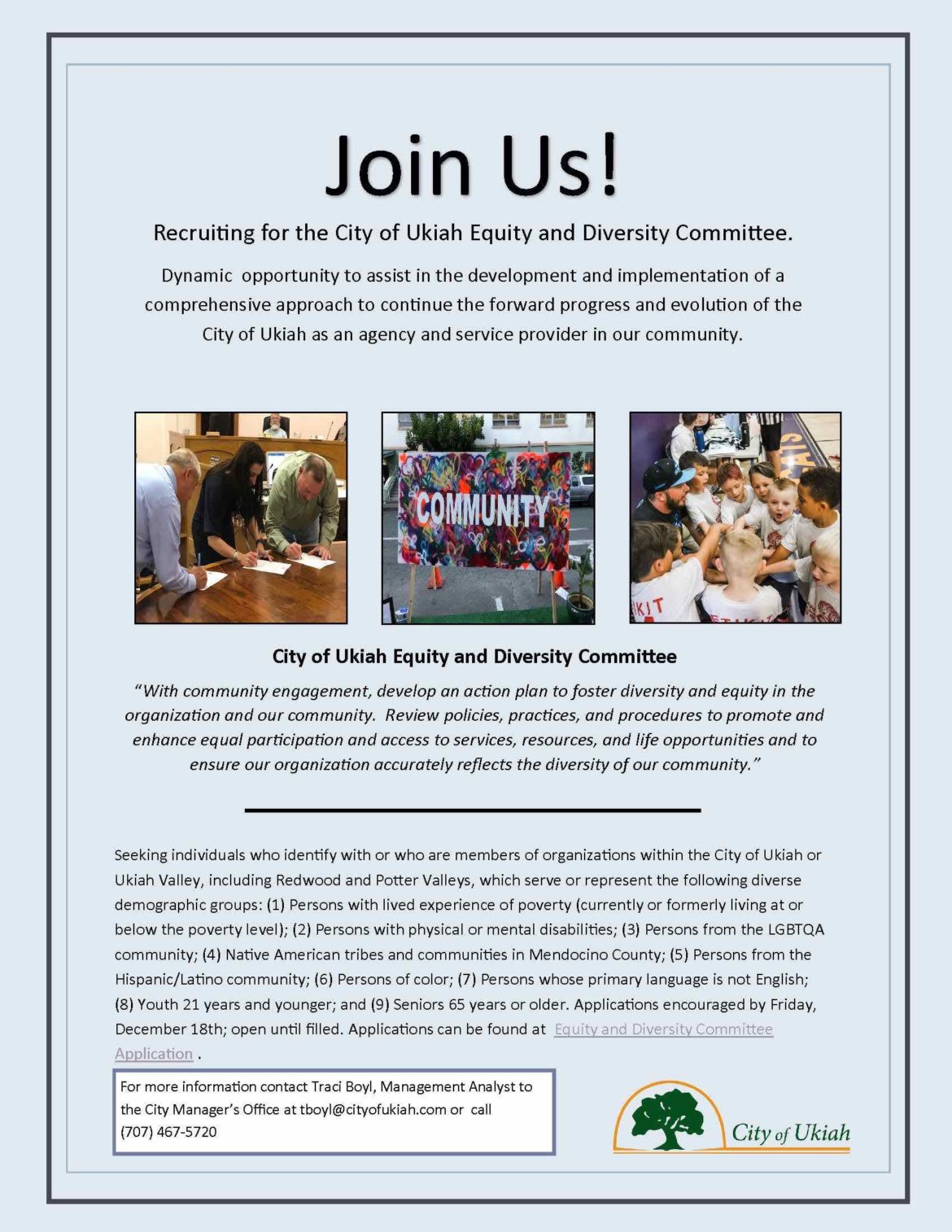 The flyer states that applications would be accepted through Dec. 18, however since there remain two vacancies, applications for those two slots are still being taken.

MENDOCINO Co., 2/18/21 — The Ukiah City Council established the new Equity and Diversity Standing Committee at its regular Wednesday meeting and appointed seven community members to fill the committee, with each member representing a different demographic segment of the community. This plan has been eight months in the making. The city is currently seeking two more members to represent seniors and persons whose primary language is not English. Though the selection for the other seats was completed in December, due to the vacancies the search for the remaining two continues.

The seven will join Mayor Juan Orozco and Councilmember Josefina Dueñas on the new committee, which will hold open public meetings and be subject to the Brown Act. No meeting schedule has yet been set. Traci L. Boyl, management analyst to the Ukiah city manager’s office, said the first meeting will likely be in March, when a chair will be picked and a meeting schedule and initial priorities set.

Councilmember Mari Rodin, who was recently appointed, had been ready to serve on the committee but she deferred to Dueñas when Dueñas expressed interest in serving. The seven members of the committee were not required to self-identify with the named segment they will represent, but were picked because they were persons who served in organizations or on boards that work with the named diversity.

Members representing the diverse areas of the community:

The city will continue to solicit applications to fill the remaining positions,

“To see each of you on my Little Brady Bunch screen, on Zoom, I am so proud this community has decided this is important,” L. Janie Sheppard told the council. Sheppard has been involved in diversity issues for decades and has worked for various non-profits. (It’s worth noting that the Ukiah Council uses an alternative program to Zoom).

“As I watch the news and live my life every day, sometimes I wonder. But when I see you and what you are doing, it gives me hope,” Sheppard said at the meeting.

On July 1, 2020, the City Council established the Diversity and Equity Ad Hoc committee consisting of Orozco and former councilmember Maureen Mulheren, and support staff from the City Manager’s Office.

The Ad Hoc Committee reviewed research and analysis regarding community demographics, city staff diversity demographics, and internal policies and procedures, the city staff report said. According to said report, “The Ad Hoc concluded that a Standing Committee would be the most effective and efficient mechanism to ensure extensive ongoing community engagement from the diversity of demographic groups within the City of Ukiah, successful plan development and implementation, and to provide a process for annual review, oversight, and updates as necessary,” the staff report said.

On Oct. 7, 2020, the City Council voted to establish the 11 member Equity and Diversity Standing Committee and began taking applications.

“The structure of the standing committee is designed to ensure optimal representation from the diverse demographic groups represented in the population of the City of Ukiah and the larger community living and working in the Ukiah Valley.” One does not need to live in the city to be on the standing committee.

The Council voted Wednesday to dissolve the ad hoc committee and form the new standing committee with the seven applicants it received and the two council members.

In an interview, Traci Boyl said the standing committee is not designed to handle individual complaints, which will continue to be handled by the risk management and human resource departments.

What will they be tasked with doing?

“The idea is to really address equity in the delivery of city services, internally and in the ways we operate as an agency.”

In another matter, the Council heard that newly proposed Federal Emergency Management Agency (FEMA) maps could expand the area of Ukiah prone to flooding — something that has ramifications for insurance.

“We had a meeting…with FEMA today, and we got some somewhat disturbing information,” Tim Eriksen, public works director for the City of Ukiah, told the Council.

“It involves a higher floodplain which would then put a lot of properties into the floodplain and cause folks to have to get floodplain insurance,” Eriksen said.

The process is just beginning.

“FEMA isn’t being overly heavy handed. Some of the areas are showing up as flooding and we have lived here all our lives and never seen the flooding,” said Eriksen.

Eriksen said it won’t be approved for a year and a half and the city has pictures and data that show a different picture. Those are being presented to FEMA.

“It’s sort of their first blush. FEMA is the kind of agency that is overly conservative and starts out with the approach that things are worse than they are and we are trying to reel them back in and they are not opposed to that,” Eriksen said.

City Manager Sage Sangiacomo said it was important that the council be prepared for this issue well ahead of time.

“The cost can be great to property owners if property is unnecessarily included in a floodplain with the flood insurance,” said Sangiacomo.

He said the city has real world data from 2006 onward that show a very small area of the city subject to flooding.

“I appreciate the public works department engaging on this but at some point it may be necessary for the council to weigh in at a political level to ensure that the maps are not adopted with that data,” Sangiacomo said.

“Tim just had this meeting today. We just wanted to be sure the Council was brought in at the very earliest point…At this point we don’t have anything to share outside of the concepts,” Sangiacomo told the council.